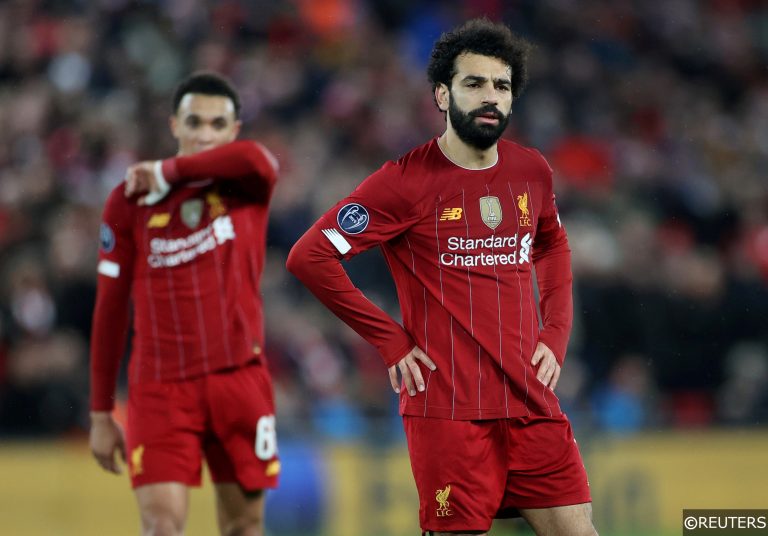 Our expert football tipsters delve into all the Soccer Saturday fixtures to bring you the very best Sky Super 6 predictions for Round 63 this weekend.

You can see all the selected fixtures, along with our carefully researched correct score predictions, below and you can find even more predictions over on our football tips page.

Liverpool, despite their slip at Manchester City, look determined to break as many Premier League records as possible this season and there was no sign of them slowing down in midweek. They have kept a clean sheet in nine of their last 11 Premier League matches at Anfield and have won to nil against Burnley already this season, so we can see another shutout heading their way on Saturday. With an average of 2.7 Premier League goals per game at home this season, a 3-0 triumph for the Reds looks the way to go.

You can find the rest of our analysis and betting tips on our Liverpool vs Burnley predictions.

West Brom’s promotion surge continued with their efficient display at home to Derby this week, a result which made it three wins on the bounce for the Baggies. We’re expecting another solid performance at the back on Saturday against a Blackburn side that have failed to score in three of their last six Championship outings. Another clean sheet certainly should be on the cards, and with West Brom averaging 1.74 goals per game this season and Blackburn shipping two or more in six of their last seven, a 2-0 scoreline could be on the cards.

You can find the rest of our analysis and betting tips on our Blackburn vs West Brom predictions.

Preston come into this game with just two wins from their last ten in the Championship but still harbour hopes of a playoff finish, but visiting Nottingham Forest have proven strong on their travels and should be a match for them. Forest boast the third best away record in the league and have only lost three times on the road this season. Defensively they aren’t great though, and with both teams scoring in six of their last eight away and in five of Preston’s last seven at home we’re not expecting clean sheets. After Preston’s 3-1 defeats at home to QPR and Cardiff, another 3-1 win for the visitors is the order of the day.

You can find the rest of our analysis and betting tips on our Preston vs Nottingham Forest predictions.

Middlesbrough have enjoyed something of a resurgence since Neil Warnock’s appointment and should have enough to get a win against a Bristol City side that have lost four of their last five away matches in the Championship. Boro’s strengths lie in their back line, with only two of their last ten Championship assignments seeing both teams get on the scoresheet. Their last six league wins have been to nil, and with four of those ending 2-0 that’s the scoreline we’re predicting here.

You can find the rest of our analysis and betting tips on our Middlesbrough vs Bristol City predictions.

Sheffield Wednesday visit QPR on the back of a three league losing streak in which they have conceded eight goals, and with at least three goals being scored in each of their last four away games we’re expecting goals to flow here. The visitors’ poor form and QPR’s home advantage gives the hosts the edge here, and with each of the two meetings between these sides this season ending 2-1 we think another three goal event is on the cards. Wednesday lost by that very same scoreline in their last away game at Swansea, so a 2-1 QPR win is our pick.

You can find the rest of our analysis and betting tips on our QPR vs Sheffield Wednesday predictions.

It’s a huge relegation six-pointer at Oakwell on Saturday as Wigan look to extend their promising form with a possible 12-point deduction hanging over their heads. The Latics have claimed 19 points from their last 24 available, with no other team bettering that record over the last eight games. They have kept eight clean sheets in their last nine games following their 1-0 triumph over QPR in midweek, and they could be set for another against a Barnsley side that have lost seven times on home soil this season. Four of Wigan’s last five have resulted in a win to nil and, with the visitors only scoring 22 goals in 21 away matches, another narrow 1-0 triumph is a good shout.

You can find the rest of our betting tips and analysis on our Barnsley vs Wigan predictions.