Atlanta Falcons vs Philadelphia Eagles Picks, Predictions and Betting Tips for the Sunday Night Football showdown at Mercedes-Benz Stadium. Will the Falcons pick up their first win of the season? Or will the Eagles’ offense be too much for Atlanta to handle? Read on for all of our free NFL tips, picks, and predictions! 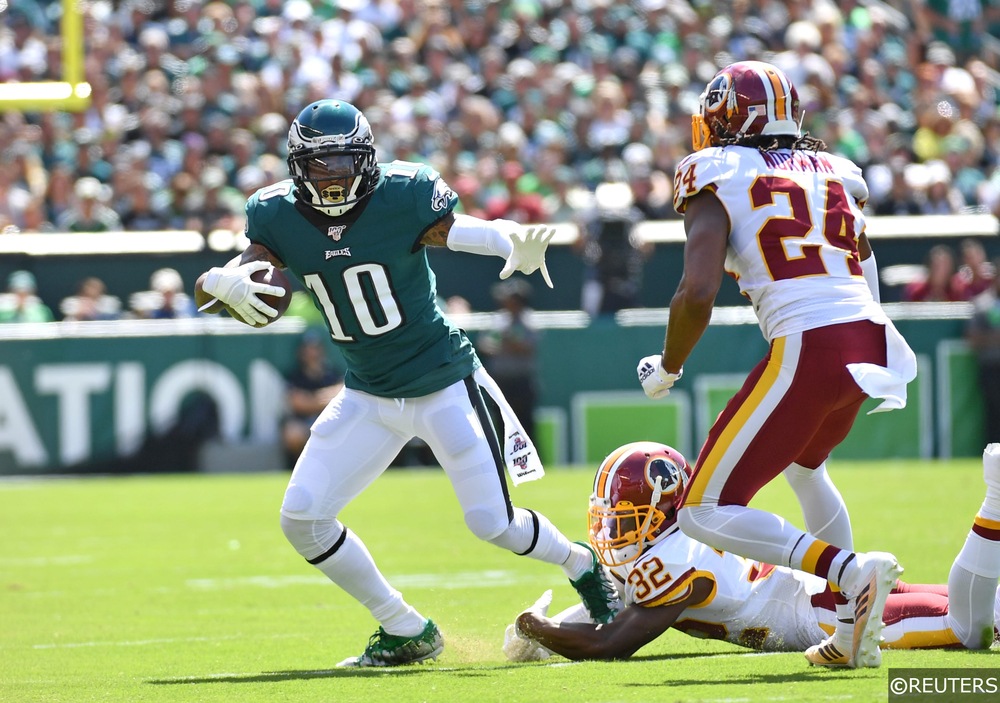 This week’s edition of Sunday Night Football involves the Philadelphia Eagles travelling down to the newly built Mercedes-Benz Stadium to face the Atlanta Falcons. Philly comes into this one off a comeback win against the Redskins, while the Falcons will look to rebound after getting crushed by the Vikings.

The visiting Eagles gave their fans quite the scare last week as they needed all four quarters to take down the lowly Redskins by a score of 32-27. The return of wideout DeSean Jackson helped spark the Philly offense, as Jackson scored two touchdowns of more than 50 yards in his effort to over-extend the Washington. The defense was a little shaky, especially early in the game when their coverage was far below par and led to the Redskins jumping out to a 17-0 lead.

Atlanta had a not so similar story, as they were straight up bullied by the Vikings. Atlanta lost the battle on both sides of the ball and now look to be a shade of the offense that they were when they went to the Super Bowl a couple years ago. The offensive line played horribly and that had a negative effect on QB Matt Ryan, as he struggled mightily when facing pressure. Ryan and the Falcons’ offense will have to be more stable and consistent if they want any shot at competing for an NFC playoff spot.

When we look at this contest, we can’t seem to ignore the value on the Eagles on the moneyline. We projected the Eagles to be 3.5 or 4 point favorites, so anything less than that is icing on the cake for us. Philadelphia is better on both sides of the ball and have a massive advantage when it comes to the offensive side of the ball. Atlanta’s offense isn’t what it used to be, yet public bettors continue to think they will see the Falcons consistently putting up close to 30 points. But this Falcons team has a lot of trouble on the offensive line and that is negatively effecting QB Matt Ryan. The defense already has trouble getting pressure on the quarterback and will have an even tougher time against such a stout Philly O-Line. QB Carson Wentz and his talented offensive core should be able to move the ball fairly easily against a Falcons defense that doesn’t offer much resistance. On the other side, Ryan and the Falcons have been extremely inconsistent and the Eagles have enough playmakers in their front seven to make the difference in this one.

For the same reasons as above, we also like the Eagles over on their team total. Philly’s offense was on fire in the second half of their Week 1 game and it seems like they’ve worked off some beginning rust. Their playmakers will give Atlanta a hard time and Wentz should have all day to throw given the mismatch in the trenches.

DT Ra’Shede Hageman (suspension) is out for this contest.

WR Russell Gage (concussion) and T Matt Gono (back) are both listed as questionable.

QB Nate Sudfeld (wrist) and LB Kmau Grugier-Hill (MCL) are both out indefinitely.

T Jordan Mailata (back) is listed as questionable.