New England Patriots vs New York Giants Picks, Predictions and Betting Tips for this week’s Thursday Night Football contest from Gillette Stadium. Will the Patriots continue their unbeaten run? Or will rookie quarterback Daniel Jones lead the Giants to the biggest upset of the season in Foxborough? Read on for all of our free NFL tips, picks, and predictions! 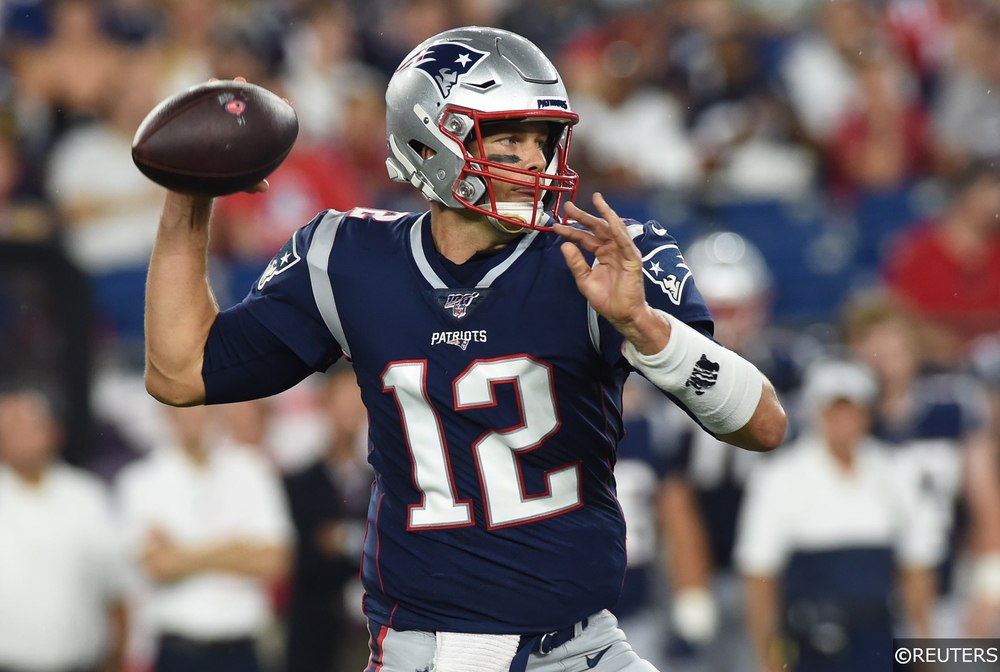 Week 6 kicks off with the 2-3 New York Giants heading up to Massachusetts to face the undefeated and reigning Super Bowl champion New England Patriots. This will be the hardest task yet for Giants’ quarterback Daniel Jones as he faces a Bill Belichick defense that is notoriously suffocating against rookie quarterbacks.

The Giants are looking to bounce back after a tough loss at home to the Vikings this past weekend. The final score was 28-10 in favor of Minnesota but the Vikings felt in control from the second the game kicked off. The Vikings’ offense came alive and took advantage of a depleted Giants’ linebacker group, especially exposing LB Nate Stupar as he finished with an overall 27.4 grade from Pro Football Focus. Without running back Saquon Barkley, the Giants failed to get anything going on the ground, managing just 78 yards on 20 carries (3.9 yards per carry). Rookie QB Daniel Jones contributed a beautiful touchdown throw to wideout Darius Slayton but missed multiple open receivers and had a couple recorded turnover-worthy throws by Pro Football Focus. It’s obvious to note that for New York to have a chance at an upset this week, their defense will need to have their best outing of the season. New York’s defensive unit has the 4th lowest grade in the league by Pro Football Focus, along with the 4th lowest graded pass rush and the 2nd lowest graded coverage group in the league.

This past weekend was a lot less stressful for the Patriots as they dismantled the Redskins by a score of 33-7. The first half was a bit shaky for the reigning champs as they took just a 9-7 lead into the locker-room, but the offense exploded in the second half to put the game away. It was another good performance for QB Tom Brady, but he did have a couple of missed throws and a very uncharacteristic interception at the end of the first half. Otherwise, WR Julian Edelman carved up the Redskins’ defense for 110 yards and a touchdown on 8 receptions. On the other side of the ball, the Patriots continued to impress by holding opposing QB Colt McCoy to just 119 yards through the air. They did give up a shocking 65-yard touchdown run to wideout Steven Sims Jr., but that was all the Redskins could manufacture all day.

After looking at this matchup, we think the best bet for this contest is the Patriots on the point spread and the alternate point spread for some better value. Almost every single match-up on both sides of the ball sides with New England and because of that we find it hard to see how the Giants keep this one close. The Patriots offense will have an easy time moving the ball at home against a Giants’ defense that is 20th in defensive efficiency while also boasting some of the lowest PFF grades for overall defense, pass rush, and coverage. The lack of an effective pass rush will give the Patriots all the time in the world to pick apart a Giants’ secondary that has been nothing short of disastrous.

On the other side of the ball the Patriots have the best defense in the league, as the unit ranks 1st in pass defense DVOA and 2nd in run defense DVOA. Although Daniel Jones has had some success for the Giants, his offensive line hasn’t given him much help. Jones has been pressured on 44% of his dropbacks in the past three weeks, which is the highest mark for a quarterback over that time span. Pats’ Head Coach Bill Belichick will make it extremely tough for Jones to move the ball on his defense as he has an incredible record of shutting down opposing rookie QBs. Jones also visited the Patriots prior to the NFL draft, so Belichick and the Patriots’ scout team has plenty of information on the rook.

We feel very comfortable putting our confidence on the team that has better coaching on a short week, home field advantage, and an advantage at practically every matchup on both sides of the ball. Even if the Giants can put together a couple of good drives, it’ll be hard to find the endzone against a Patriots’ unit that ranks #1 in redzone defense as they only allow 25% of opponents’ redzone trips to result in touchdowns. This will be a turnover-filled wake-up call for rookie QB Daniel Jones and the Giants’ offense.

RB Saquon Barkley (ankle) and WR Sterling Shepard (concussion) are both listed as doubtful and are unlikely to play.