New York Jets vs Cleveland Browns Picks, Predictions and Betting Tips for this week’s edition of Monday Night Football at MetLife Stadium. Will the Browns recover from their blowout loss last week? Or will the Jets get enough out of QB Sam Darnold to pick up their first win of the season? Read on for all of our free NFL picks, tips, and predictions! 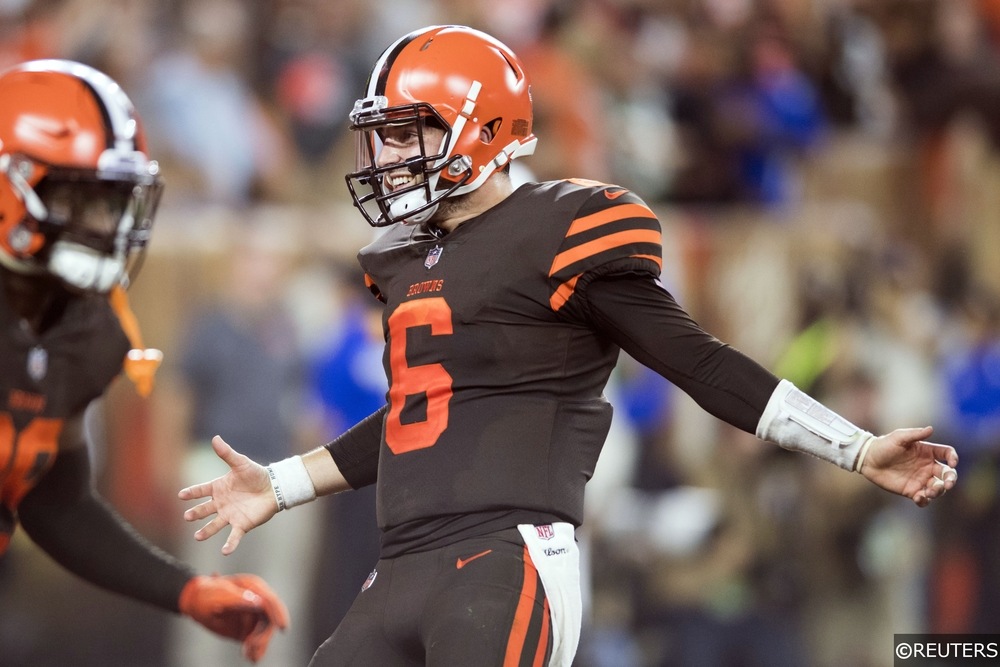 What happened to the hype around the Cleveland Browns? After getting blown out in their home opener, the 0-1 Browns now head to the east coast to face the 0-1 New York Jets. Although its only Week 2, both teams really need a win to help live up to all of their preseason hype.

The season couldn’t have really started worse for the Browns. The offensive line played horrible, the team as a whole committed 18 penalties, and QB Baker Mayfield had the wheels fall off in the fourth quarter as he ended the game with 3 interceptions. It’s still going to be a learning process for the new-look Browns, but getting blown out in your home opener definitely doesn’t supply many good notes to build on.

The Jets had arguably a more heartbreaking loss as they couldn’t stop the late Buffalo Bills comeback. QB Sam Darnold didn’t look great as he missed a couple of easy throws and was mostly afraid to stretch the defense down the field. RB Le’Veon Bell had a great outing, but it wasn’t enough to help a Jets offense that only put up 16 points. The defense was great at times, but also had some lapses in the second half that have room for the Bills’ comeback.

When we look at this contest, two things point out immediately. First, we think the public is greatly overreacting to just one performance from both sides. In terms of the spread, we think Cleveland is the right side to take given that you can get them at under a field goal. The Browns had a really rough start so everyone is going to get off of the bandwagon now, but it seems like this is a good time to buy in on Cleveland for their Monday night showdown. Cleveland has more than enough talent to exploit a fragile Jets’ defense and their pass rush should also cause problems for Jets’ QB Sam Darnold. The Browns are better on both sides of the ball and should bounce back after an embarrassing Week 1 loss.

In terms of the total, we like the over here because we think people are overreacting to last week’s performances. The Browns’ offense struggled mightily against a solid Titans’ defense, but now they have the chance to go up against a Jets’ defense that has been inconsistent rushing the passer and is dealing with injury problems to two of their top players. Cleveland will come out more aggressive and try to take advantage of the weaknesses in the Jets’ secondary and we think they will be successful enough to contribute to the total. On the flip, the Browns’ defense hasn’t looked great and is extremely young, which leaves it prone to inconsistency. Their run defense is going to struggle to contain Le’Veon Bell and this should open up the play-action passing game for Darnold. Given the Browns’ struggles in both run defense and preventing big plays, we think the Jets will be able to do enough to contribute to this total going over the number.

QB Baker Mayfield injured his hand last game but is listed as probable.