San Francisco 49ers vs Seattle Seahawks Picks, Predictions and Betting Tips for the Monday Night Football showdown from Levi’s Stadium. Will the Seahawks pull off the huge road upset? Or will the 49ers perfect season continue? Read on for all of our free NFL tips, picks, and predictions! 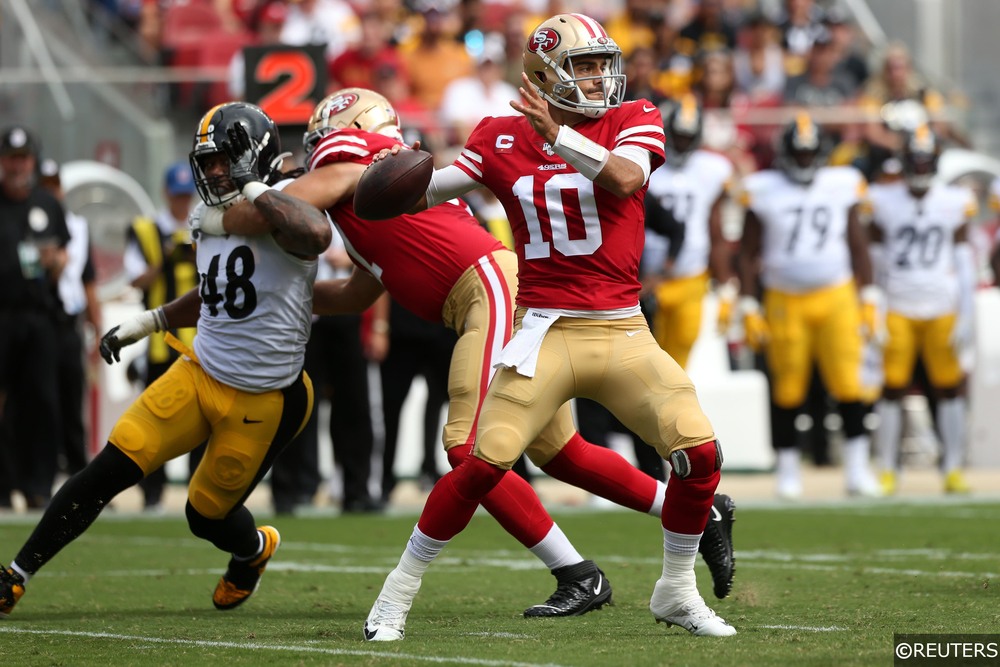 We have a storied NFC West rivalry taking center stage on this week’s edition of Monday Night Football when the 7-2 Seattle Seahawks head down to San Francisco to face off with the 8-0 49ers. This is set to be the biggest game of the season thus far as the winner of this one will get a huge tiebreaker advantage in the division title race.

Seattle is coming off an 40-34 overtime win over the Buccaneers in which MVP-candidate QB Russell Wilson tossed for over 370 yards and 5 TDs. The backfield also added well over 100 yards rushing but this one was all about Wilson’s ability to make plays all over the field. The only downside was the Seattle secondary as they got torched all evening long by Mike Evans and the Tampa Bay offense.

The undefeated 49ers have had some time off since their last game on Thursday Night Football. They were in total control of that one as the defeated the Arizona Cardinals by a score of 28-25 but it was a little bit of a concerning effort from the defense. They struggled to stop the run for most of the game and shockingly gave up a couple of big plays due to coverage mistakes and poor tackling. QB Jimmy Garoppolo was able to lead the offense with 317 yards and 4 TDs, with many of them being very impressive throws on 3rd downs to keep drives alive.

After analyzing this matchup, we have to side with the 49ers to win on the double result with full confidence. The 49ers are a far more complete team and will be able to dominate this game in the trenches. Seattle’s pass defense has been horrible this year and if you add in their injury concerns at cornerback, its easy to see the San Francisco attack having plenty of success here. On the other side of the ball, their incredible pass rush and coverage unit should be able to get a few stops on the Seattle offense and possibly force a turnover or two. We think the Niners’ ability to compete on both sides of the ball will allow them to come out hot at home and take the lead into halftime and hold on until the final whistle.

In terms of the total, we like the over on the points total due to the abilities of both of these offenses to generate explosive plays. Seattle has the top-rated DVOA pass offense and the highest-graded QB in Wilson, so they should find success even against this elite San Francisco defense. On the other side, the Niners won’t have much resistance from a travelling Seahawks’ defense that has a lot of issues and injuries in the secondary right now.