A World Cup victory in 2014 should have sent Germany into the Euro 2016 qualifiers brimming with hope and confidence, but they put in a shaky display in the opening match against Scotland.

They managed to get a victory eventually, but they followed it up with a 2-0 loss in Warsaw against Poland, and then could only manage a 1-1 draw at home to the Republic of Ireland.

They have won the following three of their Euro 2016 qualifiers, but two games against Gibraltar and one against Georgia can hardly be considered tough matches for the World Cup winners.

In between these qualification matches they have played a number of friendlies, including a 2-2 draw with Australia and a loss at home to the United States.

This could certainly be cause for concern for the German public, as they still have tough away games against Scotland and Republic of Ireland to play in their remaining 3 matches after this game.

Poland are revelling in it at the moment. They lead Group D at the moment and hold a two point advantage over 2nd placed Germany.

They remain unbeaten after six matches, with their only blips being draws against Scotland and Republic of Ireland.

This, along with a few friendlies, means that Poland are unbeaten in ten matches, with their last loss coming in a friendly against Scotland back in the spring of 2014.

It seems that Poland have found a pretty nice balance between attack and defence. They have kept four clean sheets in their six games so far, and scored at least two goals in all but one of their matches.

The odds are looking pretty tasty too. The bookies are heavily favouring the Germans, with odds of 2/7 for a home win vastly underestimating Poland in my opinion.

Poland have an excellent chance of getting a result against a faltering German side on Friday. They kept a clean sheet in Krakow and will probably set up aiming to maintain their two point advantage by getting a draw. Odds of 11/4 for a Poland Win or Draw Double Chance look exceptionally good value. I think they could even manage a narrow 2-1 victory, and odds of 33/1 are certainly profitable. 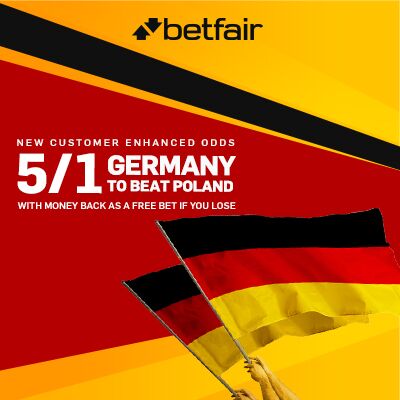