8/1 Scotland or Poland + £100 in free bets for new Betfair customers who sign up today!

The previous game between Poland and Scotland was something of a classic ending up as a 2-2 draw. Group D has been one of the more intriguing Euro 2016 qualifying groups with Germany, Poland and Republic of Ireland battling for the top two spots, while fourth place Scotland still have an outside chance.

A September 4th away defeat to Georgia may have cost Scotland a return to the European Championships. Away draws against Poland and Republic of Ireland, a win at home against Rep of Ireland all appeared to have set Scotland up well. However, they were unable to break Georgia down and manager Gordon Strachan was doubly disappointed after they finished a spirited first half tied at 2-2, but conceded one more time in the second half.

Thursday night’s game against Poland is now officially a must win. It won’t be an easy one against a Polish side that has once again impressed in qualifying. Their lone defeat came earlier this month away against Germany. They haven’t been quite as strong away from home, they were generally blunted by Republic of Ireland. Still, they’ll come into the game against Scotland knowing that they still have a chance in their pursuit of Germany for the group lead.

Scotland’s performance against Germany was pretty impressive. They may have lost 3-2, but it was a good performance where the Scots went toe-to-toe with one of the world’s strongest teams. We believe they’ll find a way to bring their best game here.

2. Poland away from home

We’re not convinced that Poland are the same side away from home. Most of their best performances have come on their own soil, and they have been impressive, but travelling to Scotland won’t be an easy trip.

We think that both teams will play with a degree of freedom. Both sides need a win and there’ll be an urgency to this game. Look for some goals to be scored an an entertaining game. 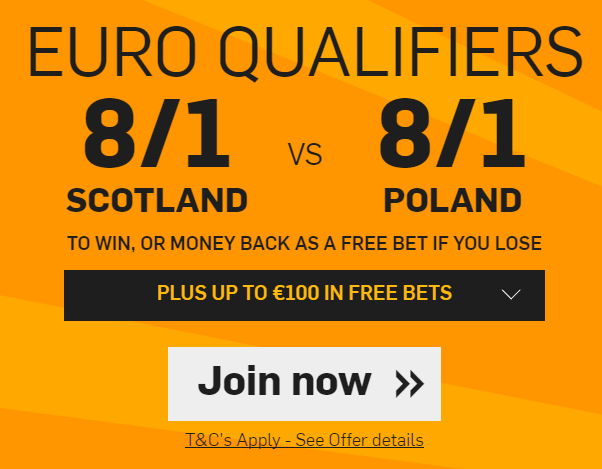