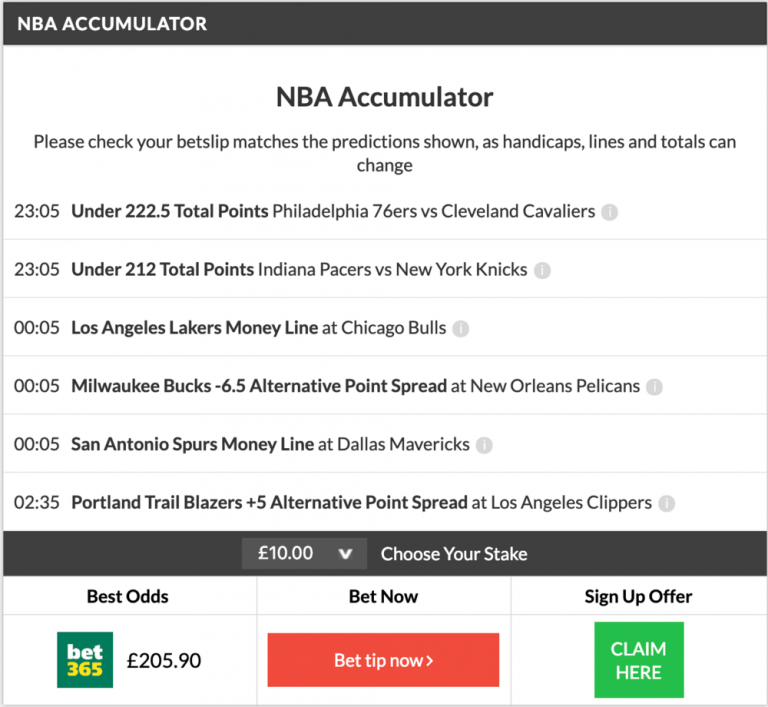 Huge day at FST yesterday! After landing our 20/1 Win Accumulator earlier in the day, our basketball analysts delivered yet another winner overnight!

We landed a 19/1 NBA Accumulator plus double to cap off Tuesday!

The Acca tipped off in Philadelphia where the 76ers hosted the struggling Cavaliers. We opted for a low scoring game in this one and the tip came in without any real issues. Philadelphia held Cleveland to under 100 pts and won 106-99 in the end to land our Under 222.5 Total Points tip with ease.

Another relatively low scoring game happened in the 2nd tip of our Acca. Indiana beat the New York Knicks 103-98 and we had Under 212 Total Points in this one. All five starters scored in double figures for Indy which recorded it’s 26th home victory of the season.

LeBron James had a huge night with 36 points as his Los Angeles Lakers beat the Chicago Bulls 123-107. Although their playoff hopes at this point of the season are fairly slim, the Lakers put on a show after being down as much as 20 points in this one and won their 13th game on the road this season.

The Milwaukee Bucks blew out the New Orleans Pelicans 130-113 and landed our -6.5 Point Spread tip with ease. Giannis Antetokounmpo led the way with 24 points for the East leading Bucks in this one.

The San Antonio Spurs beat the Dallas Mavericks 112-105 in the next game on our Acca. Derozan scored 33 and Aldridge contributed with 28 for the Spurs who are hanging on to the 7th seed in the Western Conference!

And finally the Portland Trail Blazers routed the LA Clippers by 21 points in the final game of the Acca. A huge night by McCollum who scored 35 points was the key for the Blazers as we backed +5 Alternative Point Spread in this one.

As always we encourage you to follow our FREE NBA TIPS page for even more winners! Tips go up on the website in the afternoon hours!

Nice to wake up to cheers pic.twitter.com/m82FfNZP4e