CLICK HERE to get 6/1 on Man UTD to win plus free bets!

It started badly for the hosts at Old Trafford. Michael Carrick saw a cruel deflection put an own goal on his record, but from then on it was all Manchester United.

They dominated possession and looked a real threat on Brugge’s goal, turning on the style for the first time this season. Memphis Depay got his first competitive Man United goal 5 minutes after Carrick’s opener, and then added another just before half time. Marouane Fellaini’s injury time goal put the icing on the cake and made a difficult job almost impossible for the Belgians.

They couldn’t follow this up in the Premier League though, paying out a goalless draw with Newcastle at the same ground.

Club Brugge followed their loss to Manchester United up with another loss in the Belgian Pro League. This makes it just 2 wins in Club Brugge’s last 5 matches in all competitions.

Overall, they have been disappointing in the Pro League this season. They have picked up just 7 points from their opening 5 league matches, leaving them in a disappointing 6th position.

It will be interesting to see how Manchester United set up on Wednesday. They could simply sit back and defend their lead, or they could try to take advantage of Club Brugge’s inevitable attacking lineup and extend their lead.

Either way, I think there will be a fair number of goals flying in in this match, as Manchester United’s defence can look a bit shaky at times and Brugge will be opening themselves up for counter attacks.

Odds of 4/5 for Over 2.5 Goals look like they offer a good amount of value as well, especially considering the 4 goals last week and Manchester United’s impressive, if unfruitful, attacking play against Newcastle. 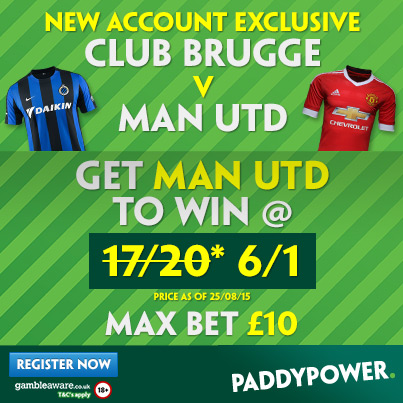