Crystal Palace’s impressive 2-1 win at Anfield before the international break was a welcome break from their recent poor run of results.

They had lost three of their previous four games, with the other being a draw. They shipped nine goals during this period and only managed to reply at the other end twice.

This was a far cry from their good looking start to the season, and it saw Crystal Palace begin to slide down the Premier League table.

They currently sit in 10th position in the league with a game in hand over 16 of the 20 Premier League teams. A win on Monday would see them move up to at least 7th, with the possibility of leapfrogging Tottenham Hotspur and West Ham into 5th as well depending on the outcome of their game on Sunday.

Sunderland are consigned to at least one more week in the relegation zone. They are in 19th position with just six points from their opening 12 games, and safety is four points away.

These six points have come from a win over arch rivals Newcastle and draws against Swansea, West Ham, and Aston Villa. All of their other seven games have ended in defeat.

It’s not looking good for Sunderland, and the appointment of Sam Allardyce hasn’t allayed many fans’ fears after their 6-2 thrashing by Everton.

Sunderland have only won one of their last six matches against Crystal Palace as well, with Palace taking the points on three occasions and two goalless draws being played out.

It’s really not looking good for Sunderland, and their away record paints an even bleaker picture. They have picked up one point from a possible 18 on the road, scoring six goals and conceding a huge 18.

Sunderland have lost five of their seven away games by more than one goal, so I think odds of 1.975 for a Crystal Palace -1 Asian Handicap Win are excellent value for money. I’m also going for a 3-1 correct score prediction at 14/1.

Read more about Asian Handicap betting with our free guide! 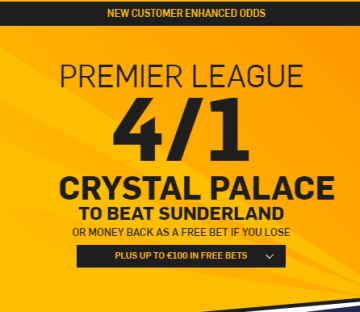