Spurs to win – 4/1! Click to claim this special offer now!

Spurs began their season with a relatively standard 1-0 loss away to Manchester United, but their three draws in a row that followed were disappointing for Mauricio Pocchettino’s men.

They let a two goal lead slip at home to Stoke before drawing against Leicester and then again against Everton.

Last season’s phenomenon Harry Kane is yet to score for Spurs this season, and it took a late Ryan Mason goal last weekend for Spurs to beat the out of form Sunderland.

They did manage to get a 3-1 win over Qarabag in the Europa League in midweek though, with new signing Heung-Min Son getting his first and second goals for his new club.

The good news for Spurs is that they are expecting Christian Eriksen to be fully fit again for Crystal Palace’s visit. The Danish playmaker is an integral part of the lineup, and without him they have seemed devoid of any sort of creativity in the final third.

Moussa Dembele and Clinton N’Jie are both likely to miss out through injury though, whilst Crystal Palace will have to do without Marouane Chamakh, Joel Ward, and Kwesi Appiah.

Palace have been missing these players all season, but it doesn’t seem to have affected them too much, as the visitors are in fine form under Alan Pardew’s tutelage.

They put in a really good showing against Manchester City last weekend, and even looked like winning at one point. Unfortunately, a 90th minute goal from Kelechi Iheanacho resigned them to a 1-0 defeat.

Despite this, they will be very happy with their efforts so far this season. They began by beating Norwich City before losing to Arsenal. They then went on to beat Aston Villa, progressed in the Capital One Cup against Shrewsbury, and then defeat Chelsea at Stamford Bridge.

Palace actually managed to take points of Spurs in both of their meetings last season in the Premier League, and we expect them to do the same again on Sunday. Odds of 5/6 for a Crystal Palace Win or Draw Double Chance look like excellent value as well, and I’m going for a 1-1 draw at 6/1 as well. 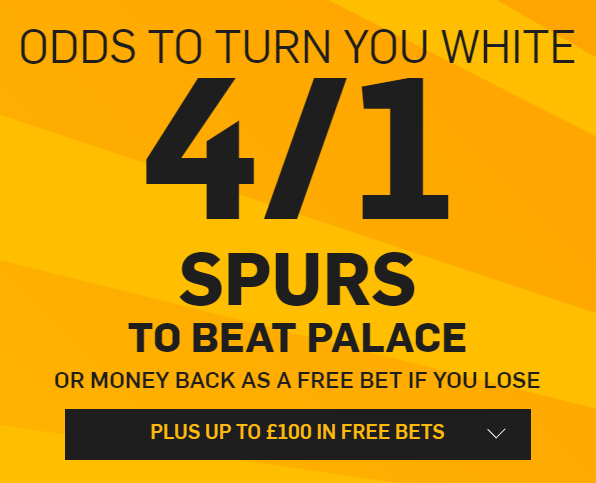