Tottenham Hotspur could be forgiven for losing their opening day fixture against Manchester United, but they really should have won at least one of their following 2 matches.

They first let a 2 goal lead slip against Stoke at home to only come away with a point, a draw which Mauricio Pocchettino said felt more like a loss. Then they struggled to another draw against the in form Leicester City.

Everton also had a rough beginning to their campaign with a somewhat fortunate 2-2 draw against the newly promoted Watford.

But, unlike Spurs, they bounced back and secured an impressive 3-0 victory away against a disappointing Southampton. Although they did lose last week against Manchester City.

Everton have had a midweek fixture in the Capital One Cup though, with Barnsley taking them to extra time in a 5-3 victory for the Merseyside team in what was a high scoring 2nd round of the cup.

They played an almost full strength squad in this match too, so there could be a few tired legs in the Everton camp on Saturday.

Everton haven’t had the best of times against Tottenham Hotspur in recent years. The last time they won against Spurs was back in 2012, and Spurs have won 3 of the following 5 matches.

Christian Eriksen is hoping to be back to full fitness for this game after missing last week, but Andros Townsend is still doubtful. Everton have a few more casualties, with Steven Pienaar, Darron Gibson, Tony Hibbert and, most importantly, Leighton Baines all seeing the physio.

With the tired legs of Everton on show and the somewhat dodgy defensive showings that both teams have put in this season, we would expect a few goals to be scored on Saturday evening. Odds of 4//5 for Over 2.5 Match Goals look like fair odds. We think it could be a draw as well, with odds of 14/1 for a 2-2 draw looking like excellent value. 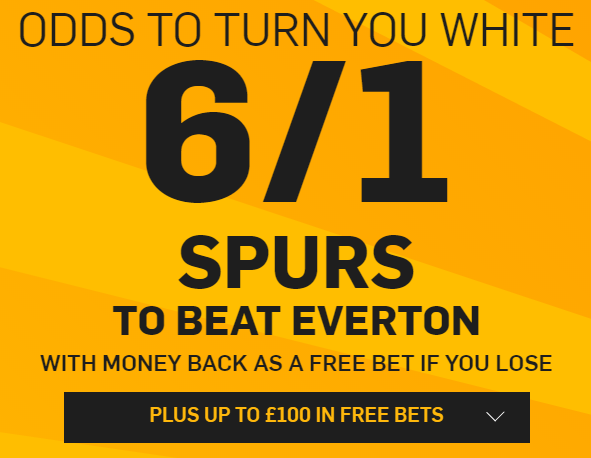