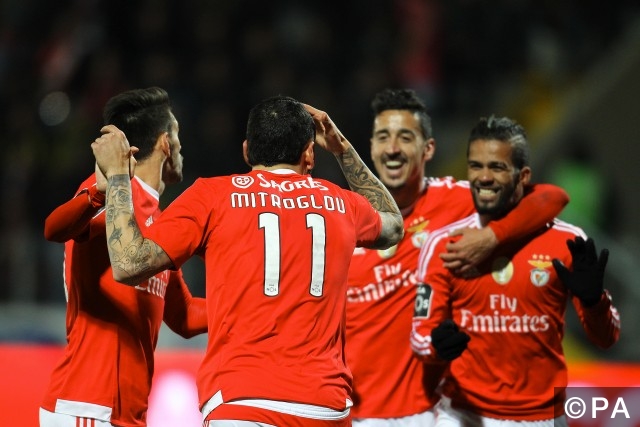 After a spectacular ending to February with a 30/1 Match Goals Acca winner, our tipsters have gotten off to a solid start in March as well by landing a 10/1 Evening Accumulator last night!

if on & SEND IN YOUR SLIPS! pic.twitter.com/0tmwi72baG

It was a busy day on Saturday and our Accumulator consisted of five games total, with three of them being played in the French Ligue 1 and one tip being from both the Eredivisie and the Portuguese Primeira Liga!

The acca got off to a flyer with PSV beating Roda JC at home with a convincing 4:0 margin. The visitors had no chance as PSV scored twice in each half to stay close to the duo of Feyenoord & Ajax who occupy 1st and 2nd place respectively.

After landing our 1st tip in the Eredivisie, three French Ligue 1 games all kicked off at the same time at 7 pm. Cane & Angers got the job done fairly quickly as our BTTS tip landed in the 11th minute when the home team leveled the score after going down 1:0 earlier.

Nice also defeated Dijon in a hard fought game. It took the visitors 69 minutes to score the first and only goal of the match when Wylan Cyprien found the net after a beautiful build up.
Things weren’t looking good in our 3rd tip between Montpellier & Guingamp as we went for Both Teams To Score. After a long and boring first half, the home team finally broke the deadlock in the 50th minute when Steve Mounie scored on a lucky deflection.

After the opening goal was scored the game finally became watchable and the visitors pilled up the pressure in search of a equalizer. And luckily for us, they were able to find their way to the net deep into the 2nd half as Jimmy Briand converted just inside the box!

Off we were to Portugal for the final leg of our 5-fold. It was league leaders Benfica who were away from home against 13th placed Feirense. After 2nd placed Porto won earlier in the day, the pressure was on Benfica to retain 1st place with a win in this one.

It was far from easy, but Rui Vitória’s men got the job done after they took the lead in the 42nd minute through striker Pizzi. No more goals were scored which meant our 5th and final tip came in on the Acca!

Free Football Tips
We post our daily Football Predictions on our website, so make sure to bookmark our Football Tips page so you don’t miss them!

Followers Bet Slips
Here are some of the winning betslips sent in by our followers on twitter:

@FootySuperTips minor adjustment, and cashed out at the end. Cheers! pic.twitter.com/wTWgscKuZj

@FootySuperTips Benfica was a lil shaky so i cashed out pic.twitter.com/6rzzsBxzIO

We also encourage you to send in your winner, simply follow us on twitter and enjoy the ride!