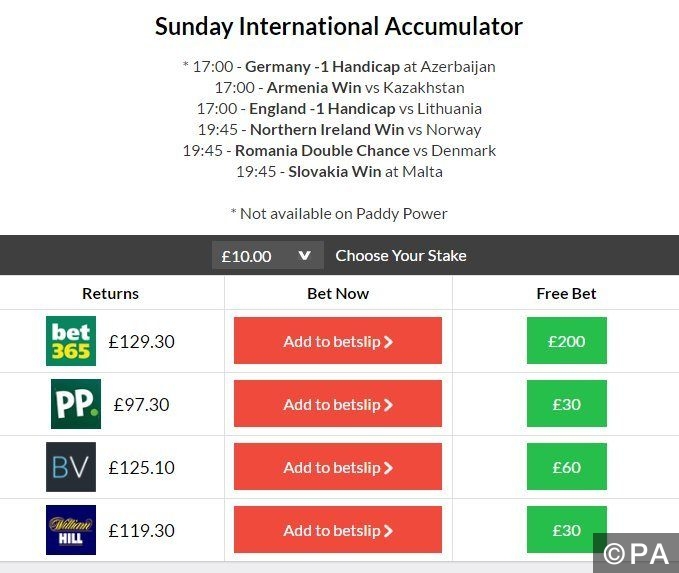 Our tipsters hot form continues with yet another accumulator win.  12/1 International accumulator lands to make it 6 winners in 8 days! What an incredible week for the lads at FST. The other winners were as follows:

LIKE if you were on & SEND IN YOUR SLIPS!https://t.co/1EcgzUAL1b pic.twitter.com/kYUjKURhlj

Tonight’s Acca started in Azerbaijan where Germany looked to continue their incredible run of form. As expected Germany came flying out of the blocks and went 1-0 up inside 20 minutes with a goal from Andre Schuerrle! The home side didn’t take long to respond with an equalising goal 10 minutes later. This clearly didn’t bother the Germans as they soon re-took the lead just 4 minutes later with a goal from Mueller. The visiting side then put the nail in the coffin with goals from Gomez and Schuerrle to get our acca off to a flying start.

Next up we move to Armenia where Kazakhstan looked to cause an upset and get their first win in over 7 games. Not much separated the sides for the first 60 minutes but then a red card for the visiting team soon let Armenia in the door. Just 10 minutes later and they were 1-0 up. Armenia weren’t done there! Just 2 minutes later they managed to make it 2-0 and secure the second leg of the acca.

Third leg of the acca heads to Wembley where England take on Lithuania. Our tipsters were extremely a confident in an easy England win today tipping -1 Handicap! Just 22 minutes in, Jermain Defoe managed to put England 1-0 up and put us a step closer to winning our acca. 15 minutes in to the second half, Southgate brought on some fresh legs with Vardy & Rashford and what a great call that was! Just 6 minutes later, super sub Jamie Vardy managed score a cracking goal and put the home side 2-0 up. Third leg of the acca in!

Romania next and we were expecting the home side to get at least a draw out of this game. Both teams created some fantastic chances but neither could seem to capitalise. 90 minutes later and the game was still 0-0. Fairly boring game in general but a cracking result for our acca and the tipsters!

Last up we head to Malta. Our tipsters put their faith in a Slovakia and what a great call it was. Just 2 minutes in the and the visitors went 1-0 up with a goal from Vladimir Weiss. The acca was now in touching distance but Malta had other ideas. Just 12 minutes after conceding, they managed to make it 1-1 with a goal from Jean Paul Farrugia! 4 minutes before half time and Slovakia take the lead back with a goal from Jan Gregus to get the acca back on track. Unfortunately for Malta, goal scorer Jean Paul saw his 2nd yellow card of the evening and ruined any chance of a Malta come back. It didn’t take long for Slovakia to take advantage of the situation, a goal from Adam Nemec in the 84th minute to make it 3-1 and to give our tipsters their 6th acca win in 8 days!