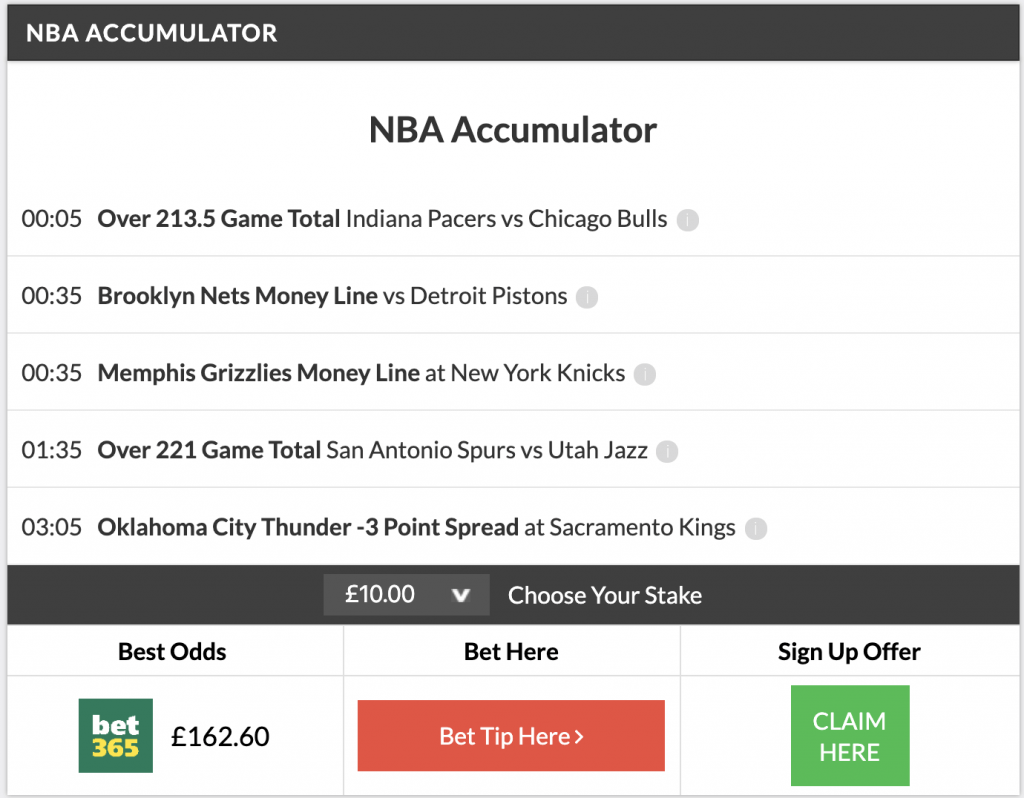 Our NBA tipster has brought us yet another winner!

Last night’s 5-fold landed at around 15/1! That wasn’t the only winner in the NBA last night, as our Double came in as well.

What a way to start Thursday!! 😎

The Indiana Pacers finally got back Victor Oladipo, who has been out since last season with an injury. He scored a 3-pointer which sent their game against the Bulls into Overtime. Indiana won the game in the end, but more importantly the first tip (Over 213.5 pts) of our Acca came in!

Kyrie Irving scored 20 pts as he led the Brooklyn Nets to a home win against the Detroit Pistons. The Nets now lead the season series 2-1, while Detroit suffered a fourth loss in a row.

The Memphis Grizzlies improved to 24-24 after a win against the New York Knicks at Madison Square Garden. The game was only really close in the first quarter which finished 32-32, but after that it was all Memphis who had 7 players score in double figures in the win.

We backed Over 221 pts in the Spur vs Jazz game and it came in with ease. Demar Derozan scored 38 pts and five other players scored 10 or more in the win for the Spurs who are now 21-26 on the season.

And finally, despite only getting 9 pts from Chris Paul, the OKC Thunder dominated the Sacramento Kings by 20 pts, which landed our -3 Point Spread with ease and the Acca was in the bag!

The NBA regular season is around it’s halfway mark, so feel free to bookmark our FREE NBA Tips page for even more winning accumulators!