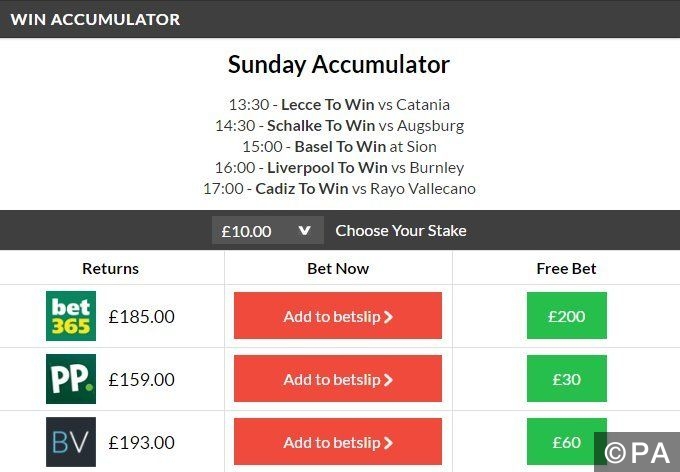 What a weekend it has been for us here at FST! After landing a 22/1 NHL Accumulator on Saturday night and a 110/1 Outright Tip on Golf, it was time to land a Footy bet and our tipsters did just that!

We kicked things off in Italy where two former Serie A teams clashed as Lecce hosted Catania. It wasn’t a beauty to watch, but in the end Lecce got the job done with a 1:0 win which pushed them to the top of the table where they are 2 pts clear of Foggia who have a game in hand.

After the Lecce win, we were off to Germany where Schalke hosted Augsburg. The Blues didn’t have any problems dealing with 13th placed Augsburg as they scored 3 in the first half en route to a convincing 3:0 win to land our 2nd tip of the Acca.

Basel and Sion was the 3rd game in our Acca… our tipsters went with an away win in this one, which was a logical move as Basel are currently dominating the Swiss league and are 17 points clear at the top of the table. It was tougher than expected, but a 55th minute goal from Michael Lang game Basel their 4th win in their last 5 games.

The 4th game on the Acca was arguably the most high profiled one as Liverpool hosted Burnley and grabbed what was a much needed win. After falling behind early on, Klopp’s men levelled the scored just at the brink of half time through Wijnaldum. They didn’t stop there as they continued to push forward as soon as the 2nd half kicked off and it paid off as Emre Can scored the winning goal in the 61st minute for the Reds. Liverpool’s 2nd win in a row has seen them solidify 4th place, although Arsenal do have 2 games less played than them.

4 of 5 games were in on the acca and we were in for a tense afternoon as Cadiz were up against Rayo Vallecano in La Liga 2. Despite the visitors being 21st on the table, it was far from easy for the hosts who are battling for promotion this season. In what was an evenly contested match, Cadiz finally found the breakthrough in the 36th minute through Álvaro Garcia and it proved to be the winning goal for the hosts who leapfrogged Real Oviedo and Tenerife to re-claim 3rd spot on the table.

The winning acca capped off a superb weekend for us, in which we landed three accumulators + a massive golf winner!

Free Football Tips
We have daily football tips and they go up on the website at night around 10 pm each day. They’re posted on the Football Tips page, so please make sure to bookmark the page in order to get on the tips as soon as they’re posted!

Followers Bet Slips
Here are some of our followers’ betslips which were sent to us through twitter after the Accumulator came in:

@FootySuperTips Cheers guys. Was only meant to put £4.50 on it but a slip of the finger did £14.50! Happy mistake now! BOOOOOMMMMMM!!! pic.twitter.com/z1vjkWM9UY

@FootySuperTips only on for £5 but il take it! Cheers lads pic.twitter.com/R1AlT7RYak

@FootySuperTips cashed this earlier at £116 should have held on for it. pic.twitter.com/q3PLfqZOWc