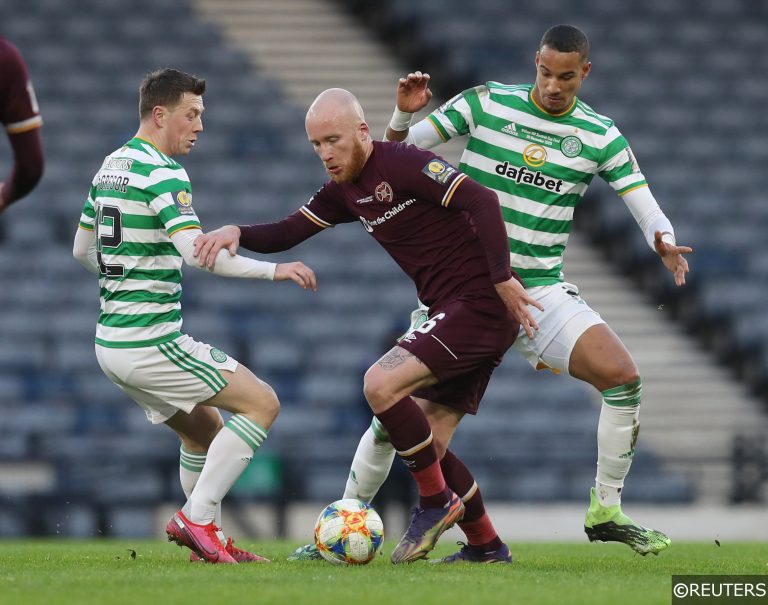 Celtic take on FK Jablonec of the Czech Republic at Parkhead on Thursday night and they are well placed to reach the play-off round of Europa League qualifying after a 4-2 win in the first leg.

We’ve put together a 34/1 bet builder ahead of the action as the Bhoys bid to reach the tournament proper.

Celtic’s win at the Stadion Strelnice was the first victory under new boss Ange Postecoglou and they then backed that up with a 6-0 demolition of Dundee in the Premiership.

It appears as if the Glasgow giants are starting to click into gear under the guidance of the Australian after a difficult start, and we feel they can claim a win with room to spare against a Jablonec outfit in disarray.

Jablonec are winless in their last three games (L2, D1) and could be entering a difficult period after the team’s owner was forced to apologise for boss Petr Rada’s behaviour following a draw at Bohemians of Prague over the weekend.

Celtic were ahead at the break in the first leg and had built up a 2-0 lead by half-time. in their thrashing of Dundee at.  Even when the Hoops were struggling for results they were still strong starters and have been leading at the interval in three of their five games this season, while they have been the team to open the scoring in four of their matches.

New recruit Kyogo Furuhashi has made an immediate impact in Glasgow with four goals in three appearances, two starts, and at a big price we feel he is worth taking on to score two or more goals on Thursday.

The 26-year-old forward had an impressive scoring record in his native Japan prior to making the move to Celtic and scored seven goals in his final five games for Kobe, meaning Furuhashi has now scored 11 goals in his last seven competitive starts.

Celtic may have kept a clean sheet against Dundee but that was their first shut-out of the season and Jablonec boast an impressive attacking record.

The visitors have scored in three of their four games this term, with five goals in total, and have only failed to find the back of the net in two of their last 15 competitive games.

There were only four corners in the first leg of this tie but we think that was the exception rather than the rule for these two teams and the second leg could be a good fixture for overs backers.

Jablonec managed eight corners in their only away game so far this season and across their four games so far have had 27 corners in total, meaning they are averaging 6.75 per-game.

Celtic are averaging 5.6 per-game and we feel over 9.5 in total in this match looks a solid option.