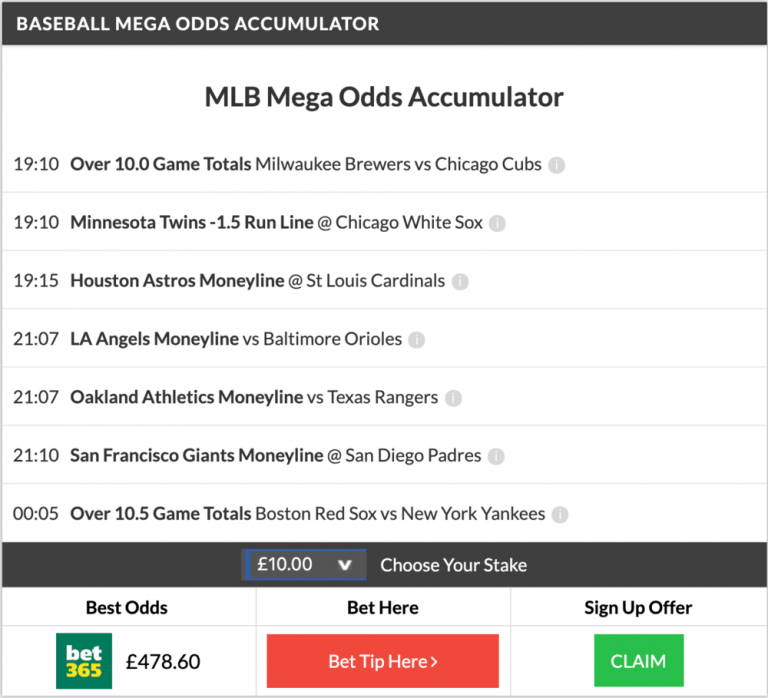 What a great way to end the week here at FST as our baseball analyst delivers yet again!

This time he landed a 47/1 Mega Odds Accumulator which included 7 legs!

WHAT A START TO MONDAY!

The night started off in Milwaukee where the Brewers and Chicago Cubs met and we went for Over 10 runs total in this one. It was a lively start to the game as we saw 10 runs scored by the end of the 5th inning, in the end it finished 11-5 to the Cubs, landing our first prediction of the acca.

Next up we backed the Minnesota Twins -1.5 Run Line vs the White Sox, who beat them the night before. Minnesota got their revenge here and they blew out Chicago 11-1 in a no contest affair.

The Houston Astros beat the St Louis Cardinals 6-2 to land our 3rd game of the Acca. It was their 30th win on the road this season.

It was a tight affair between the Baltimore Orioles and LA Angels. The two teams were tied at 4-4 until the bottom of the 9th, luckily for us the Angels found their breakthrough and scored a run to seal the win 5-4. They claimed their 55th win of the season last night.

The Oakland Athletics needed two runs in the final inning to overturn a 5-4 deficit into a 6:5 win over the Texas Rangers. It was their 2nd win in a row and they are now 6.5 games ahead of their division rivals, the Rangers.

Another tight game was played between National League West rivals as the SF Giants managed to beat the San Diego Padres. After both teams exchanged leads early, it was the Giants who managed to pull ahead in the 6th. They escaped with the win after the 9th inning ended 2-2 for a total of 7-6 in favour of the Giants.

And finally we needed Over 10.5 Total Points in the Yankees vs Red Sox game to land the Acca. Both teams were on fire and it was never in doubt that our prediction would land. The game finished 9-6 in favour of the Yankees which landed our 47/1 Mega Acca!!!

The summer is dedicated to MLB across the pond and our tipsters are taking full advantage! Bookmark our Free Baseball Predictions page so you don’t miss out on any future acca winners!

Here are some betslips that were sent to us by our followers over on twitter:

Get in nice wee start to the week pic.twitter.com/XI2jdg7iiD

Would love Monday’s more if they all started this way! 😀 pic.twitter.com/vg0dWlfC62

Wahoo !! Thanks for this one ! pic.twitter.com/Vq7gfHPvu9