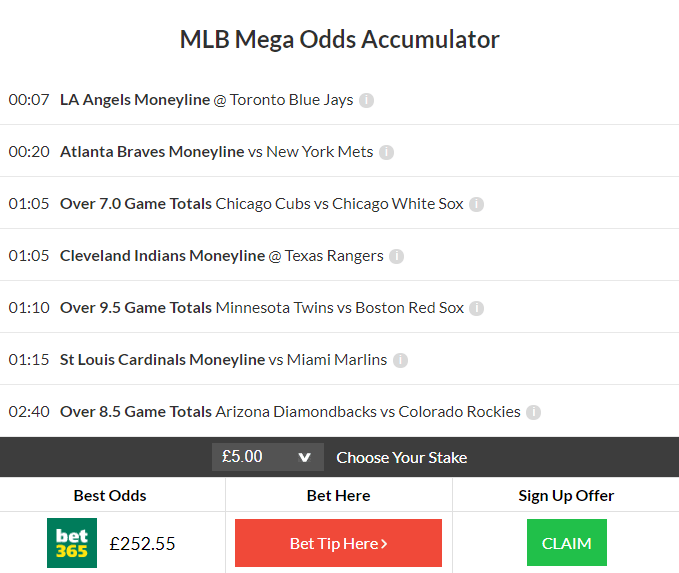 Less than a week after our 11/1 MLB Accumulator + Double winner, our baseball analyst has gone and done it again with another overnight winner!

Our Mega Acca started in Toronto, where the Blue Jays took on the LA Angels. We went for the away team and what a performance it was from Angels slugger Mike Trout. He hit two home runs, including his sixth career grand slam, and had a career-best seven RBI as the Angels beat the Toronto Blue Jays 11-6.

Next up were the Atlanta Braves. They faced the Mets at home and were slow burners as it took until the sixth innings to see them take a comfortable lead. A 7-2 win took the NL East leaders to 14-4 in June, the best tally in the majors.

For our third and fifth legs, runs were the aim. More than eight were needed in the Chicago White Sox @ Chicago Cubs game, while ten were needed in the Boston Red Sox @ Minnesota Twins match. The former got off to a flyer with five runs in the first innings and it took until only the fourth innings to see this land! The latter came just as quick with ten runs scored by the end of the fifth.

There wasn’t much to worry about for our fourth leg over in Texas either as the Cleveland Indians had locked down a dominating lead over the Rangers. Veteran second baseman Jason Kipnis hit two home runs, going back-to-back with Roberto Perez during a five-run first inning, and the Texas Rangers couldn’t recover as they were defeated 10-4… but the same couldn’t be said for the St Louis Cardinals.

We needed St Cardinals to win at home to the Miami Marlins and after nine innings the standings were tied. The tenth brought no relief and it was squeaky bum time as the two teams went into the eleventh innings… with two out in the bottom of the 11th, Paul Goldschmidt sealed the win for the Cardinals with a solo home run – what a way to win it!

Last up we needed more runs in the Colorado Rockies @ Arizona Diamondbacks game. Nine or more to be exact. As the last leg of the accumulator, it was tough to see this get off to a relatively slow start. We were in need of five runs with just one-third of the game left, and it was Ryan McMahon’s two-run double in the seventh that got things going before we saw our 49/1 acca land at the top of the eighth!!!

Boom cheers lads 1 run of the acca too pic.twitter.com/KfwpA3OLPc