52/1 Winning Both Teams to Score Accumulator

Here’s a few of winners who followed our winning tips! Don’t forget to follow us on Twitter and send in your winning bet slips!

@FootySuperTips I think I am in love with you ☺️ pic.twitter.com/30fu6Eqokq

22/1 Winning Both Teams to Score and Win Accumulator

Included in today’s winning accumulator was the weirdest match of the season so far, after going 2-1 up, Real Vallecano picked up 2 quick red cards and ended up succumbing to 9 further Real Madrid goals and end the game 10-2! If you want to follow today’s both teams to score and win accumulator tips just click the link!

Here’s a handful of winners who followed our winning both teams to score & win acca! Don’t forget to follow us on Twitter and send in your winning bet slips! 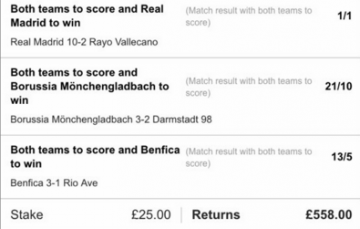 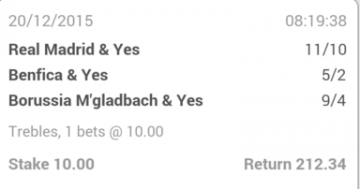 Some followers combined both tips for a huge BOOM!

@FootySuperTips thankyou so so so much…..you guys are amazing. I’ve never won so much in my life 😁😁😈 pic.twitter.com/NGuNBJHsDK

@FootySuperTips i certainly was!!! Not risking it for the bordeaux and marseille BTTS so cashed it!!! pic.twitter.com/hSB0ZVUQHX — Lewis Stockman (@LewisJoe_) December 20, 2015

It is estimated that we took in excess of £1,100,000 (£1.1 million) from the bookies on Sunday from our 2 winning accumulators! An incredible effort from our team of tipsters!

Want to join in the action? Make sure you’re following our Free Football Betting Tips which go live daily at 12pm!

It’s been a fantastic December for everyone who’s followed us!

.@FootySuperTips All FREE TIPS :) Merry Christmas from everyone at FST!!