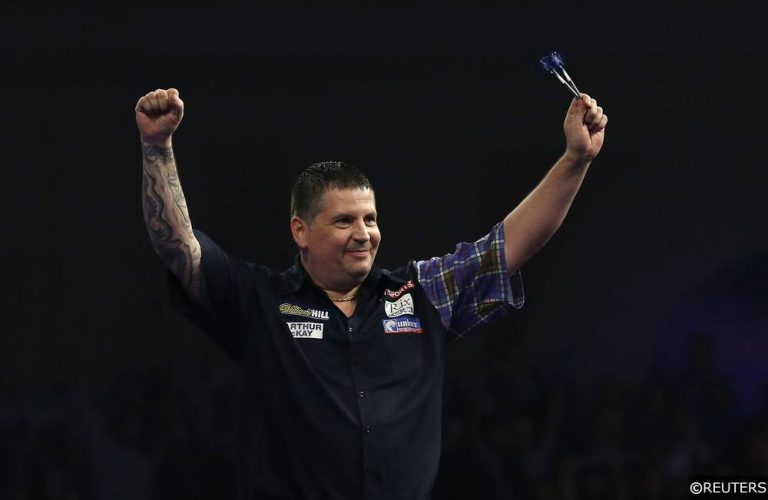 Sunday night was a great night for us here at FST. Not only did we land a 32/1 win accumulator on the football, but both of our outright tips at the World Matchplay made the final to secure more profits. Gary Anderson, advised at 7/1, defeated Mensur Suljovic, selected at 33/1 each-way, in the final of the tournament to continue our excellent run of results.

The tournament got off to a great start for us even before Anderson or Suljovic had thrown a dart, as the odds-on favourite Michael van Gerwen was sensationally knocked-out on the opening night – leaving the tournament wide open. Both Anderson and Suljovic were comfortable in their first-round victories over Stephen Bunting and Steve Beaton respectively, but things weren’t as straight forward in the second round. Suljovic was a relatively easy 11-8 winner over Ian White but Anderson was put under real pressure in his 11-9 win over Raymond van Barneveld.

The tournament really came to life in the quarter-finals, and we witnessed one of the all-time great matches at the Winter Gardens, as Anderson eventually beat Joe Cullen 19-17, hitting a nine-darter in the process. It was a much easier passage to the semi-finals for Suljovic, as he saw off Darren Webster 16-10.

The semi-finals saw Gary Anderson take on giant-killer Jeffrey de Zwaan; Anderson once again prevailed, but had to produce a 106 average to see off his Dutch rival. Meanwhile Suljovic wasn’t particularly fancied as he played Peter Wright for the other place in the final. However, Wright never really showed up, and Suljovic went through 17-13, and landed the each-way part of our 33/1 bet on the Austrian.

After such a great tournament, it was only fitting that the final was a classic encounter. Anderson was the favourite to win his first Matchplay title and looked to have worked his way into a winning position at 17-13. But Suljovic never gave up, winning the next five legs and keeping his dreams alive. With the winner needing to win by two clear legs, the match went into a tie-break, as the Blackpool crowd watched the match ebb and flow over the next few legs. At 19-19 Anderson got the crucial break of throw, and in the following leg took out double ten for the title, and land us a 7/1 winner.

We had BOTH finalists and what a final!

Visit our free darts betting tips and predictions page for a great bet on the darts from expert tipsters! We cover every major tournament and event from the Premier League to the Players Championship, we’ve got all your darts betting needs covered.