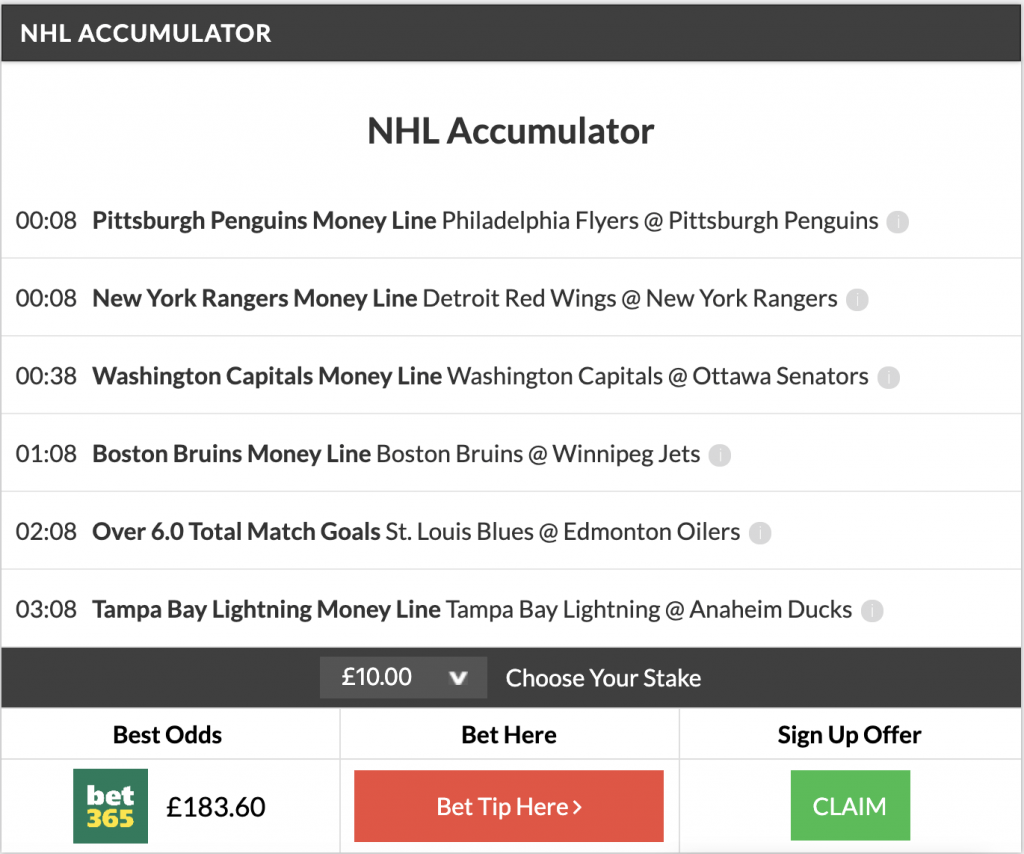 Our Sports Tipsters have been on fire lately and we have yet another winner!

Originally priced at 17/1, our NHL Accumulator landed at reduced odds of 8/1 because one leg was a push.

That’s now 3 Acca winners in 3 Days across all sports! 👍

In the first game we backed the Pittsburgh Penguins to beat the Philadelphia Flyers. And right off the bat we needed OT for this game to be settled. It was 3-3 after 60 mins of play, it didn’t take long for Sidney Crosby to score the winner for the Penguins in Overtime as they improved to 32-14 on the season and got us off to a winning start.

The NY Rangers beat the struggling Detroit Red Wings 4-2 at home. A strong third period decided this one as the Rangers scored three without reply during that period. This was their 24th win of the season.

The Metropolitan Division leaders Washington Capitals scored in each period to beat the Ottawa Senators. It was 5-3 in the end as Washington continued their strong season, while the Senators find themselves near the bottom of the Atlantic Division.

It was a low scoring affair between the Boston Bruins and Winnipeg Jets. The score was tied at 1-1 heading into the third period and it was Boston who was able to find the winner in the final 20 mins, extending the Jets’ losing streak to five games.

A push leg happened in the 5th game of the Accumulator, as we backed Over 6 Total goals between the St. Louis Blues and Edmonton Oilers. With the game ending 4-2 in favour of the Oilers, this leg was void and the odds on the Acca were reduced accordingly. We were down to the final leg of our bet!

In that final leg, the Tampa Bay Lightning did not let us down as they pulled off a win at the Anaheim Ducks. We have to thank Tampa Bay’s goalkeeper Andrei Vasilevskiy here as he stopped 23 shots on goal by Anaheim, which was the deciding factors in this one. With the win Tampa Bay continues their push to the top of the Atlantic Division, but more importantly they land our 3rd Accumulator in as many days!! 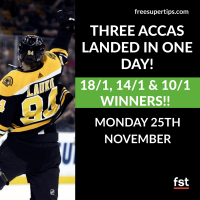