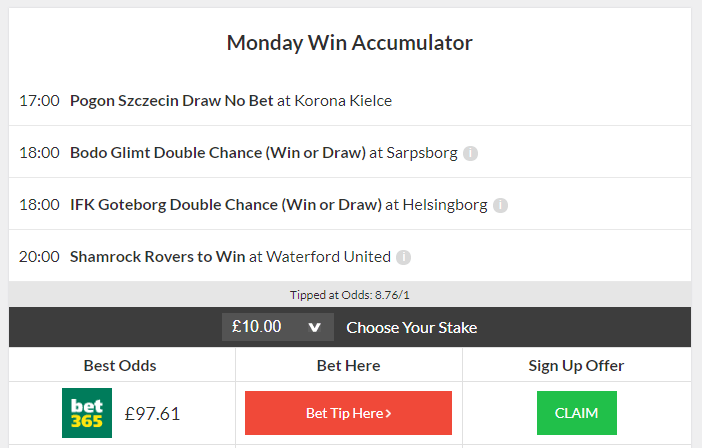 What a week it’s been here at FST! Our MLB tipster has been on fire, landing 3 accumulators over the last 10 days, while our football analysts landed a 10/1 Both Teams to Score and Win Double last Thursday! Now our football team have done it again, landing an 8/1 Win Acca and Daily Treble.

Here’s How It Went Down:

WHAT A WAY TO START THE WEEK! pic.twitter.com/gMC9TA074L

Monday’s accumulator consisted of four games from all over Europe: one in the Poland Ekstraklasa, one in the Norwegian Eliteserien, one in the Swedish Allsvenskan, and one in the Irish Premier League.

Pogo Szczecin was our first leg and we’d backed them ‘Draw No Bet’ – that means, if they won, that leg of the accumulator landed, but if they drew, then it would be refunded. We didn’t need to think too much on the latter after they in-form side put themselves 1-0 up early on against an out-of-form Korona Kielce and saw the lead out comfortably.

Next up were Bodo Glimt and IFK Goteborg at 18:00. We’d gone for both of these sides ‘Double Chance’, meaning a win or draw in these legs were enough to see us onto the final game. Neither of these were as comfortable. Both sides were trailing 1-0 with just 20 minutes left, but Bodo Glimt’s equaliser and Goteborg’s comeback kept us in with a chance – both of these featured in our daily treble too!

Over in Ireland, second-placed Shamrock Rovers were underway against Waterford and two spectacular first-half goals from Jack Byrne meant we were flying! Waterford hadn’t scored more than two goals at home since May so there wasn’t too much of a worry here. Shamrock Rovers saw the game out with a dominant 5-1 win and landed our 8/1 accumulator.

For the last leg of our Daily Treble, we needed ‘Both Teams to Score’ in Wolves vs Man United. After a relatively tame opening 25 minutes, Anthony Martial broke through for the visitors. Nuno Espirito Santo must have said something to the lads at half-time as Wolves came out very strong in the second half. Long-shot specialist Ruben Neves was the man that broke them through with a trademark goal from distance that – after a brief VAR scare – landed our bet!

Our Football predictions are free and posted daily on the FST website. Bookmark our Free Football Tips page for more winners.