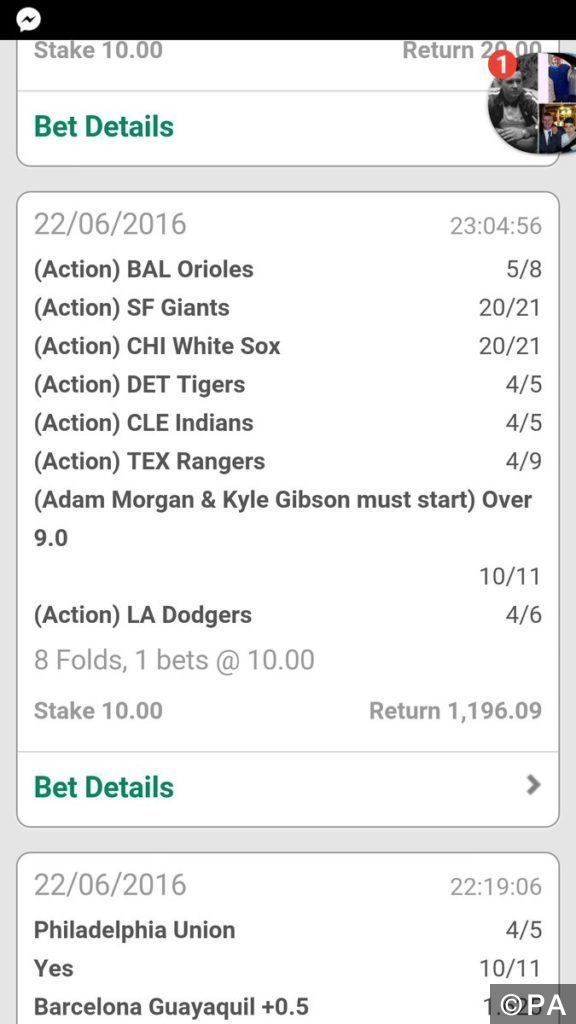 Bookie bashing while you sleep!

Our Mega Odds Accumulator consisted of 8 legs, 7 money line legs and a game total. Tipped up at 86/1, thanks to bet365’s parlay bonus our acca would be paid out with a 30% bonus due to having 8 legs. You can see how the Parlay Bonus works here

San Francisco Giants were a huge 6-1 down heading into the 4th innings, but 6 runs without reply in the 4th, 5th and 6th innings saw them stage a remarkable comeback. Both teams blanked the final 3 innings and San Francisco Giants completed their unbelievable turnaround to take the win.

Chicago White Sox also offered a fair amount of late drama, they went 4-2 down thanks to a superb 3rd innings from the Boston Red Sox, a 2-2 stalemate in the 6th meant that Chicago had it all to do in the final 3 winnings. They too staged a remarkable comeback, scoring 4 runs without reply in the final 2 innings to overturn a 6-4 deficit into an 8-6 victory. Another leg up on the acca.

The Acca was now down to the final game, starting 2 hours after any other, this was the make or break. LA Dodgers started well taking a 1-0 lead from the first innings, after the 3rd it was 2-2 thanks to 2 Washington runs in the 2nd and LA Dodgers equaling it up with a run in the 3rd. This was an incredibly close game as the next 4 innings passed without score. The dream looked to be over when, in the penultimate innings, Washington scored a run without reply giving them a 3-2 advantage going into the last but like the Giants, the Dodgers staged a remarkable turnaround scoring 2 off the final innings to win 4-3.

Here is how the Dodgers won the acca:

Our MLB Accumulator was made up from the core of the Mega Odds Acca, using 5 of the 8 legs. San Francisco Giants were the only strugglers on this one but performed a remarkable 6 run comeback without reply to seal a relatively straight forward winner.

We signed off with a clean sweep on our MLB Tips on Wednesday thanks to our Daily Double. This is the most confident bet hence the increased stake in relation to the acca’s and again that landed in style thanks to the Giants. No such drama in the Cleveland Indians game and the winning daily double added a tasty £74 profit to the total.

It is very important that you back our MLB tips with bet365 as they offer a parlay bonus on your winning bets. To take advantage you must have a bet365 account, they offer a 100% matched bonus up to £200 when you join here. By simply backing Wednesday nights tips with bet365 we have received an extra £158 profit. For more information on how the Parlay Bonus works check out our guide here

It’s great to see that we woke up to an abundance of winning betslips from our followers on twitter! These are just a few of the many winners, to see them all click here

@FootySuperTips – had a mare and put on the wrong bet – lovely morning boom – thanks lads pic.twitter.com/WNk8QXi3uE

@FootySuperTips talk about waking up on the right side of the bed! Hats off too you pic.twitter.com/tVb7hOsySK

Our MLB Tips go live at 6pm every day, Bookmark our MLB page here to make sure you never miss our MLB tips again!