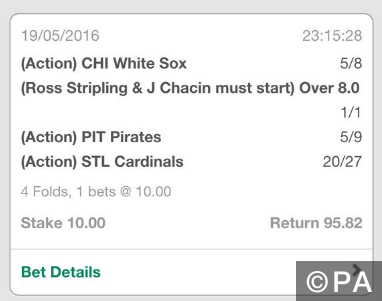 Who loves making money whilst they sleep? -> https://t.co/3zEIVYe7Q9

Thursday night’s Acca included 3 straight “Money Line” picks and an “Over 8.0 Run Total” selection – this meant that 3 selected teams needed to win their respective games, while the other game had to have a total of 9 or more runs.

Leg 1 of the Acca started very well, with the Pittsburgh Pirates dominating proceedings from start to finish, they opened up a 5-0 lead going into the 3rd innings, a lead that couldn’t be caught as leg 1 landed in style.

3rd leg we had a little wobble, A boring game between Chicago White Sox & Houston Astros saw very little action, with only a single run being tallied after the first SIX innings. Things started to pick up towards the rear end of the game, and Chicago White Sox finished up winning the game 2-1.

Moving on to the final leg of our 4-fold Acca, it was all down having 9 or more runs in the “L.A. Derby” match – Dodgers v Angels! The game started in true rivalry fashion, lots of passion and emotion echoing around the stadium and both sides giving it their all. By the end of the 5th innings, our Acca was complete! 9 runs had been scored!

A huge well done to everyone who followed our 6/1 MLB acca, here are some of the winners that were sent in to us via Twitter.

We provide free MLB picks daily so make sure you bookmark our page so you too can join in the overnight booms and make yourself some money!