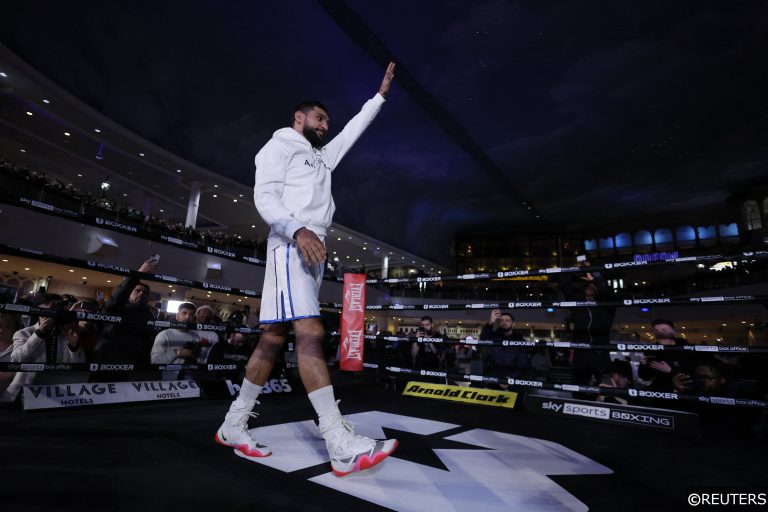 Amir Khan and Kell Brook finally meet on Saturday night in Manchester in what promises to be an action-packed showdown.

It could be argued that this fight has been made too late, but there is genuine animosity between the two fighters and we should be in for an entertaining contest even if both are now comfortably in the twilight of their respective impressive careers.

We managed to pick out Chris Eubank Jr to beat Liam Williams on points a few weeks ago and have a best bet, long shot bet and a 41/1 accumulator for Saturday’s action, read on to see who we’re backing ahead of the grudge match in Manchester.

Where to watch Amir Khan vs Kell Brook

The fight will take place at the Manchester Arena and viewers in the UK can watch the whole event on Sky Sports Box Office for £19.95.

Who is on the Amir Khan vs Kell Brook undercard?

Brook is rated as 8/13 favourite and Khan is the 13/10 underdog. If you are planning to have a bet on Brook I’d suggest the 5/4 on offer for the Sheffield native to win by KO, TKO or Disqualification would be the way to go – but personally I feel Khan will come out on top.

This is a hard fight to call on form as both have been inactive for some time now. This will be Brook’s first outing since he was stopped in the fourth round by Terrence Crawford in November 2020, while Khan has been out of action since July 2019.

Khan overcame Billy Dib in July 2019 but his last fight at world level came in April that year, when he lasted six rounds against Crawford.

Given the fact both have been out of action for significant periods of time the best way to make a call here is on their differing styles and attributes, rather than their most recent results. It isn’t fair to tag this as a ‘boxer vs a brawler’ type of contest as Brook is also a skilled technician and Khan has been involved in a few slugfests over the years (Marcos Maidana and Samuel Vargas spring to mind) but there is an element of that in this match-up and in these situations I tend to side with the technically superior fighter.

Having said that, Brook is probably the more intelligent of the two fighters but Khan has a few natural advantages – crucially superior hand speed and better footwork. If he gets his tactics right, avoids getting drawn into a war and sticks to his game plan he should be able to claim the win.

As an outside bet the 22/1 on Khan to win in rounds 10-12 could be the way to go. If Brook is behind late on expect him to throw a bit of caution to the win and that could give the Bolton boxer opportunities on the counter, while Brook was stopped in the 11th round against Erroll Spence Jr back in 2017.

Hassan Azim to win by KO, TKO or Disqualification vs MJ Hall

Hassan Azim is making just his second appearance as a professional after winning his debut in the first round. The 21-year-old faces MJ Hall, who is the embodiment of a ‘stepping stone’ fighter having lost 73 of his 77 contests, Hall isn’t easily stopped – but Azim is destined for greater things and expect him to make a statement with an early victory in this welterweight contest.

Hassan’s brother Adam is also in action in his third fight as he takes on Durham native Jordan Ellison over six rounds. Azim has one win inside the distance and one on points, and he may need the judges to claim a win over Ellison. This is only a six round contest and Ellison has only been stopped seven times despite losing 35 of his 50 fights, while he has also recovered to hear the final bell after being sent to the canvas in the past.

Middleweight Bradley Rea is unbeaten after 11 fights but faces what is potentially his biggest test yet against Ireland’s Craig McCarthy over eight rounds. McCarthy is also unbeaten, with eight wins and one draw, but Rea should have the quality to win this and is rightly the heavy favourites. Rea has won seven of his fights on points and the Stretford native can claim another points win on Saturday.

Natasha Jonas by Decision or Technical Decision vs Chris Namus

Natasha Jonas is a bit of a knockout specialist with seven of her 10 wins coming inside the distance. She is coming up against a very experienced fighter in Uruguay’s Chris Namus for the WBO world super welterweight title. Namus went the distance with Ema Kozin in her last fight, Jonas can claim the win – but may have to settle for a points win here.