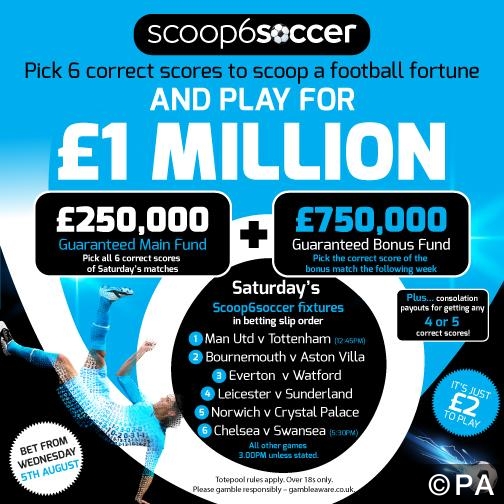 Arsenal managed to bounce back from their 4-0 humbling at Southampton on Boxing Day and managed a comfortable win against Bournemouth. However, that defeat did highlight some big defensive frailties in Arsenal and I think Newcastle can get a goal against them. But the Gunners are in excellent form up front and are coming up against a team fighting relegation, so I think a 3-1 win for them is a good backing.

Leicester have now been stopped from scoring twice in a row after previously finding the back of the net in all their matches of the season, but I don’t think Bournemouth will be able to stop them. They are the joint highest scorers in the Premier League and despite Bournemouth’s decent form their defence still hasn’t been great. I fancy the visitors to get a goal against the attack minded Leicester, but I fancy Leicester to get a few against them.

Manchester United’s goalless draw with Chelsea on Monday made it eight games without a win for them in all competitions, and they are struggling massively to find the back of the net. They haven’t looked very good up front all season, but they had a solid defence to rely on. Unfortunately that defence has slipped up a lot recently, and I think even the poor Swansea can get a goal against them. I don’t think the struggling visitors will manage to get a win though, so 1-1 looks good to me.

Norwich seem to have got out of the huge rut they found themselves in a couple of months ago, and they come into this game having only lost one of their last four league games. They managed to get a 2-0 win over Aston Villa on Monday, whilst Southampton failed to build on their impressive win against Arsenal by losing to West Ham. I think Norwich have a great chance of getting a win against Southampton so I’m going for a 2-1 home victory.

Stoke managed to get a very impressive and unexpected 4-3 win over Everton on Monday, a result which belies their usually sturdy defence. The visitors have kept a clean sheet in seven of their last 11 matches and they’re coming up against a West Brom side with limited attacking potential. This is especially true with the suspension of Salomon Rondon. The hosts aren’t in great form either, with just one win in their last six matches. I think Stoke will continue their excellent run with a comfortable 2-0 win over the Baggies.

Manchester City’s poor away form is jeopardising their race for the Premier League title. They haven’t won any of their last five away games and have lost three times, a record which will give Watford a lot of hope. The hosts are in excellent form, and even their defeat to Spurs on Monday won’t have dampened their spirits after a six match unbeaten streak that has taken them to within two points of European qualification. I think Watford’s excellent form coupled with Man City’s poor away record could easily result in a 1-0 win for the hosts.