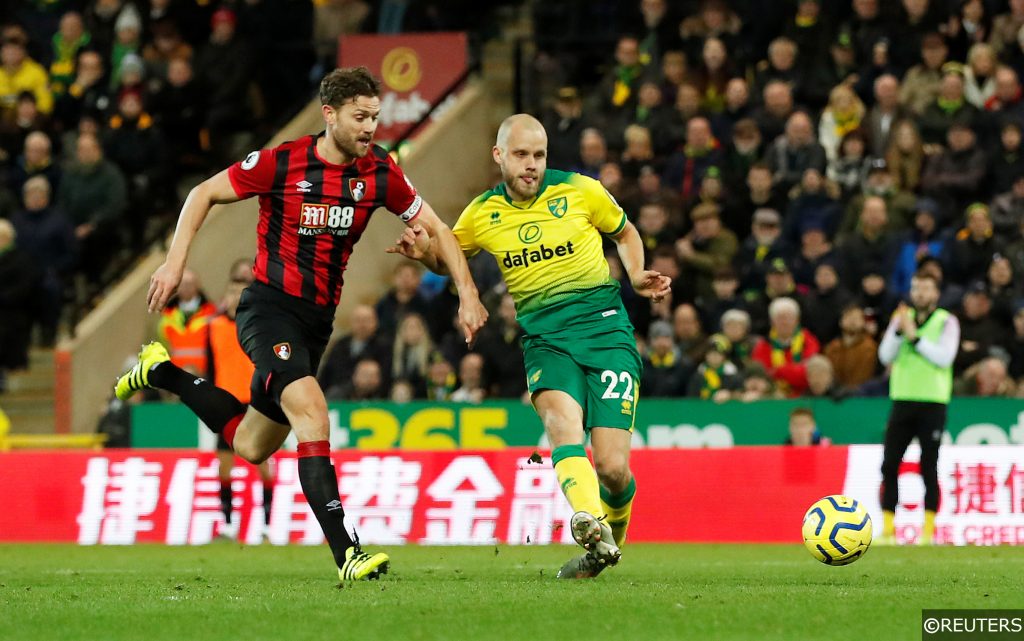 After a thrilling end to last season, we’re eager to see what the 20/21 Championship campaign has to offer. The second-tier is as competitive as ever, with Norwich looking to win the title for the second time in three seasons and both Watford and Bournemouth returning after five-years away.

After being a win away from promotion on three occasions last season Brentford pick up the fight again this term. However, there are plenty of sides shaping up for a tilt at promotion, so we’ve waded through the pretenders to pick out the main contenders.

There’s a clear divide in the Championship this season, with a big three forming at the top. Norwich, Brentford and Watford are consistently a cut above the rest in the betting. That’s clear when you consider that fourth-favourites Bournemouth are double the price of the leading trio.

With just two automatic promotion spots that already promises a season of ups and downs, but we can see that trio being breached over the course of the campaign. 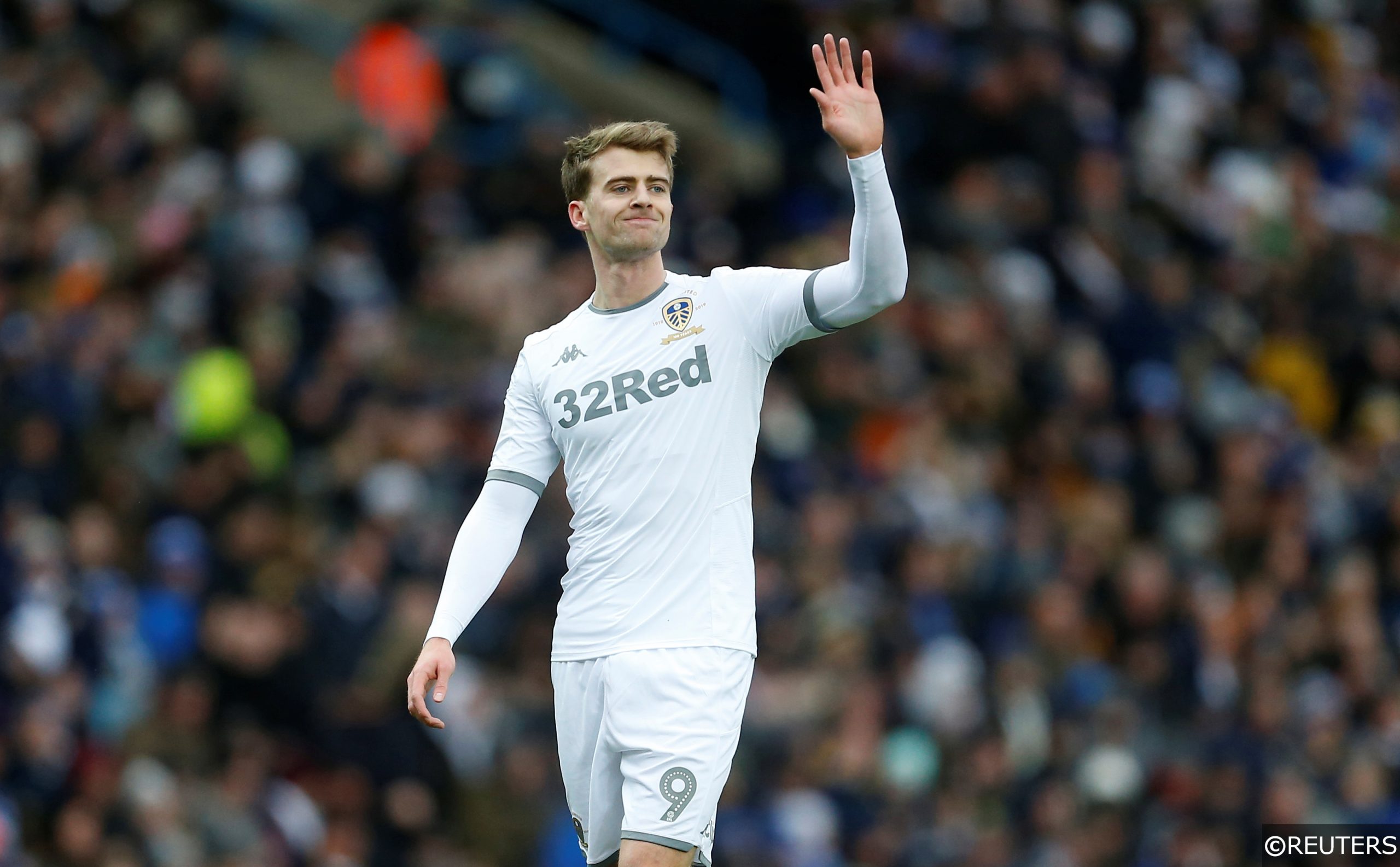 How many points do you need to win the Championship?

Over the last 11 seasons, the average points total to win the league has been 93. That was the tally picked up by Leeds last season, while each of the last six sides to win this division picked up at least 90 points.

The average total for Promotion in that period is 88. In fact, only twice in 11 seasons has a team picked up 88 points and not made the top two. The last side to do it was Fulham in 2017/18, but they went on to win the playoffs that year.

How do the relegated clubs do in the Championship?

The Championship is a very tough league to drop into, usually because it takes time to work your way back. Across the last 10 seasons, just seven of the 30 relegated sides bounced back straight away. Of those, 17 sides failed to even make the top six, while two – Wolves and Sunderland – were relegated again to League One.

However, there is a clear divide in the sides sent down. Of the 30 sides demoted since 2010, 10 have dropped out after one top-flight season. Five of those 10 have made the top six, with seventh the average finish across all 10.

Meanwhile, 12 sides went down after four or more top-flight seasons. Just two of those went straight back up, West Ham and Newcastle, managed by Sam Allardyce and Rafa Benitez respectively. Eight of the 12 failed to make the top six and their average finish was 11th.

Norwich drop down after one season away, while Bournemouth and Watford return after five years in the top-flight. If that pattern holds the Canaries look well priced to be the highest-finishing relegated side. We struggle to see anyone keeping up with a Norwich side who have amassed incredible squad depth at this level, especially sides like Bournemouth and Watford who need plenty of work. 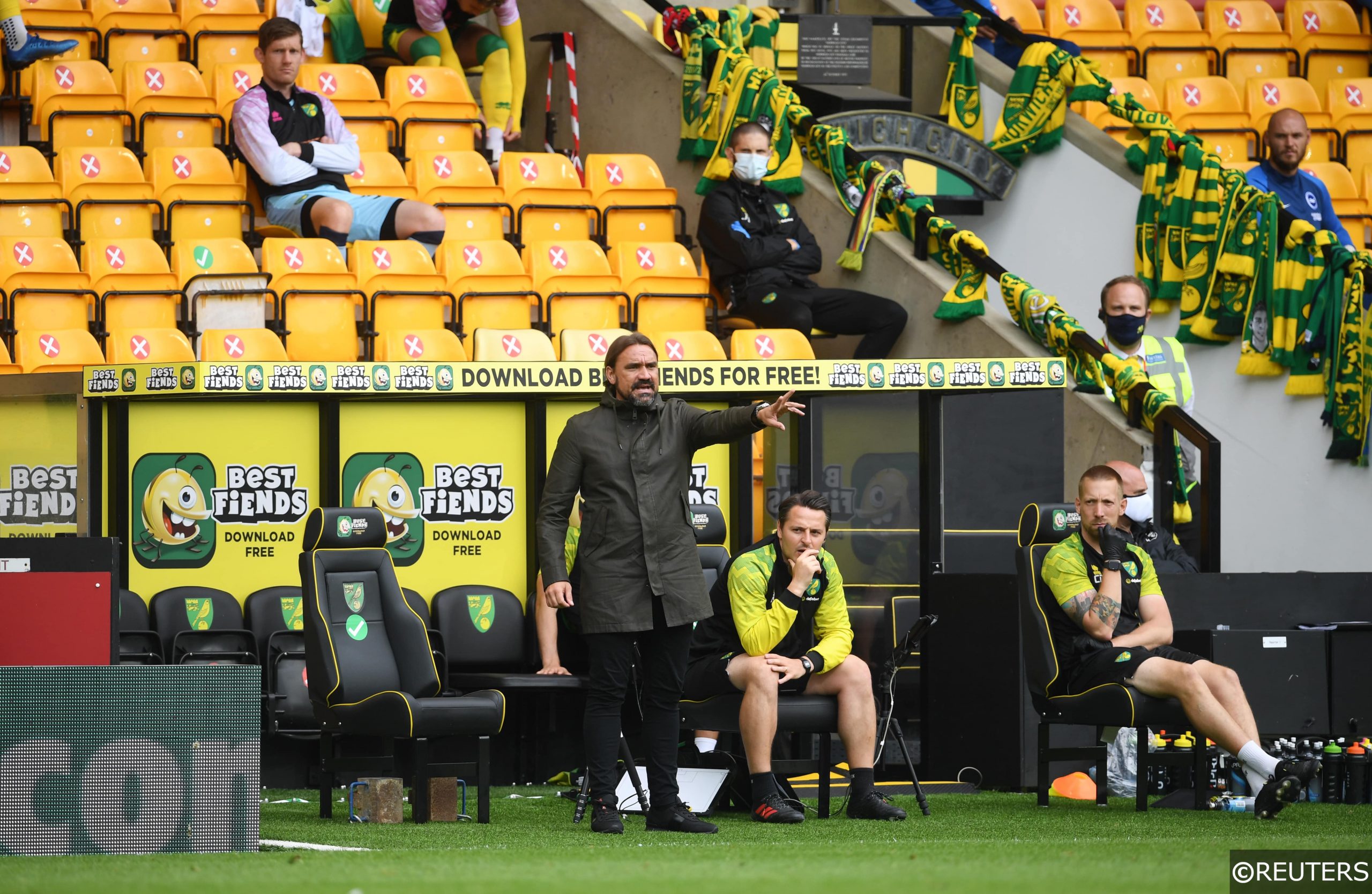 Norwich went down with a whimper last season, but the club seem to have repositioned themselves for a Championship title chase. They kept most of the squad which won the league in 2018/19, giving that young group more valuable experience.

Manager Daniel Farke has also stayed on, with the Canaries keeping faith in the man who led them to top spot 14 months ago. He’s improved this group across the two summer transfer windows since, making them a scary prospect at this level.

A busy window has seen them bring in Jordan Hugill to challenge Teemu Pukki up front, Wigan’s impressive creator Kieran Dowell along with loan signings Ben Gibson and Oliver Skipp. They’ve improved their spine and depth with a number of additions.

However, the Canaries will still look to old faces as key men here. Rumours of moves for Todd Cantwell, Emi Buendia and Ben Godfrey have disappeared, they’ve seemingly been priced out of the market. As a result, we see Norwich being too strong for the rest of the division, so they’re our Championship 20/21 winner prediction.

Watford and Brentford sit alongside the Canaries in the betting for promotion. The Bees went close last season, but could that hamper them?

Only once since 2008 has the losing playoff finalist recovered to make the top two the following season. That fate could hit the Bees this term, who are set to lose two of the lethal front three that hit 59 league goals last season. 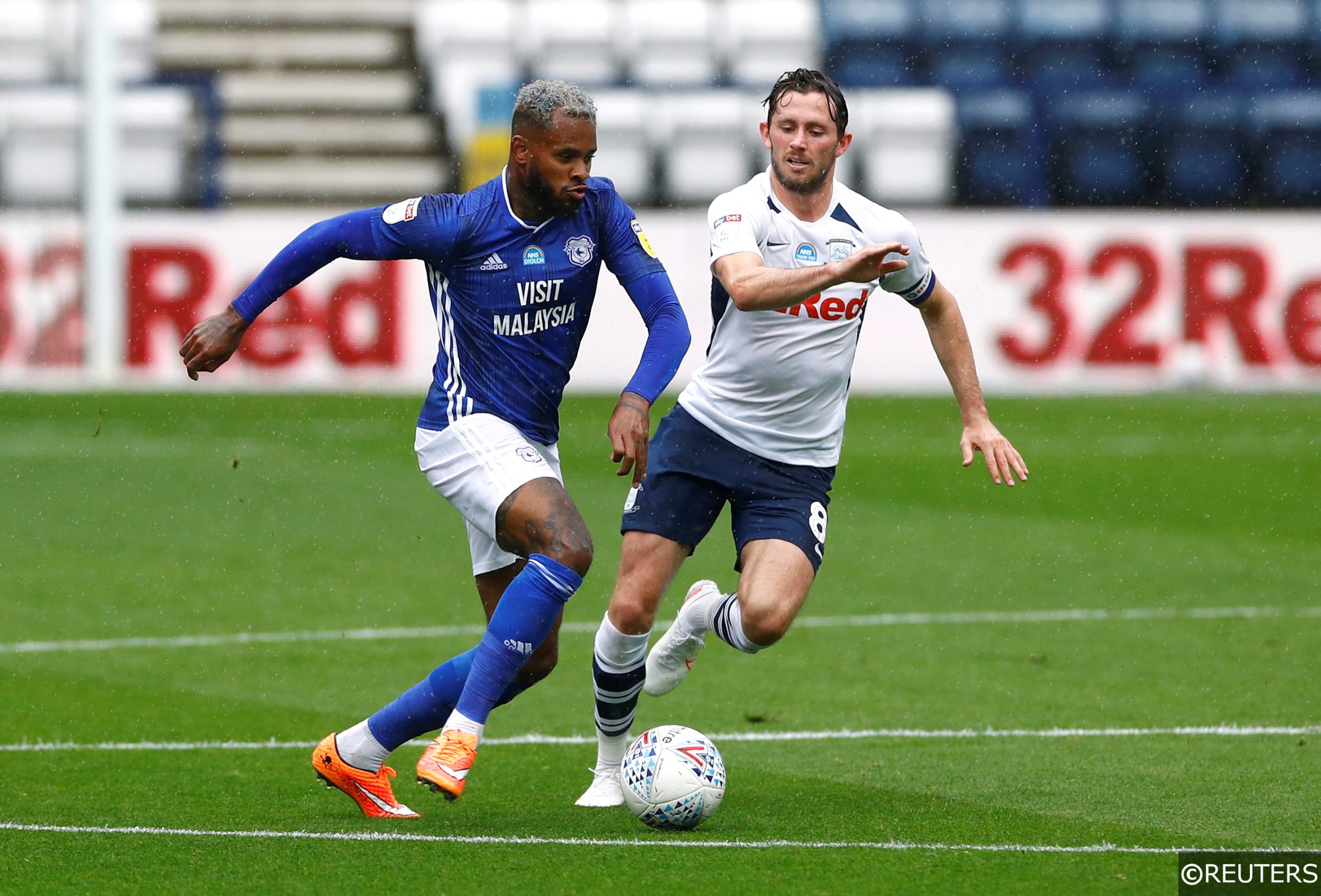 While there’s a clear front three in the betting, we like Cardiff for promotion this season. The sides making big moves and the relegated trio are too often the focus, but we’re making a stability argument for the Bluebirds here. They finished fifth last term after being rescued by manager Neil Harris when he arrived last Autumn. An unlikely playoff charge saw them worry Fulham in the semi-finals with a second-leg win at Craven Cottage.

Since then, the Bluebirds have made key additions to a squad which already looked like credible contenders. Their direct style of play has even more threat from out wide with winger Sheyi Ojo joining on loan from Liverpool, while Kieffer Moore looks like the perfect signing for the Bluebirds. The Welsh international solves Cardiff’s long-standing striker concerns. He also offers a big presence up top and a real goal threat, which we think completes a Cardiff squad which is good enough across the park to win promotion.

According to the bookies, all three relegated sides will at least make the playoffs and both Stoke and Nottingham Forest will make the cut. The Potters have featured at the top of the betting in three straight seasons, but they’ve finished 16th and 15th since returning to the second-tier. 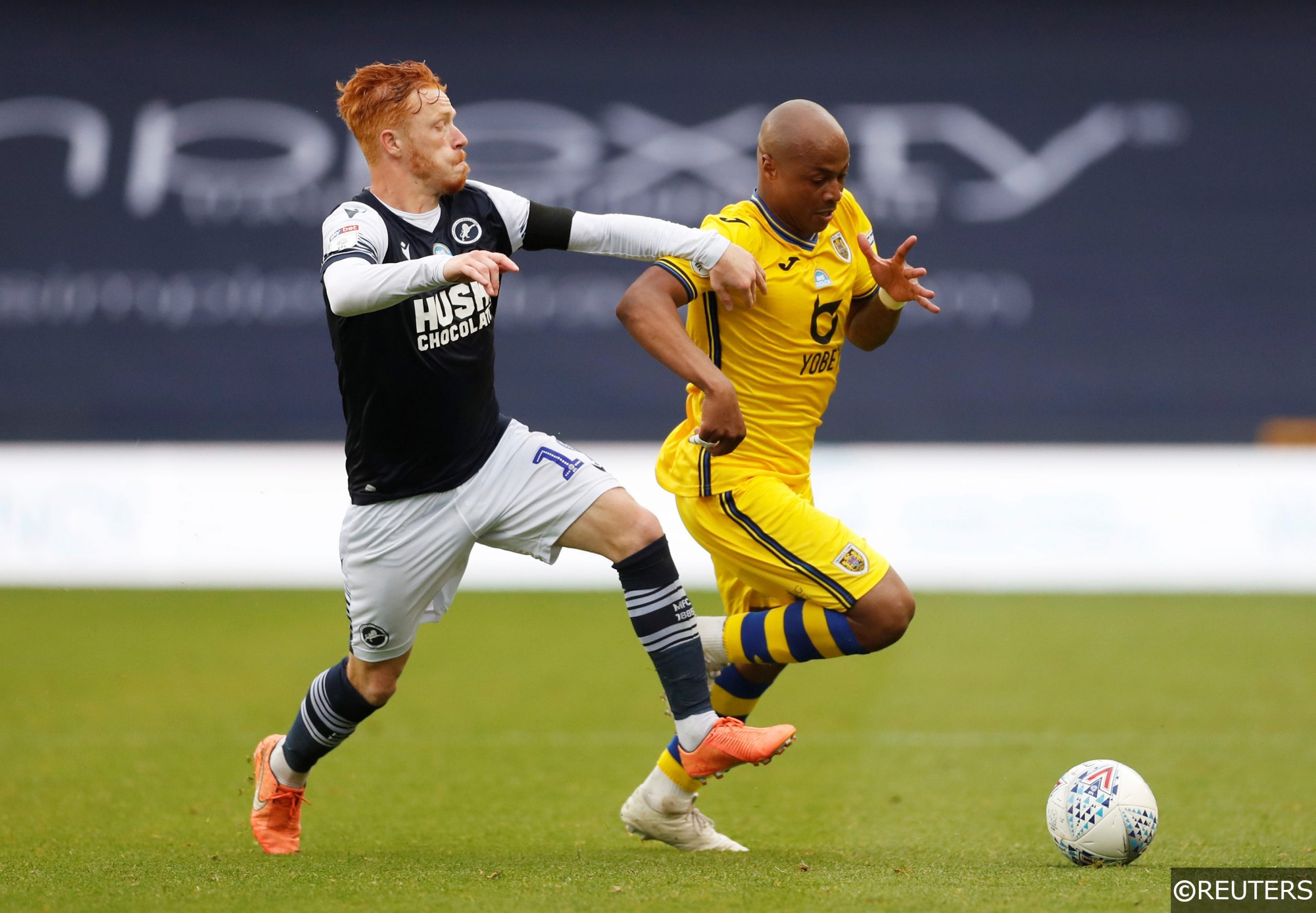 Millwall were a side in need of fresh energy when Neil Harris departed last season. Gary Rowett took Millwall to eighth after arriving at the Den, finishing only two points shy of the top six. That’s set them up for a good campaign, with their impressive transfer business marking them out as value in this market.

Ryan Woods joining on loan boosted their playoff hopes last term and he links up with Rowett for the third time. They’ve not lost anyone from last season while signing Troy Parrott on loan from Spurs adds real firepower. When you add in Mason Bennett as another attacking option, the Lions seem perfectly balanced to crack the top six. They’ve successfully built upon the defensive foundations Rowett installed last term, so we’re backing the Lions to make the playoffs.