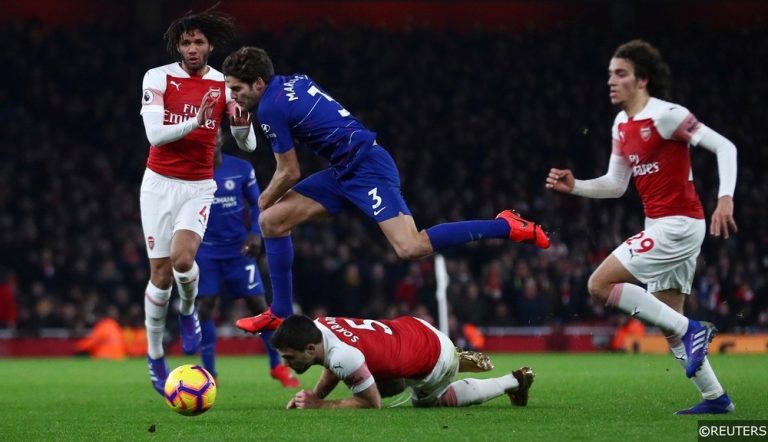 Chelsea meet Arsenal the 2018/19 UEFA Europa League Final in Azerbaijan next week, and while conditions for the game in Baku are certain to be hot and arid, there is every chance that it could rain goals at the city’s Olimpiya Stadionu on May 29th.

While the final matches of knock-out tournaments can sometimes be tense, attritional affairs, the climactic fixture in the Europa League generally produces the goal-scoring goods.

A minimum of 3 goals were registered in 5 of the last set of 7 exciting Europa League Finals stretching back to 2010 – in fact, an average of 3.44 goals were scored in the competition’s last 18 Finals since Liverpool’s famously enthralling 5-4 win over Alaves in 2001.

Now Chelsea and Arsenal are ready to write their own goal-laden chapter with goalkeepers’ tears in the annals of Europa League history.

Make sure to read our expert Chelsea vs Arsenal predictions and betting tips in our match preview here.

Matches between Chelsea and Arsenal rarely fail to deliver on their pre-match promise – over 2.5 goals were scored in 6 of the last 10 meetings between the London rivals in all competitions.

But while their domestic exploits might be enough to peak the interest of the total goals and overs/unders hunters and punters alone, the teams’ European records this season should help to grab their full attention.

Next Wednesday’s Europa League Final pits 2 of the tournament’s 3 most prolific teams against each other in Baku, and you can draw plenty of statistical parallels between Chelsea and Arsenal’s attacking output on the continent this season.

Chelsea have scored 32 times in the 2018/19 Europa League, a haul that makes them the competition’s leading goal-getters ahead of the Final in Azerbaijan.

In total, 41 goals rattled the net in the Blues’ 14 UEL matches to date, a figure that breaks down to an average of 2.92 per 90 minutes of action.

Arsenal are the UEL’s 3rd highest scorers on 28 goals, with beaten Semi Finalists Eintracht Frankfurt just ahead of them on 30. In total, 38 goals were registered in the Gunners’ European matches, which works out at an average of 2.71 goals per contest.

Interestingly, Chelsea and Arsenal rank 1st and 2nd for goals scored away from home in this season’s competition, plundering 13 goals each on their travels overall.

The Blues scored at least once in 100% of the UEL away matches they have negotiated in 2018/19, while Arsenal found a successful route to goal on 6 of their 7 away trips.

Chelsea and Arsenal’s consistent ability to open up defences away from their respective homes in the Europa League this season is a good omen ahead of next week’s Final.

Chelsea’s fixture with Arsenal features in our our whopping 28/1 Finals accumulator – you can check out the rest of our selections here!

Overall, Chelsea and Arsenal’s defensive performances in this season’s Europa League have been good, but the statistics show that there has been a discernible backslide in the quality of their defending as the tournament has progressed.

Chelsea and Arsenal have both conceded 9 goals in the 14 UEL fixtures they have played respectively en-route to the Final, shipping 0.64 goals apiece on average per 90 minutes.

However, somewhat understandably, their defensive numbers have noticeably worsened the deeper they have gone in the competition.

The Blues conceded just 0.5 goals per game on average in their round-robin section, though that average has jumped to 0.75 per 90 minutes across the 8 knockout round matches they played since. In total, Chelsea allowed their opponents to plunder 6 goals in 8 games in the tournament’s latter stages.

Similarly, Arsenal’s Group Stage 0.33 goals conceded per game average has rocketed up to 0.875 per match in the knock out phase, with the Gunners conceding 7 goals in 8 matches overall.

The numbers suggest that when the going gets tough, the finalists’ defences start to wobble, and that’s another potentially powerful ingredient for goals.

Maurizio Sarri out and Frank Lampard in? Check out the latest on Lampard’s potential return to Stamford Bridge here.

As we detailed earlier, next Wednesday’s Final sets 2 of the Europa League’s most potent attacks against each other in Baku, and in a fascinating sub-plot to that already compelling storyline, 2 of the tournament’s leading marksmen will also go head-to-head for the UEL’s Golden Boot.

With 10 goals in 11 Europa League starts this season, Chelsea’s veteran French centre-forward Oliver Giroud is the currently the competition’s top scorer. The 32-year old target-man was used sparingly in the Premier League in 2018/19, starting just 7 times in total during Maurizio Sarri’s first year at Stamford Bridge, however, Giroud has taken centre stage on the continent for the Blues.

A goal for Giroud against his previous employers Arsenal next week would almost certainly land him the prize for top scorer this season ahead of his last remaining challenger for that gong, Pierre Emerick-Aubamyeang.

With 8 Europa League goals this season, Arsenal’s rapid attacker trails Giroud by 2, though the Gabon international has already proved that his is capable of bagging goals in plural amounts this season.

Remarkably, Aubameyang has scored 2 or more goals on 8 separate occasions in 2018/19, a run that includes a return of 2 or more goals in 3 different Europa League matches this term..

2 goals for Aubameyang next week could allow the former Dortmund star to come from nowhere to snatch a share of the Europa League top scorer award, to go along with the shared Premier League Golden Boot award he picked up last week along with Liverpool pair Sadio Mane and Mohamed Salah.

Aubameyang is available at a lucrative looking 10/1 with BetVictor to score 2 or more goals against Chelsea next week.

Olivier Giroud and Pierre Emerick-Aubameyang’s two-way tussle for individual honours next week only heightens the potential for goals in Baku, and supporters should ready themselves for an enthralling night of Europa League action in Azerbaijan.

Check all our match previews, predictions and betting tips for all the latest football fixtures here.