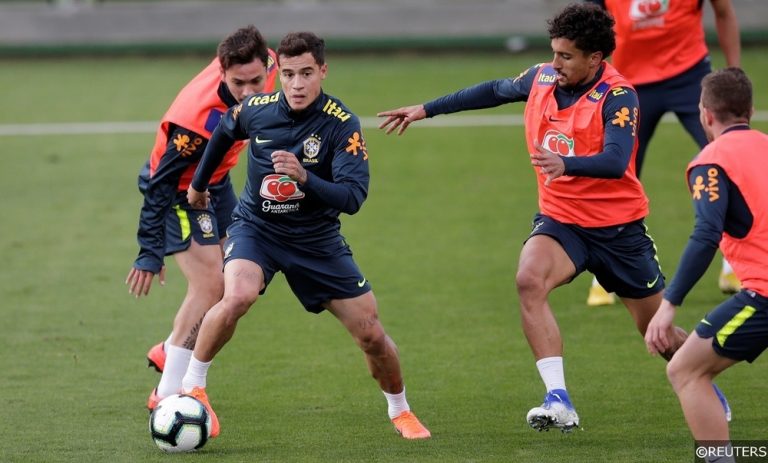 Update: Neymar was ruled out of the tournament after rupturing his ankle ligaments in a friendly against Qatar. Our original Top Goalscorer tip has been amended.

The 46th instalment of the prestigious Copa America kicks off on the 14th June as hosts Brazil face off against Bolivia in Sao Paulo. The world’s most successful footballing nation are looking to end an unusually barren spell this summer, with their last major trophy being the 2007 Copa America title and their most recent attempt at winning a title on home soil coming to a humiliating end in 2014.

Meanwhile, Chile will be aiming to take their ageing squad to a 3rd consecutive Copa America crown, and in doing so would be the first team to successfully defend the title twice since Argentina did so in 1947.

Elsewhere, Lionel Messi continues the hunt for his first international honours, Carlos Queiroz takes charge of Colombia for his first tournament, Uruguay look to their impressive looking blend of experience and youth, and Venezuela hope to upset the odds with a squad filled with recent U20 World Cup Finalists.

Yes, they’re massive favourites in the betting markets, but it’s hard to argue against this Brazil side to be honest. Not only do they have the strongest squad in the tournament, but they also boast the home advantage. They have lifted the trophy on all four occasions when hosting the Copa America, and apart from that dreadful showing in 2014 they have been pretty much unbeatable at home. In fact, those losses to Germany and Netherlands are their only competitive defeats on Brazilian soil since 1975.

Looking at their squad it’s difficult to see any team getting the better of them to be honest. They have a seemingly perfect blend of youthful vigour, experienced internationals, and top class players in their prime. Neymar may have been stripped of the captaincy, but the PSG forward boasts 60 goals in 96 appearances for Brazil and will be a constant threat.

The less experienced Gabriel Jesus has a very respectable 13 goals in 27 appearances, and they boast a midfield filled to the brim with quality. Casemiro, Arthur, Phillipe Coutinho, Allan, Fernandinho, and Lucas Paqueta will vie for the midfield spots, ahead of a defensive lineup that includes Thiago Silva, Marquinhos, Alex Sandro, and Dani Alves. Add two of the best goalkeepers in the world, Alisson and Ederson, into that mix and you have an extraordinary looking team.

Brazil’s nearest challengers in this department, Argentina, don’t exactly have a bad squad. They boast Lionel Messi, Sergio Aguero, Paulo Dybala, and Angel Di Maria, but it’s a team that have really struggled in terms of cohesion. Messi, perhaps the greatest player in history, is yet to win any major international honours, which is extraordinary considering the top quality players that have surrounded him throughout his career.

Brazil come into this tournament having won seven of their eight matches since their World Cup campaign was brought to an end by Belgium. They are understandably heavy favourites to lift the trophy in the Estadio do Maracana in July, but we still think they offer good value. 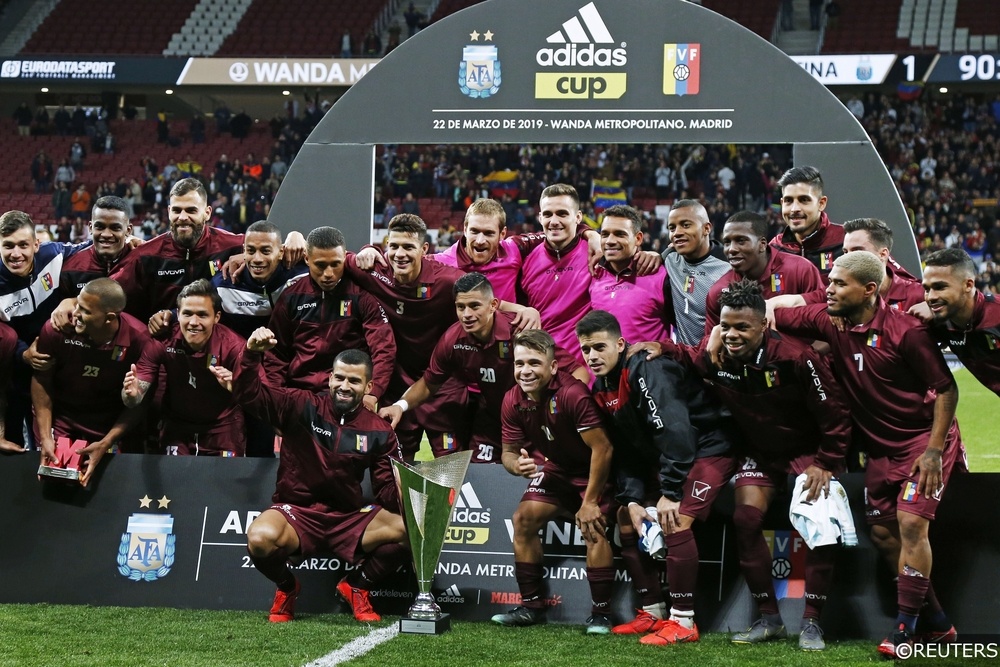 It’s not often that you hear Venezuela mentioned as potential tournament winners. In fact, their best ever showing was a 4th place finish in the 2011 Copa America and they have never taken part in a World Cup. However, this could be the underdog’s time to shine.

Venezuela reached the final of the U20 World Cup back in 2017, and many of the players from that squad have made the step up to the senior squad. The likes of Wuilker Farinez, Yangel Herrera, Adalberto Penaranda, and Ronald Hernandez have all become international regulars, and they have a very promising front line to call upon. Salomon Rondon enjoyed a fantastic second half to the season with Newcastle, while Josef Martinez has scored 41 goals in his last 49 MLS appearances.

This is a team that beat a full strength Argentina side 3-1 in Madrid just a few months ago, and while they lack the sheer quality that the likes of Brazil and Argentina possess they do have a well suited playing style. Venezuela are organised at the back and swift when launching counter attacks, so they’re definitely a team to watch at this price. 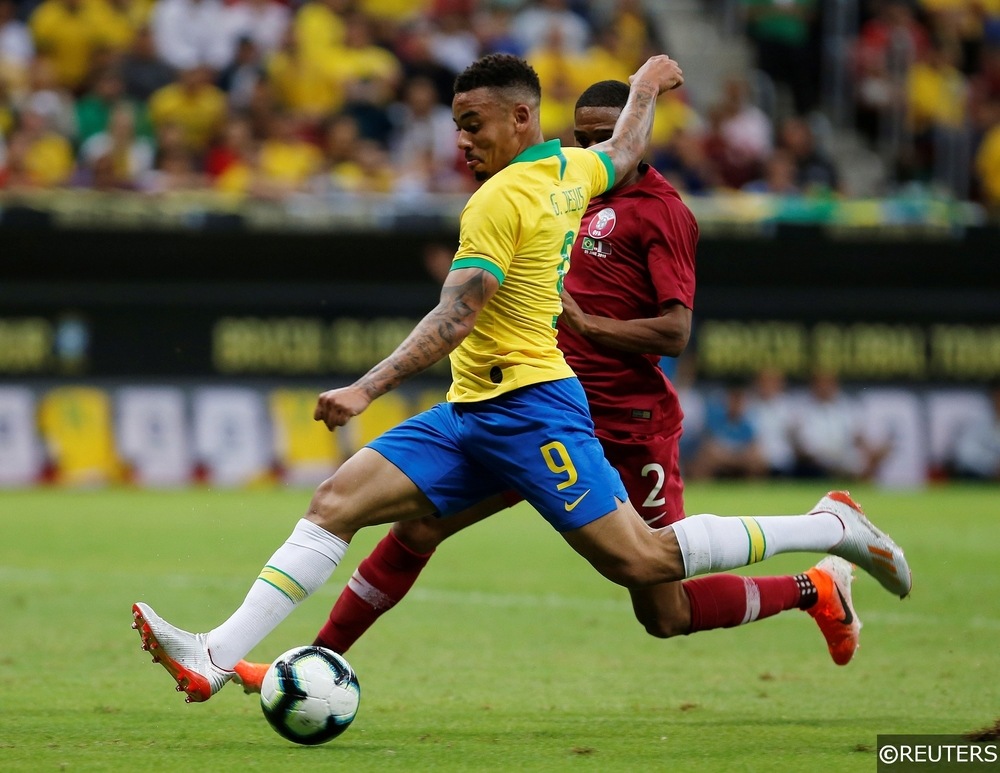 After Neymar’s unfortunate ankle ligament rupture against Qatar, a lot of the goalscoring onus will fall on Manchester City striker Gabriel Jesus as Brazil look to lift the Copa America on home turf. The 22 year old has often been utilised on the flanks of Brazil’s attack, but against Qatar he started at the top end of a 4-2-3-1 system and rewarded that decision with a 24th minute goal.

That being said, even if Roberto Firmino comes back into the team and pushes Jesus out wide, the youngster still poses a considerable threat. He scored two goals against Czech Republic from the left hand side, despite only playing the final 18 minutes of the game.

Jesus has now scored 14 goals in his 28 Brazil appearances, making him the top scorer in the squad after Neymar’s withdrawal. He should be well rested coming into this tournament as well, having only started eight Premier League games this season for The Citizens. Obviously there is plenty of attacking talent within the Brazil setup, but Jesus is the most clinical of the lot and he looks a fantastic price to get the Golden Boot this summer.

Some players simply love certain competitions, and Paolo Guerrero is one who loves Copa America. The veteran Peruvian has finished as top scorer in two of the last three iterations of the tournament and has netted a total of 11 goals across four Copa America campaigns.

He may be 35 years of age, but Guerrero is still Peru’s talisman and he even boasts some admirable domestic stats to back his claim to the Golden Boot up. He has scored six goals in his last eight appearances for Internacional, and with an each-way bet paying out on the top two scorers he’s well worth backing at this price. 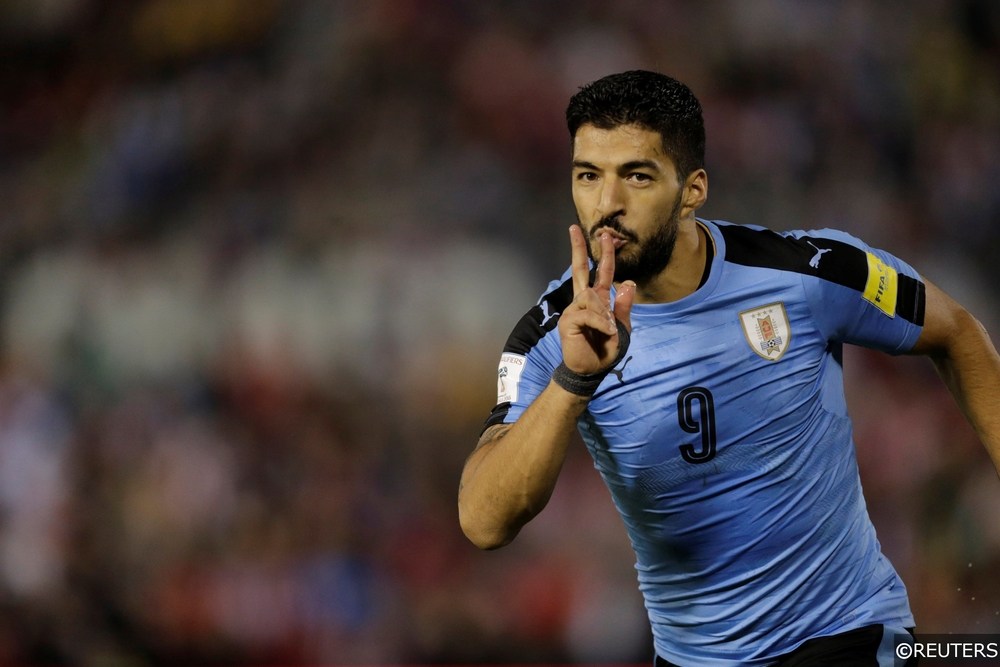 The tournament hosts and favourites, Brazil should breeze their way to the top spot in Group A. They have to contend with decent looking Peru and Venezuela sides and a Bolivia team who are expected to be the whipping boys, but Neymar and company should have more than enough about them to see off any challengers.

Argentina are the bookies’ favourites for Group B, but we fancy Colombia to produce a minor upset in Brazil. We’ve already spoken about the lack of cohesion within the Argentina squad, and Colombia are a side of enough quality to take full advantage of that. Not only that, but Argentina are Brazil’s most fierce rivals, so they won’t get any sympathy from the neutral crowds here.

Chile may be the defending Copa America champions, but they are undoubtedly a team on the decline. They failed to qualify for the World Cup last summer, and stars such as Arturo Vidal, Charles Aranguiz, and Alexis Sanchez are all the wrong side of 30 now and coming off the back of unspectacular individual domestic campaigns.

Uruguay have lethal attackers in Luis Suarez and Edinson Cavani, a fearsome defensive partnership of Jose Gimenez and Diego Godin, and plenty of talent in midfield from Rodrigo Bentancur, Lucas Torreira, and Federico Valverde. Not to mention the perennially competitive Oscar Tabarez at the helm.