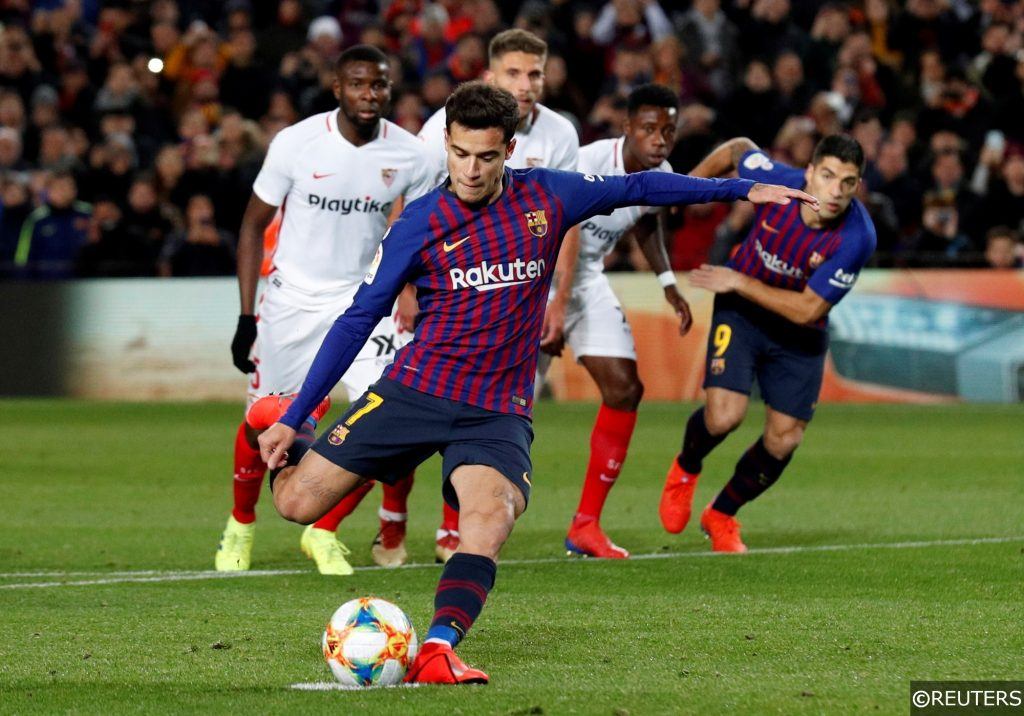 Philippe Coutinho’s agent has suggested the Premier League could be the next destination for the fallen Barcelona star, who has enjoyed a good season at Bayern Munich, posting nine goals from midfield in 32 matches, but is not wanted on a permanent basis by the Bavarians.

A host of clubs across the continent have been linked with moves for the Brazilian since he became available, with Barca reportedly setting a £57 million price tag, but who would benefit the most from his acquisition? Here is a look at five clubs who should try and sign Coutinho this summer.

Arsenal have been in dire need of a creative spark to supply Pierre-Emerick Aubameyang and Alexandre Lacazette and, although recently out of the north London side’s price range, Barca’s desire to sell could play into the club’s hands.

Although agent Joorabchian confirmed he would not allow the fact he is an Arsenal supporter to play a part in Coutinho’s transfer, he is sure to put in a good word for the Gunners, who could well free up funds with big-wage departures such as Mesut Ozil later this summer.

Coutinho provides goals from midfield – something Arsenal have been desperate for – and a name like that in their ranks could begin to re-establish the club as one of Europe’s elite outfits.

Coutinho may need to up his work-rate to take up the main playmaker role in Frank Lampard’s team but once that potential stumbling block is navigated he could be an excellent addition for the Blues.

The 27-year-old is arguably entering the peak phase of his playing career and would be the ideal personality to introduce to such a young team still learning their trade.

His arrival would also keep Mason Mount, whose performances have arguably dipped since the turn of the year, on his toes and he could link up with compatriot Willian, if the winger stays put at Stamford Bridge.

Spanish football expert Guillem Balague said on his Youtube channel: “The thing is, only Leicester have shown interest in Coutinho. Only Leicester.” So why is all the talk about a move to London?

Well money no doubt plays it’s role. Coutino would cost in excess of £200k per week, while Jamie Vardy is their highest current earner on £100k. But if Leicester were to sell the likes of James Maddison this summer, they would surely have the financial firepower to lure a big name like Coutinho to the King Power.

He could very well be the player to help solidify the club’s status as a top-four outfit and, having flourished under Brendan Rodgers at Liverpool, he would fit their free-flowing, positive system like a glove.

PSG already boast a wealth of attacking talent in Edinson Cavani, Kylian Mbappe, Neymar and Mauro Icardi. They are no strangers to making a handful of big-money signings each summer and Coutinho would represent a fairly safe acqusition.

Midfield is arguably an area of weakness for the French giants, who have likes of Marco Verratti and Angel Di Maria to call on but one operates in a deeper midfield role while the other is a winger. PSG do not really have an outstanding number ten and Coutinho could actually be assured of game time in a squad swelling with stars.

A move to Paris would also link Coutinho with compatriot Neymar and the two have had a productive relationship for the Brazilian national side.

They have not been among the clubs heavily linked with Coutinho’s signature but Inter Milan could do worse than relax their alleged, fanciful pursuit of Lionel Messi and opt for a more accessible South American.

The current crop of midfielders at the San Siro – Matias Vecino, Borja Valero and Marcelo Brozovic – are all deep-lying midfielders with the exception of Christian Eriksen, who can play on the flank if needed anyway.

The Inter team are industrious and efficient but lack flair and style to compliment these traits and, having shown he can cope with the physicality of the Bundesliga and the Premier League, Coutinho could be a handful for Serie A defences.