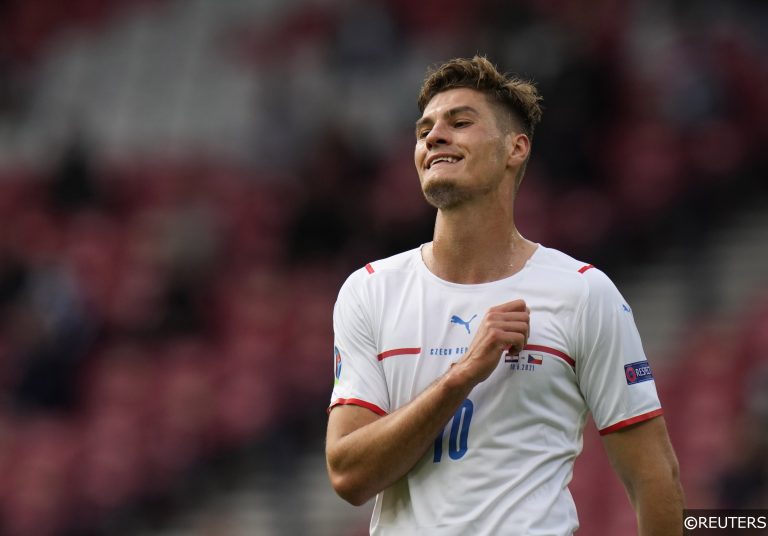 With Euro 2020 now nearing a conclusion, the next few weeks could see a flurry of transfer activity as clubs step-up their preparations for the new campaign and a few players who impressed in the tournament may well be in line for big moves.

There are plenty of candidates, and we’ve whittled down the list to five standout performers who could be in line for blockbusters deals during the summer transfer window.

Any potential suitor would have to fork out a huge fee for Patrik Schick this summer after his exploits for the Czech Republic.

The 25-year-old Bayer Leverkusen striker scored five goals as the Czechs made a memorable run to the quarter finals, including an absolute stunner from close to the halfway line in the 2-0 group stage win over Scotland.

Schick only joined Bayer from RB Leipzig last summer in a reported €26.5million deal, signing a five-year contract.  The ball is in Leverkusen’s court in terms of any possible move for the forward but if they do decide to sell expect the Bundesliga club to make a healthy profit.

Sassuolo’s Manuel Locatelli began Euro 2020 with a bang as he started the first two group games – scoring twice in a 3-0 win over Switzerland.

The midfielder lost his starting spot to the fit-again and more experienced Marco Verratti since the knockout stages began but he has still been involved as a substitute and has been an important cog in a well-oiled Italian machine regardless.

The 23-year-old has two more years left on his deal with the Neroverdi and now looks like a good time for Sassuolo to cash-in to get the biggest possible price.  There has been speculation Arsenal are interested, but Serie A heavyweights Juventus appear his most likely destination.

Dani Olmo has had a somewhat unorthodox route to full Spain international after leaving the Barcelona academy as a 16-year-old for Dinamo Zagreb back in 2014.

A desire for first-team football was behind that surprise move and the decision paid off, as he made his Dinamo debut in the 2014-15 season and scored 34 goals in a 124 games for the Croatian club before heading to the Bundesliga with RB Leipzig in January 2020.

The 23-year-old may have missed in the penalty shoot-out in Spain’s semi-final defeat to Italy but that should not detract from a strong tournament overall, with Olmo weighing in with three assists to help La Roja reach the last four.

Olmo is yet to play in La Liga, but the Catalan may get a chance to return to his homeland this summer with both Barcelona and Real Madrid apparently keen on signing him from Leipzig.

Jack Grealish probably hasn’t had as strong a Euro 2020 as he would have hoped for having made just one start, with four appearances overall, but that won’t put his suitors off.

The gifted playmaker’s performances for Aston Villa in the domestic campaign have made him a wanted man this summer, with both Manchester clubs linked with Grealish at regular intervals.

Villa are keen to keep hold and it would take a truly astronomical fee to sign him this summer but that doesn’t mean a mega transfer is out of the question.

Denzel Dumfries is currently contracted to PSV Eindhoven but after some big displays for the Netherlands at Euro 2020 he could well be heading to one of Europe’s big leagues before the new season gets underway.

The wing-back, who managed two goals in the group stages, has emerged as a potential replacement for Achraf Hakimi at Inter Milan after the Moroccan’s big money move to Paris Saint-Germain and has also been linked with Premier League club Everton.