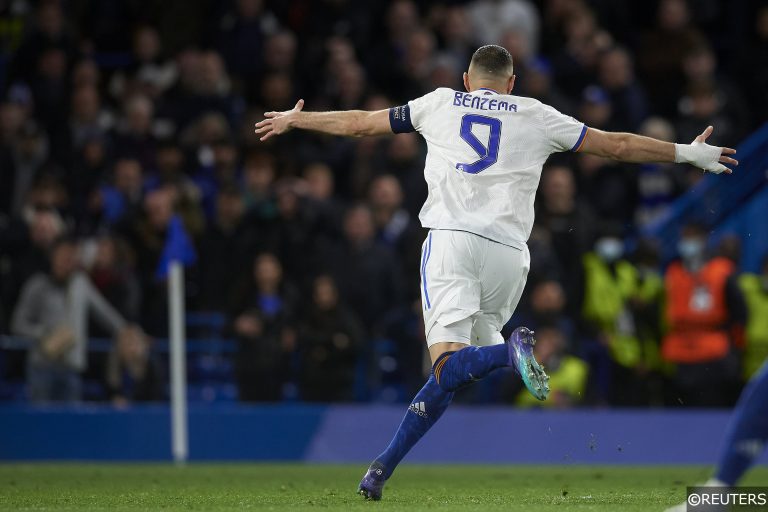 The showpiece event of the European season takes place on Saturday night at the Stade de France in Paris as Liverpool face record winners Real Madrid in the Champions League final.

This will be the second time these clubs have met in the final in five years as Real won 3-1 in Kyiv in 2018. It is also the third time these two European heavyweights have met at this stage, with Liverpool emerging victorious in their first encounter way back in 1981.

Los Blancos fought back against Manchester City in the semi-finals as they trailed 4-3 after the first leg and were 1-0 down (5-3 on aggregate) going into injury time in the second but somehow managed two late goals to force extra-time, with a Karim Benzema penalty deciding matters in the additional 30 minutes.

In the first knockout round, Real lost 1-0 in France to PSG and were then 1-0 behind in the second leg but a 17-minute Benzema hat-trick in the second half turned the tie around. In the quarter-finals against Chelsea, they trailed 3-0 in the second leg and 4-3 on aggregate but ultimately managed to come through in extra time – meaning they have trailed at some point in all of their European ties since the group stages ended.

As such, it wouldn’t be a huge shock to see the Madrid outfit recover from a deficit to ultimately claim the trophy in Paris on Saturday and we’ve picked out five potential ways to back Real to mount a comeback.

1. Back Real Madrid To Win From Behind

Another option is the half-time/full-time market with a Liverpool/Real Madrid bet, which means you are backing the Premier League club to be ahead at the interval but Real to win the match. They did this against PSG in Madrid earlier in the competition and came back from 2-0 down to win 3-2 at Sevilla in La Liga just over a month ago, so the 28/1 on offer with bet365 for a Liverpool/Real Madrid result does look tempting.

We’ll be publishing our own Ultimate Bet Builder later this week, and Bet Builders offer a number of ways to back Real to win from behind. You could include Liverpool to score the first goal, Liverpool to be winning at half-time or a Reds player to open the scoring and then have Los Merengues to win the game as another selection, alongside a multitude of other possibilities.

4. Back Karim Benzema To Score The Last Goal

Karim Benzema scored the winning goals against Paris Saint-Germain, Chelsea and Manchester City and if Real do come back and win against Liverpool then chances are the Frenchman will play a key role. This may technically not be backing Real to win from behind in the truest sense, but it seems likely that if the La Liga champions do grab a winner late on it will be Benzema who puts the ball in the net.

5. Back Real Madrid To Win On Penalties

OK, Real could win on penalties on Saturday without ever having been behind but they will have had to hold off Liverpool’s awesome attack for 120 minutes to get to this point – so a triumph on spot-kicks may well feel like a comeback victory. If the final were to be decided via a shoot-out I would consider it a 50/50 scenario myself – despite the Reds’ penalty success against Chelsea in the FA Cup final – and as Real are the slight underdogs in this market at 12/1 (Liverpool are 11/1) if you do fancy this clash to go the full distance the Spanish side offer better value.