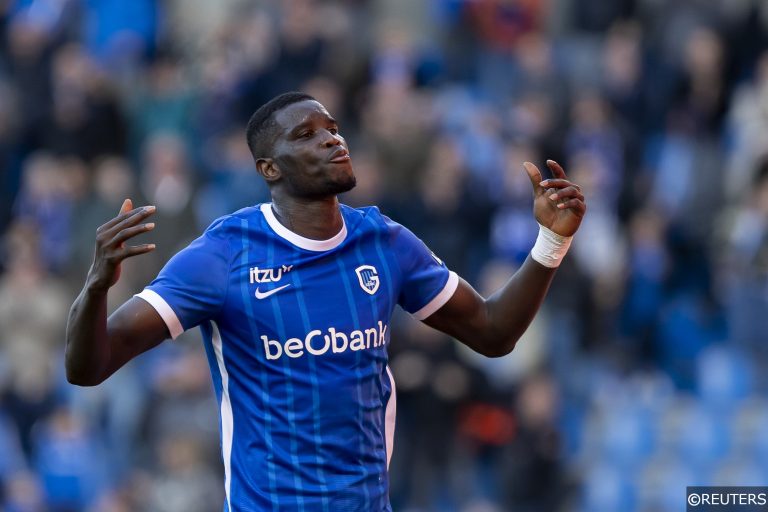 Earlier this month we had a near miss with our debut Hotshots acca. We saw four of our five selections score, with Robert Lewandowski the man to cost us a 114/1 acca!

With that still on my mind, I’ve combed through the week’s games to pick out another five goalscorer tips, with the combined selections adding up to a massive 109/1 acca!

Midfielder Baena is Villarreal’s top scorer in both La Liga and the Conference League, scoring a combined seven goals across the competitions. Baena is backed to add to that with a strike against a leaky Osasuna side, especially as he’s scored in his last three home games.

Onuachu has hit form for Genk, which is bad news for a Westerlo side who have conceded 14 goals in six trips this term. Genk have put together a fine winning run, partly inspired by Onuachu who has scored in each of his last three matches. With four strikes in that run, back the striker to add to that on Tuesday night.

Having made Lukaku look deadly enough for Chelsea to bid almost £100million for him, Antonio Conte is working wonders with Harry Kane, too. The Spurs striker has gone to another level under the Italian, scoring in eight of his last nine Premier League games. With a goal in five of his last six matches in all competitions, back Kane to strike at a poor Man United side.

Mitrovic has been a standout for Fulham this season, scoring in four of their five home games after his strike on Saturday. The forward returned from injury in that clash and he’s now scored in six of his nine league games this term, so back him to find the net against a Villa side who are struggling this term.

Friday – Vlahovic to score against Empoli

Finally, Empoli look defensively shaky and that should play into the hands of Dusan Vlahovic, the man who is one of the few bright spots for Juventus this term. He scored the winner against Torino in Saturday’s derby, taking him to six goals for the season. With a goal in four of his last six for club and country, back Vlahovic to strike this week.