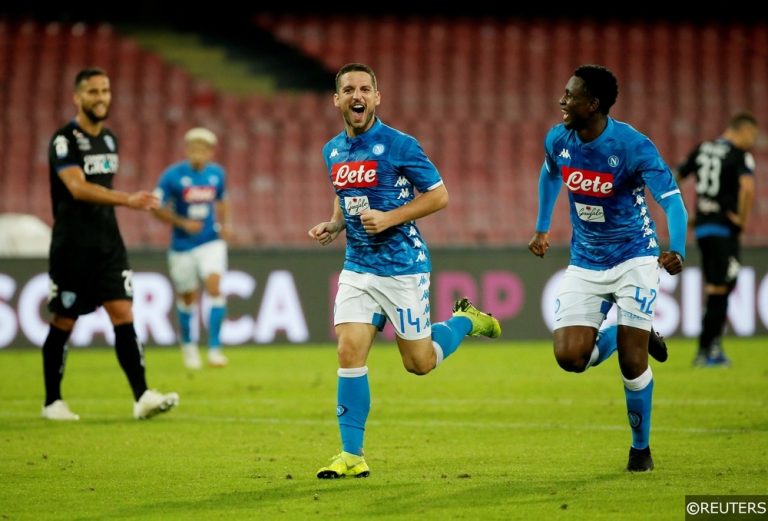 With one more round of games to play, Italy’s four Champions League sides are on the verge of a huge achievement. While recent years haven’t been the most productive for Italian sides in Europe, they could make up a quarter of the last 16 if all goes to plan. This week sees all four sides in action, as they look to become the only country with four teams in the next round.

It’s come down to the wire in two groups, bringing excitement to what’s been a pretty straightforward group stage. Both Juventus and Roma are among the 12 sides who have booked their place in the next round. That leaves Napoli and Inter Milan fighting for two of the remaining four, so we’re looking over this week’s Champions League fixtures to see if the Italian sides can all squeeze through.

The most dramatic group left is Group C, the only one which hasn’t had a team qualify so far. There are three sides fighting over two spots, including Liverpool and Napoli. The pair played out a close encounter earlier this season, with the Italians stealing a 1-0 win. Can they produce a similar display here and make the last 16?

In order to qualify, Napoli need to avoid defeat. They can also go through with a narrow defeat and an away goal. If they lose 2-1, 3-2, 4-3 and so on, then the Partenopei are in the next round on their head to head record. A 1-0 win for Liverpool sees them edge it on goals scored, while a two-goal margin for the Reds gives them a head-to-head advantage. It’s by far the most complicated group remaining.

Adding to the complications are PSG, who head to Red Star on Tuesday. They need a victory to make it through, while a draw leaves them sweating on results elsewhere – a Liverpool win would then knock PSG out. The expensively assembled side are expected to decide their own fate, but this group hasn’t seen an away win in any of the 10 games so far. Red Star have claimed four points at home to Napoli and Liverpool, and we don’t think PSG will have it all their own way.

Both Liverpool and Napoli just need to focus on their own game, with their own agenda in mind. The Partenopei aren’t planning on parking the bus according to boss Carlo Ancelotti, and we’ve already predicted a high scoring clash. It should be a thrilling night of drama in both games. However, the Anglo-Italian battle continues elsewhere.

Inter Milan are facing Dutch opposition on Tuesday, but they have their eyes on Tottenham. There’s another clash between Serie A and the Premier League, with two sides fighting for qualification. While the Nerazzurri are at home this week, Spurs are bound for Barcelona. The two are basically neck and neck, so expect another tense couple of games.

Inter’s job seems pretty straightforward on their end, as they just need to beat a PSV side who have lost four of five matches so far. Inter won in their visit to Eindhoven earlier in the group, and now the Italians have to finish off the job in their final group game. Claim three points, and the pressure is on Spurs – the side who are currently second in group B.

A 1-0 victory over Inter at Wembley last time put Spurs into second place. They now have the head to head edge over the Italians, meaning if Tottenham win then they’ve wrapped up qualification. However, their task is much harder – as they face a trip to Spanish giants Barcelona. The Catalans have a wonderful home record in the Champions League, so much so that we’ve already gone for a Barca win.

Gerard Pique boosted Inter’s hopes, by saying that he and his teammates are focused on finishing the group with a victory. The Nerazzurri will be hoping they make good on their word. Even if Barca can just avoid defeat at home to Spurs, Inter should make it through. We’ve already backed an Inter victory, with the hosts desperate to continue their European adventure.

Old Lady to Give Young Boys a Beating

Juventus finish up their campaign in Switzerland, aiming to top their group. They have a two-point lead over Manchester United, so the Old Lady need a victory over Young Boys to be certain of taking first place. With hopes of winning the Champions League driving them, Juve will be expected to secure top spot, leading the way on 15 points.
We’re likely to see a changed up Juventus side, following their win over Inter Milan in a dramatic Serie A weekend. However, that shouldn’t impact the outcome all that much. Juventus should have enough in a rotated squad to see off a side with a point from five European games. Given how heavily backed the visitors are for the victory, it’s hardly a surprise that we’re expecting Juventus to secure a result.

Interestingly, Roma arguably have the most and least at stake on Wednesday night. They’ve already qualified, with Real Madrid unreachable at the top of their group. They head to the Czech Republic to wrap up a solid group stage with an impressive 12 points, but their European campaign will carry on regardless. Their manager, on the other hand, may not.

A four-game run without a win has added more pressure onto Eusebio Di Francesco. Roma have been inconsistent all season, and their poor campaign has brought reports that Antonio Conte is being chased for the job. While that would be an obvious step up, some would suggest it would be harsh to sack Di Francesco months after giving him such a young, promising squad to work with.

Roma are revamping their side, after clearing out some older names in the summer. They’ve lost their best three players in the last two summers, so they need to do something new. However, they also can’t afford to miss out on the Champions League, but they sit eighth in the table. Their form needs to improve, so Plzen is a must-win game for the Giallorossi.