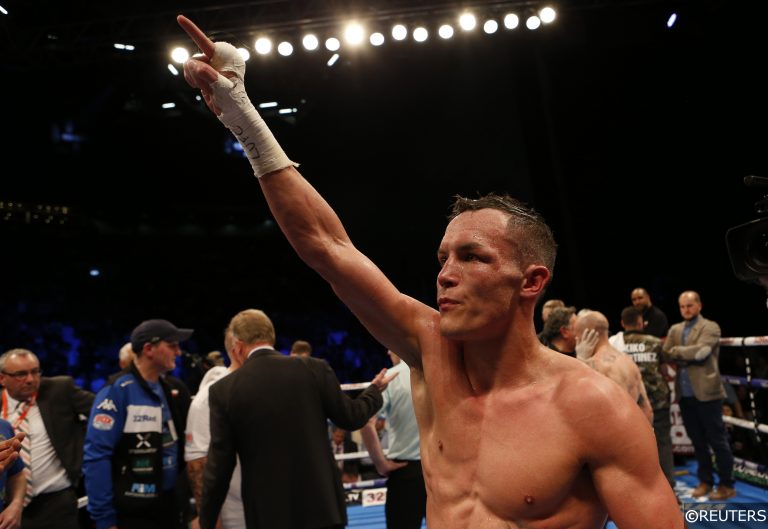 Josh Warrington returns to the ring on Saturday as he faces Kiko Martinez for the second time.

Warrington won via a majority decision when the pair met for the first time in 2017 to retain his WBC International featherweight title.

The Leeds native then went on to become a full world champion by beating Lee Selby to claim the IBF belt and he made three successful defences before a pair of disappointing outings against Mauricio Lara.

Warrington lost the first fight via a TKO in the ninth round and the rematch was ruled a draw after a cut to Lara saw that contest ended in the second round.

Warrington is bidding to become a two-time world champion but he faces a stern test against a resurgent Martinez.

The Spaniard, a two-weight world champion, holds the IBF belt Warrington lost to Lara after stunning Kid Galahad with a devastating sixth round stoppage in November.

The 36-year-old may be the current IBF champion but Martinez is rated as the 11/4 underdog ahead of the fight, with Warrington on offer at 1/4.

Where to watch Kiko Martinez vs Josh Warrington II

Saturday’s fight is being broadcast live on video streaming service DAZN, a monthly subscription to DAZN costs £7.99 a month in the UK.

Who is on the Kiko Martinez vs Josh Warrington II undercard?

Best Bet: Warrington to win by decision or technical decision at 4/5

Warrington won the first fight fairly convincingly with two of the judges scoring it 116-112 in his favour, with the third having scoring it level at 114-114.

The Briton’s loss to Lara is a concern and Martinez does possess real power after stopping Galahad so this is by no means a given for Warrington, but if this fight does go the distance he should be able to claim the decision victory.

Warrington is five years younger than the champion and has won 30 of his 32 fights, only falling short against Lara. Warrington has only managed to claim seven stoppage wins though, and Martinez has only been stopped four times in 55 outings, so a decision victory for the Leeds Warrior looks the most likely outcome.

There are a few cards taking place on Saturday, including a tough fight for Wales’ Lee Selby against rising Argentine star Gustavo Daniel Lemos in Buenos Aires, so this treble isn’t just the undercard of the Warrington vs Martinez fight.

Maxi Hughes defends his IBO world lightweight title for the first time against Ryan Walsh on the Warrington vs Martinez undercard and can claim a win on points.

Hughes has won his last five contests but has only managed one stoppage during that run, while only five of his 24 wins have come inside the distance. Walsh has only lost three of his 32 fights, with two draws, and has never been stopped.

Gustavo Daniel Lemos to win by KO, TKO or Disqualification vs Lee Selby

This one is a big call but I think Selby could be in for a tough night against Lemos in Buenos Aires.

Selby did last the distance against George Kambosos Jr. in his last outing and has never been stopped, but Lemos boasts an impressive knockout record and will have the full support of the crowd behind him in his hometown.

The 26-year-old has a perfect record with 27 wins in as many attempts and 17 of those have come inside the distance – including each of his last eight.

Selby is a big step up in class for Lemos but ‘El Electrico’ looks to be a man on the rise and a win here would put him in the mix for a world title shot, and he can make the most of that opportunity by winning inside the distance.