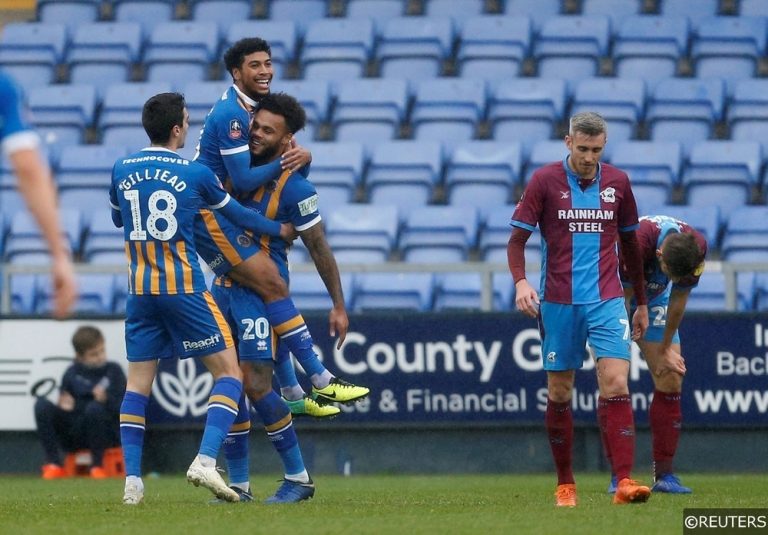 The League One season has reached its half-way point and what a first half of the campaign it’s been. The season has served up everything Football League fans expect and more; we’ve seen late winners, eight-goal thrillers, screamers, tap-ins, sending offs – the lot!

As things stand, Portsmouth currently lead the way in the third division, but the title race remains open, as both Sunderland and Luton are still firmly in the mix, while even the likes of Charlton, Barnsley and Doncaster cannot be ruled out at this stage. At the other end of table, there’s a whole host of teams involved in what is a compelling survival battle, that is for the neutral at least! At present, there’s only five points between 14th and 21st, so the relegation picture is far from clear at this point.

Before the season begun a case was made for Oxford to finish in the top six and Rochdale to finish inside the top half. The less said about that those two selections the better! The U’s endured a terrible start and while they have improved over the last few months, it’s fair to say that Karl Robinson won’t be leading his side into the play-offs this time around. As for Rochdale, well, Keith Hill’s men have been in and out of form since the word go. At times, they’ve looked good going forward and they do have a out and out goal-scorer in Ian Henderson, but they’re simply too up and down, while recent form suggests that avoiding the drop is the best that Dale can hope for this campaign.

Fortunately, while Oxford and Rochdale have both failed to deliver, Portsmouth are so far holding up their end of the bargain. Kenny Jackett’s men were put up at 14/1 to win the division before a ball was kicked. They’re now available at no bigger than 7/5. As they sit five points clear at the top of the table after 26 games, although there is still plenty of time for things to go awry on the south coast, Pompey have what can only be described as a favourites’ chance to go up as champions. Anyone who did get on at 14’s prior to the season has at the very least presented themselves with an excellent trading opportunity.

Elsewhere, both Kieffer Moore and John Marquis were singled out as viable top-scorer selections at 16/1 and 25/1 respectively. Marquis currently leads the scoring charts with 15, while Moore finds himself not that far behind on 11. Unsurprisingly, both players are now significantly shorter than their pre-season quotes, so if nothing else, punters who supported either striker prior to the season can trade out for a profit.

Shrews to move up the table

Moving forward, there are a couple of bets that stand out ahead of final 20 games of what has so far been an intriguing campaign. Firstly, ‘Shrewsbury to Finish Top Half’ makes plenty of appeal. As things stand, the Shrews, who didn’t get off to the best start, are currently four points shy of occupying a place in the top half of League One, but they’ve looked useful for some time and are a better side than their current position would have us believe. The underlying numbers suggest that they’re unlucky to not already be higher up the table.

Their draw against Championship side Stoke in the FA Cup at the weekend showed that the Shrews are anything but an easy team to beat. They lack the flair and attacking prowess of many of the teams currently in the top half, but they’re one of the best in League One when it comes to preventing the opposition from playing.

Another bet that stands out at a much bigger price is ‘Coventry to Finish Top Six’. Given the fact that the Sky Blues currently sit seven points below the top six, it’s a big ask for Mark Robins’ men to make the play-offs, though if we consider their overall performances and the numbers posted, then it’s easy to feel that 10/1 about them sneaking into May’s promotion shootout is on the large side.

Coventry currently rank as League One’s fifth best team in terms of expected goals against, while only two teams rank above them in terms of expected goals for. This tell us that Robins’ men are both creative and capable of nullifying an opposition threat. They boast a positive expected goal difference both at home and away. It’s clear that they’ve got the quality to compete at the right end of the third division, so if the Sky Blues can just turn promise into results on a regular basis, then they certainly won’t be far away from the play-offs once the season draws to a close.