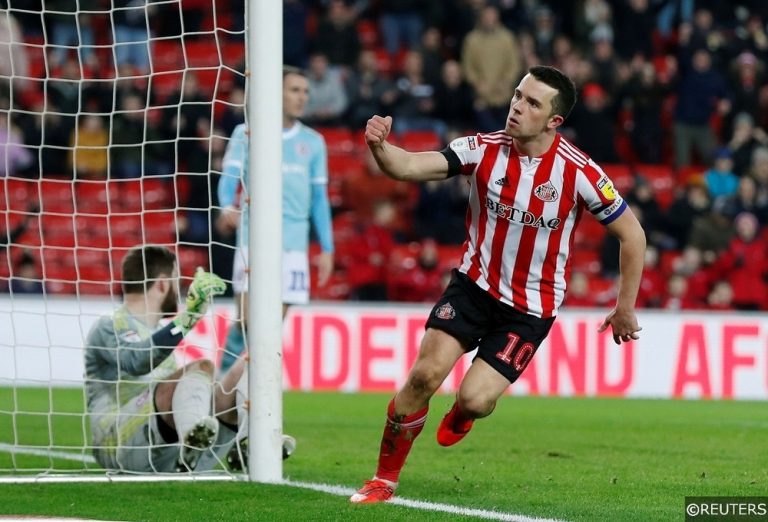 It’s been anything but a vintage campaign for Sunderland, who were expected by many to breeze through League One this season and return to the Championship without too much trouble. However, despite some pleasing early-season results, the Black Cats have never really looked liked front-runners for an automatic promotion spot, or at least they hadn’t until recently.

During the early weeks of the season, Sunderland, who travel to face Bristol Rovers on Saturday, were scoring plenty of goals, though it was easy to feel that luck was on their side, as they were consistently posting below par expected-goals for figures, which suggested that Jack Ross’ men would slow down in terms of goals scored unless they started to offer more in terms of creativity, and slow down they did. The Black Cats have scored in 100% of their League One matches, though because of a lack of creativity, they went ten games between late December and mid-February without scoring more than once. All the while, Luton and Barnsley were banging in multiple goals for fun. During that spell, Sunderland posted expected-goals for figures such as 0.38, 0.58, 0.69 and 1.07. On occasion, they were unlucky, though as they failed to regularly post high expected-goals for numbers, it’s relatively easy to see why they were finding it tough to punish teams. However, it looks like Jack Ross’ men have turned a corner.

A lack of both penetration and final-third productivity must have been pinpointed internally as a reason for Sunderland’s dip in form because the Black Cats have come out swinging in recent matches. They’ve only won one of their last three, but their much-improved attacking efforts suggest that they’re well and truly up for the automatic-promotion scrap. In each of their last three games, the Black Cats have created more than they did in any of their ten previous matches, as their recent expected-goals for figures of 2.89, 2.5 and 2.09 clearly show. They’ve also taken more shots at goal in each of those three than in any of their previous ten, which unsurprisingly, has allowed them to score more goals. Sunderland have scored more goals in their last two matches than they had in their previous five.

They will of course need to maintain such pleasing levels, but their recent efforts should pave the way for further attacking success.

See more teams that have been enjoying plenty of attacking success in our Match Goals Form Guide.

Can they go up automatically?

At present, Sunderland look to still be behind both Barnsley and Luton in terms of quality, but if they can produce the level of attacking intensity that they delivered against both Accrington and Gillingham, then that could soon change. The individual quality that Sunderland possess, especially in the final third, is undeniable. Will Grigg is an out-and-out goal-getter at this level, while George Honeyman is undoubtedly one of the best midfielders in the division. Add in the mercurial talent that is Aiden McGeady, who even now at the age of 32 has the ability to play at a level much higher than League One, and it’s not difficult to see Sunderland laying down a serious challenge for the top two, but they need to continue getting on the front foot, while they must use the forward quality they have to suffocate teams.

The bottom line is that Sunderland are good enough to go up, there can be no denying that, even if they’ve often disappointed this season. However, they need to continue approaching games as they have done in recent weeks. A more controlled/pragmatic approach cost them a lot of ground, so playing forward-thinking football is the way that Ross’ men can forge a path to promotion.