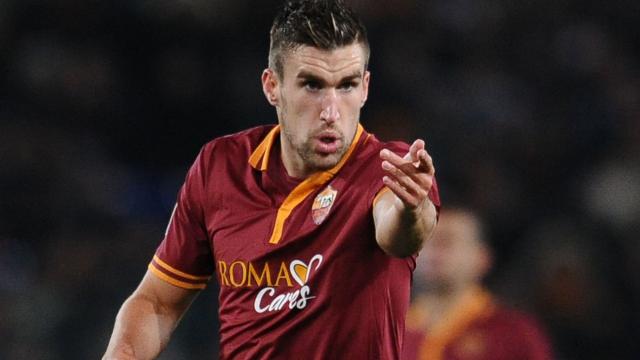 Van Gaal will hope to build his team around midfielder battler Strootman, if he can overcome injuries.

Manchester United are set to launch another spending spree as we head into the new year, with a midfield trio consisting of Nicolas Gaitan, Enzo Perez, and Kevin Strootman looking like the main targets of an £80 million raid.

Despite spending a net total of £113 million during the summer transfer window, Louis Van Gaal still feels his squad is lacking in the midfield department.

With Angel Di Maria, Radamel Falcao, Daley Blind, Luke Shaw, and Marcos Rojo among Manchester United’s summer acquisitions, one would be forgiven for thinking they will take it easy in January.

However, the Benfica pair of Enzo Perez and Nicolas Gaitan have caught Van Gaal’s eye this season, and the two are believed to be close to agreeing a deal with the Manchester club which would see Benfica collect over £50 million.

Long term target Kevin Strootman is also hopeful that he can complete a move away from Roma in January, despite his long term knee injury hampering his progress. If he can pass a medical, Strootman is likely to move to United in January in a deal worth £30 million.

While United fans may feel they don’t need more players in the ilk of Gaitan, the prospect of securing a battleaxe midfielder such as Strootman or Perez will be a welcome one.

Manchester United aren’t just thinking about January though, they have also begun planning their summer spending, and it certainly doesn’t seem to be settling down.

Not content with breaking a British transfer record upon signing Angel Di Maria for nearly £60 million, United are planning to break it again by securing the services of Gareth Bale.

It is very unlikely that they can sign Bale in January, but the Glaziers have apparently given the go ahead to Van Gaal for a summer signing of the Welsh star.

Real Madrid are likely to want most of their £80 million outlay back if they are to sell Bale, but this hasn’t deterred Manchetser United’s owners, who look to be building an English Galactico team.