NBA Weekly Round Up 8th February 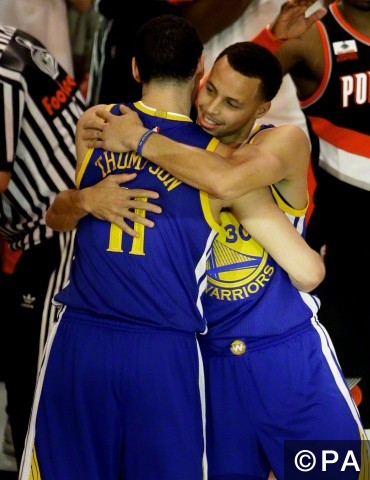 It was All Star Game weekend this weekend in the NBA, which meant there was an abbreviated week of action on the hardwood. The skills competition, dunk contest and the three point shootout all took place before the marquee bonanza of talent in the All Star Game itself Sunday night. All Star weekend this year took place north of the border at the Air Canada Centre, home of the Atlantic Division leading Toronto Raptors.

While this year’s All Star weekend was arguably one of the most entertaining in years, that doesn’t mean that it did much to showcase the game. If nothing else, it showcased the fact that All Star Games are the epitome of glorified scrimmages where neither team plays any kind of defense and physicality is limited to lifting cups of Gatorade during called and media timeouts. So, if you like seeing games where teams are firing up uncontested shots and scoring looks like when you fire up NBA Live on your Xbox, then this weekend was for you.

With that said, let’s take a look at what unfolded in the league this week and what to expect going forward.

Splash Brothers Face Off in 3 Point Shootout Final: Last week, when we talked about the upcoming events of All Star weekend, I mentioned that it would be a stunner if the winner of the 3 Point Shootout was anyone other than a member of Golden State’s backcourt of Klay Thompson and Stephen Curry. That duo has drilled a combined 406 three pointers in the regular season: Curry leads the league with 245 bombs while Thompson is 2nd in the league with 161 treys of his own.

As it panned out, it was a mere formality that one of the Splash Brothers would end up winning the shootout as they met in the final. Curry had a stretch of 13 consecutive makes in the shootout, the second-most in the history of the 3 Point Shootout. He hit his first seven shots in the final and finished with 23 points, which was the highest total on the night at that point. The problem was, he shot first in the final. Thompson drilled eight straight shots twice in the final round and ended up hitting 19 of 25 shots en route to 27 points and the title. For the night, Thompson hit 37 of 50 attempts from beyond the arc, a sizzling 74 percent. He’s shooting 42 percent from three point range in the regular season. Phoenix’s Devin Booker finished third in the contest.

Curry set the NBA record for three pointers in a season with 286 last season. With 30 games to go in the regular season, he’s within 41 threes of tying that mark and 42 of surpassing it. It’s not a matter of IF he’ll beat it, it’s a matter of when and ultimately, by how much when all is said and done.

LaVine Slams the Competition in Dunk Contest: Normally, at least in recent years, the majority of the field for the Slam Dunk contest features guys that normally reside on the bench during the vast majority of minutes in games. Granted, Blake Griffin won the competition back in 2011 and is a perennial All Star (when he’s not getting in fights with members of the training staff and breaking his hand) but he and Wizards point guard John Wall, who won the contest in 2014, are the biggest names in the past eight or nine years.

The field has definitely thinned out talent wise from previous years. In the heyday of the dunk contest, fans got to see some of the league’s marquee players take part. Michael Jordan and Dominique Wilkins both won a pair of dunk contests with Jordan winning back to back in 1987 and 1988 while Wilkins took titles in 1985 and 1990. Spud Webb thrilled the crowd in 1986 and few will forget Larry Nance winning the inaugural contest back in 1984 or Kenny “Sky” Walker taking the crown in 1989. Heck, even Kobe Bryant won the title in 1997 and Vince Carter took the crown in 2000. Still, lately it’s been fringe guys: Nate Robinson is the only player to win it three times while Harold Miner and Jason Richardson have claimed a pair.

Zach LaVine of the Minnesota Timberwolves joined the small group of repeat winners in the Slam Dunk Contest as he managed to defend his crown Saturday night. In the final, LaVine managed to outlast Aaron Gordon of the Orlando Magic in an electrifying finish that had the world talking. The final went to two extra tie-breaker rounds after LaVine and Gordon put up matching 50s on their first dunks. After matching 50s again, Gordon ended up with a 47 on his second dunk of the dunk-off round while LaVine’s between the legs dunk from the free throw line brought another 50 and the title.

Kevin Hart’s Entertaining Return: Kevin Hart was the reigning four-time MVP of the Celebrity All Star Game during All Star weekend but announced his retirement after last season’s game. The NBA couldn’t pass up the opportunity to have him involved in this year’s contest so he was tasked to coach Team USA against Team Canada in the contest. It seemed that Hart took his retirement seriously…for about a half. Then, in the third quarter, he pulled a pro wrestling staple, coming out of the tunnel ready to compete.

Hart came out to the theme from “Rocky” and it’s fitting: at 5’4, Hart clearly is an underdog against most people that play in these contests. He scored five points but Team USA was beaten 74-63. Hart didn’t comment about whether he was pulling a Michael Jordan with “I’m back” or if this was a one shot deal. Still, kudos to him for making things entertaining in a game that features a lot of people that have as much business being on a NBA floor as you do.

West Wins the All Star Game With Offensive Bonanza: This year’s version of the NBA All Star Game seemed to be brought to you by Xbox when you play on easy difficulty against the computer. Sure, they get their fair share of points but your team scores effortlessly and literally at will. So went this year’s game, which set a ridiculous record as the game shattered the over/under line of 318 as the West emerged with a 196-173 victory in the contest.

Nine players for the Western Conference scored in double figures while Klay Thompson finished with nine. Seven players were in double figures for the East with two other players chipping in nine points apiece. All 24 players in the All Star Game contributed on the scoresheet with Paul Millsap of the Atlanta Hawks being low man on the totem pole with three points. Russell Westbrook finished with 31 points, eight rebounds, five assists and five steals to pace the Western Conference while Anthony Davis had 24 points on 12 of 13 shooting in 15 minutes of action. Paul George led the Eastern Conference with 41 points while John Wall added 22 off the bench.

The teams combined for 286 field goal attempts, knocking down 157 of them. They were a combined 51 of 139 from beyond the arc as the West hit 31 of 80 from long range while the East drained 20 of 59. There were a combined seven free throws in the contest. The East won the points in the paint 96-88 but the West had a 44-30 edge in fast break points and forced 24 turnovers in the game. You won’t see a game anywhere close to this final score anytime the rest of the season so make sure you keep the game on your DVR or catch it online if you want to enjoy the no defense mentality.

The NBA will have three more days to rest as action doesn’t return to the hardwood until Thursday. That’s also when the trade deadline comes around, at 3 pm ET, so we’ll round up any big deals that go down in this space next week! Make sure you check out our free NBA picks when the action returns on Thursday night!