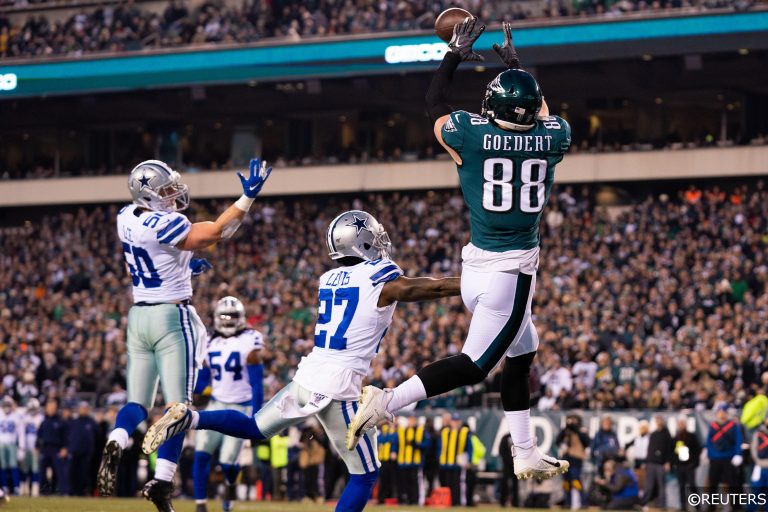 This week’s NFL round gets underway on Thursday night as the Eagles make the trip down south to a dysfunctional Houston Texan side that have won just once this season.

Our NFL expert Mark Brown has been looking into the opener to bring you a tasty-looking 10/1 Bet Builder!

This is a terrible matchup for the Texans, a dysfunctional organisation that is short on talent and facing one of the league’s true powerhouse teams just four days after a demoralising loss, at home, to their division rival Tennessee Titans.

The unbeaten Eagles, meanwhile, enjoyed the luxury of resting their starters for much of the second half in their blowout win against the Steelers on Sunday, and it would be surprising were this game to result in anything other than a lopsided win. We’ll tease the spread down a little to -10.5, however, in case the starters are again on the sidelines come the fourth quarter.

The Texans are challenged offensively, while it’s easy to see the Eagles again taking their foot off the gas late, so it would be a surprise were this one to climb into the 50s points-wise. We’ll tease the number up to 55.5 and take the under, helping to build the bet up.

Philadelphia has averaged an eye-popping 18 points in the second quarter this season, often taking a minute to get going before unleashing a scoring explosion in the 15 minutes before the half, and that trend can be expected to continue against a far inferior opponent here, although feel free to contribute towards this leg of the bet builder as well Texans!

The Eagles boast an historically good rushing attack whereas the Houston Texans lead the league in the rush yards allowed through eight weeks, and have to drag themselves up off the canvas just four days after being steamrolled for over 300 yards by Titans duo Derek Henry and Dontrell Hilliard.

Facing Philadelphia’s elite run-blocking offensive line and a fresh Miles Sanders (just 9 carries for 78 yards and a TD vs Pittsburgh) spells trouble, with Sanders strongly fancied to surpass the alternate total of 70 yards and find the endzone once again.

Jalen Hurts is the final leg of the bet, the dual-threat QB taken to eclipse 25 yards on the ground. Houston had trouble dealing Justin Fields back in week 2 and Hurts boasts similar running ability to the Bears QB.

The third-year man put on an aerial show against the Steelers on Sunday, but is expected to show off his wheels this week on a fast, indoor track.