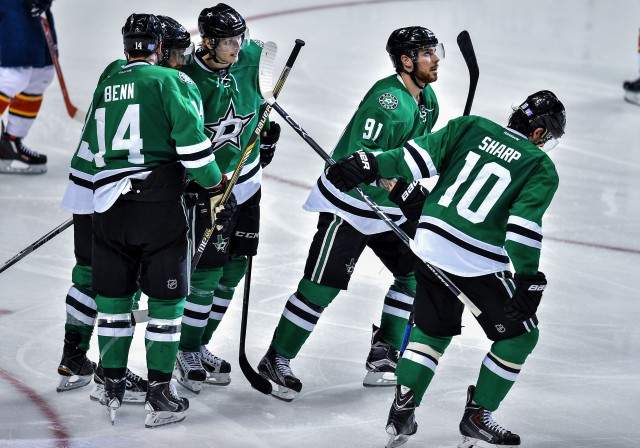 The NHL season gets a break for Christmas as there are no games on Christmas Eve and Christmas Day to give the players and coaches an opportunity for rare quality time with their families. At this point in time, every team in the league has played a minimum of 33 games and a few teams have played as many as 36. The race for playoff spots is going to likely go right down to the wire as is the usual trend. That will leave some teams on the outside looking in as the playoffs begin, leaving fan bases across the continent heartbroken as they enter wait until next year mode.

We’ve already taken a look at the potential favorites in the Eastern Conference Contenders as far as making an extended run in the postseason. In that piece, we identified the Washington Capitals and the New York Rangers as viable contenders to represent the Eastern Conference in the Stanley Cup Finals and potentially hoist the Stanley Cup at the end of the season as the champions of the National Hockey League.

With that in mind, it’s only fitting to take a look at who may emerge as a top level contender in the Western Conference. Who is best suited to make a deep run in the Western Conference playoffs, potentially reach the conference finals or end up as the representative in the Stanley Cup Finals? Let’s take a look at the best options that the West has to offer at this point in time and who should be there in the postseason.

Dallas has had a hot start under head coach Lindy Ruff as the pieces they picked up have combined to roll to the lead in the Central Division. The Stars are 26-7-2 on the year for 54 points and currently hold an eight point lead over the St. Louis Blues in the division. Dallas is two points ahead of Washington for the league’s top record at this point in time. It’s a major improvement over last season, when the Stars finished 41-31-10 for 92 points. While that was their second highest point total since 2007-08, Dallas has missed the playoffs in six of the past seven years; they lost in the first round in their lone appearance.

The Stars have won three straight and are 7-2-1 in their last 10: they are coming off a 4-0 whitewash of the Blackhawks Tuesday night. Dallas is lighting the lamp on a regular basis as they have dented the twine 124 times this season; that number is 19 more than anyone else in the league. Jamie benn has been terrific with 22 goals and 46 points on the year while Tyler Seguin has 19 goals and 27 assists to tie Benn for second in the league in scoring. Patrick Sharp and Jason Spezza are veteran top six forwards that are capable of lighting the lamp and helping Dallas win games. The blueline group has been bolstered by the addition of John Klingberg, who has five goals plus 27 assists for 32 points and is a +14 on the year. Alex Goligoski, Jordie Benn and Johnny Oduya are solid defensemen that are solid in their own zone.

Dallas may still have a question mark in net as they don’t have a veteran presence with a good postseason track record in the mix. Antti Niemi has appeared in 23 games and posted a 15-5-2 record with a 2.30 GAA, a .915 save percentage and three shutouts on the year. Kari Lehtonen has played in 16 games and posted a record of 11-2-0 with a 2.66 GAA and a .910 save percentage. Whether Jim Nill pulls the trigger on a deal to bolster his team remains to be seen but Dallas has plenty of reasons to be optimistic going forward.

The postseason hasn’t been overly kind to the Blues in the past as they haven’t been to the Stanley Cup Finals since reaching it their first three years in the league. Of course, the Blues had success in those seasons because they were lumped in with the rest of the expansion teams so they were simply the best of a bad bunch. The Blues have had a good start to this season but they will have their work cut out for them as they are in the Central Division. St. Louis is 21-11-4 for 46 points but stands eight points behind the Dallas Stars for the top spot in the division.

In that competitive Central Division, the Blues are only six points ahead of Nashville in the Central. The bad news on top of that is that the Predators are the fifth place team in the division. St. Louis was expected to take a minor step back after dealing T.J. Oshie to Washington in the offseason. It has hurt them offensively as St. Louis is only 19th in the league in scoring as they average 2.5 goals per game. Only three Blues have double digit goals on the season, led by budding star Vladmir Tarasenko, who has 22 goals and 38 points to lead the team. Only Alexander Steen (11) and David Backes (10) are also in the double digit goal scoring group. Paul Stastny needs to deliver more than the three goals and 10 assists he put up in 20 games.

The defensive side of things has been very good for St. Louis this season as the Blues are 6th in the league allowing 2.3 goals per game. Led by solid defensemen like Kevin Shattenkirk and Alex Pietrangelo, the Blues play a solid defensive oriented game. Carl Gunnarson has been a nice addition to the group as well and Jay Bouwmeester rounds out the group and gives the Blues a solid top four to work with. Guys like Troy Brouwer, Scott Gomez, Scottie Upshall and Steve Ott are good at forechecking and keeping the puck out of the defensive zone. The Blues have plenty of physical players that will bang and try to influence the way the game plays out.

St. Louis let Ryan Miller go in free agency after he failed to impress down the stretch last season and that hasn’t hurt the Blues. Jake Allen has stepped up as the starting goalie and he’s delivered: in 27 games, he’s posted a 16-8-2 record with a 2.06 GAA, a .928 save percentage and five shutouts already. His strong performance has rendered Brian Elliott almost an afterthought: Elliott is 5-3-2 with a 2.40 GAA and a .913 save percentage in 13 appearances this season. If Allen can keep up his hot start to the year, the Blues could be a solid threat to be reckoned with in the playoffs.

Other Potential Teams in the Mix

The Chicago Blackhawks are the defending Cup champs and have won two of the last three and three of the last six Stanley Cup titles. With guys like Patrick Kane, Jonathan Toews and Duncan Keith still in the mix, one can never count the Blackhawks out of the mix. Toews has struggled to just 11 goals and 10 assists in 36 games but Kane (league leading 50 points, 26 game point streak earlier this year) and Artemi Panarin (10 goals, 21 assists) have picked up the slack. Corey Crawford (18-9-2, 2.22 GAA, .925 save percentage, 5 shutouts) is the anchor in the nets.

The Los Angeles Kings have good weapons and won the Cup two years ago. Los Angeles will need to come up with some solid secondary scoring options as the Kings can’t keep winning games 1-0, 2-1 or 3-1. Johnathan Quick is going to have off nights from time to time and the Kings can’t rely solely on him shutting the opposition down and grinding to a low scoring victory. Still, experience goes a long way and the Kings have it.

It will be an interesting race to find out who gets to the playoffs and how they unfold but these teams are the forerunners as Western Conference champs right now. Feel free to chime in with your thoughts about how you think things will unfold.  If you want free daily NHL betting tisp then head over to our tips home page for the today’s tips!