No one celebrates winning titles better than Bayern Munich

After winning four titles back-to-back since 2012, you would be forgiven for expecting their title celebrations to be a little subdued, not this mob…

Bayern Munich finished their incredible season in the Bundesliga with a 3-1 home win over Hannover on Saturday.

They finished the Bundesliga season having only lost two games and ended 10 points clear of their rivals, Borussia Dortmund.

It was another outstanding season under Pep Guardiola who is waving goodbye to the Allianz Arena to join Manchester City. The Germans sure showed him a great farewell.

They started with a traditional trophy presentation on the pitch after the game but it soon turned in to a massive beer fight.

In Germany, winning the title is often accompanied by masses of beer and Saturday in Munich was no different.

Instead of drinking their massive glasses of beer, the players and the staff threw it all over each other in an epic beer fight on the pitch. 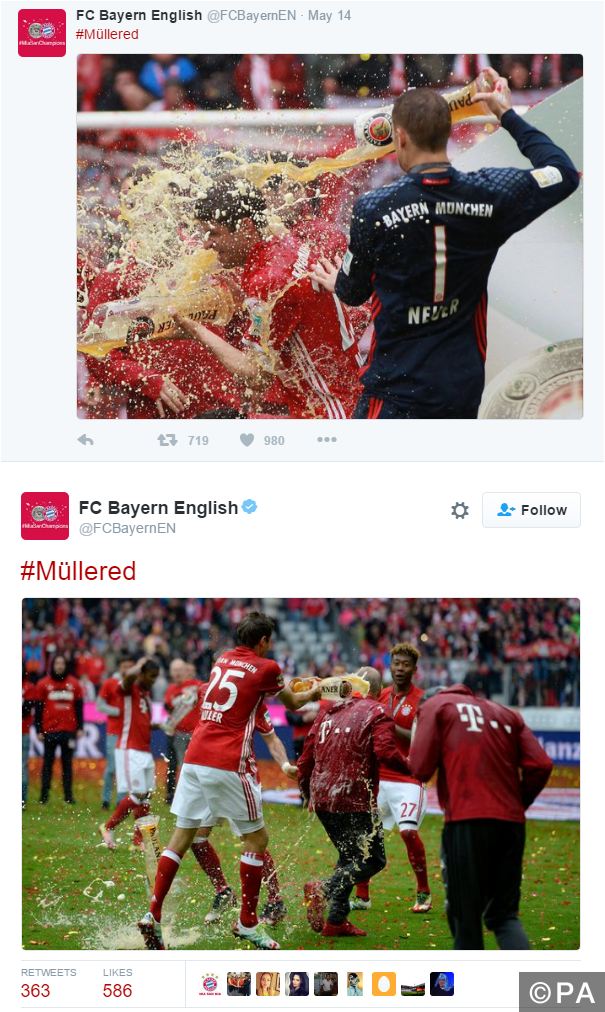 Jerome Boateng posted a video of him and his teammates showing off their dance moves in the changing room.

They weren’t great but it’s still pretty funny and it shows that this Bayern Munich team has got great chemistry.

The celebrations then moved on to the city centre where the team were greeted by more than 10,000 fans all awaiting them so they could join in the party too.

Not long to wait now…the CHAMPIONS are coming! pic.twitter.com/HCRWi7aVQn

Thomas Muller led everyone in a classic Bayern Munich chant. Even the players’ wives and girlfriends joined in. Absolute scenes!

The celebrating continued long in to the night as the team went to a local club where OneDirection played a set for the German champions.

You’ve been hit by, you’ve been struck by a smooth criminal! #Müllered pic.twitter.com/YbUcSLV7Yh

The players made the most of the celebrations whilst they could but they’re such a good team that they’ve still got another trophy to compete for as they face Borussia Dortmund in the German cup final on Saturday.

Neuer: “The celebrations are over now. From today we are fully focused as we prepare for the #DFBCup final! #FCBBVB

If you’re having a bet on Bayern Munich’s last match then take a look at our Bayern Munich vs Borussia Dortmund betting tips which will give you all the information you need for the big game.