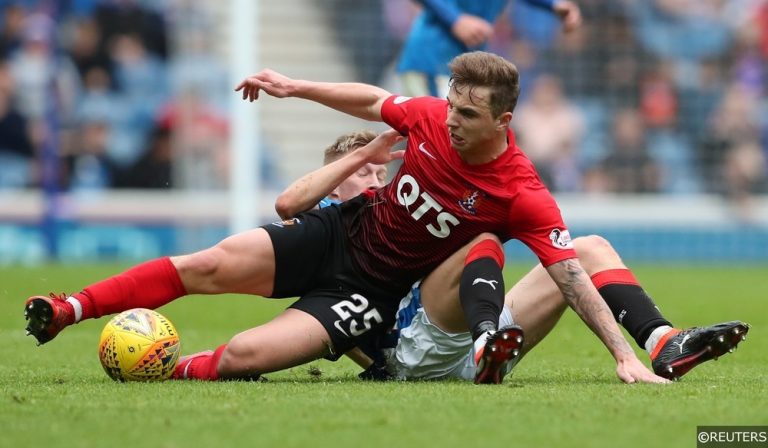 Kilmarnock finished 5th last year in the Scottish Premiership under the guidance of Steve Clarke. Can Killie keep up their great form this season?

Ones to watch: Kilmarnock

There’s no team in Scottish football as of right now that has beaten all odds like Kilmarnock have. 365 days ago, the club had just lost to St Johnstone, who had finished in 4th place the last time. The previous season saw Lee McCulloch, who had taken over as interim manager following the sacking of Lee Clark in February 2017, guide his team to safety- but only just.

This initial defeat on the opening day of the new season paved the way for a terrible start to the league for the ex-Rangers player’s side, so much so that he only managed to win a mere 3 points from the initial 8 games- none of which were victories. McCulloch was quickly sacked and replaced with Paul McDonald, who finally managed to break Killie’s bad run with a 2-0 win over Partick Thistle. Shortly after, McDonald would be replaced by the already confirmed new boss Steve Clarke as permanent manager on the 16th of October. His prior experience as assistant manager includes time with Jose Mourinho, lifting 2 Premier League titles, two FA Cups and 2 League Cups with the Portuguese. Clarke would then go on to lead West Brom to their first ever 8th place finish in the league-their best in 32 years- and leave them before dabbling in and amongst other English clubs.

Clarke had a difficult task at hand. The fact Kilmarnock had dropped so many points meant that they were bottom before their first victory with McDonald but moved from that spot afterwards. The next two weeks for Killie were full of hard fixtures: they were to play Rangers, Celtic, Hibs and Hearts- arguably 4 of the best SPFL teams in the league.

Clarke managed to secure 5 out of a possible 12 points from those fixtures, including away games at Ibrox and Celtic Park that both ended as draws, a loss to Hibs the following week and rounded off with a win at Tynecastle in the dying moments of the game. The Clarke effect was in full swing.

From that moment, the club grew and got better as the season went by. Veteran striker Kris Boyd was in magnificent goalscoring form- despite being 33 years of age. After a 2-1 over Rangers at Christmas and a 1-1 draw at Easter Road, the club saw itself sitting in 6th place, and it was looking like they would be staying up.

Killie didn’t slow down either, and after losing to Aberdeen 3-1 in their first game of the new year they went on an unbeaten run that started with a 1-0 win against Celtic, and they didn’t know defeat until mid-April, aby which point they were sitting comfortably in 5th place, where they would stay for the remainder of the season.

It’s hard for Killie fans to imagine that they would be in this position a year ago. The appointment of Clarke has been a sensational one, and the Scotsman did so well that he was awarded the Scottish Football Writers’ Association Award for his achievements, as well as being presented with the Scottish Premiership Manager of the Month on three separate occasions.

It’s unclear how well Clarke and Kilmarnock will do this season- but anything other than relegation will yet again be considered a success for the club as a whole. Killie failed to lose a single game in pre-season, also winning their League Cup group and progressing through to the next round after topping it undefeated- which is always a good sign. They’ve started off on the right foot in the league with a win over St Johnstone. Their opening fixture left Kilmarnock with the feeling that they could have done slightly more in the match, seeing as Clarke’s side managed to record a whopping 19 shots durong the game, 11 of which ended up going on target. The goals were scored by defender Scott Boyd, who managed to tap the ball into the net after the St Johnstone keeper fumbled with the ball after a well-worked set-piece, and Mikael Ndjoli, who finished off a great counter-attack move with a stunning strike from the edge of the box in the last minutes of the game, sealing the win for his side.

The signing of young Ndjoli is already proving to be a successful one, and if Kris Boyd manages to keep his fitness up then it’s going to be another season full of goals for the striker. This season might see Kilmarnock make a push for European football, and with teams like Aberdeen and Rangers potentially playing until at least December in the Europa League, Clarke could encourage his team to take advantage of the extra game time these clubs will be having until the new year rolls around.

If they somehow manage to better their performance this time around, don’t expect Clarke to be their manager that much longer- because the experience he gained down in England will prompt clubs to come knocking for him once again.