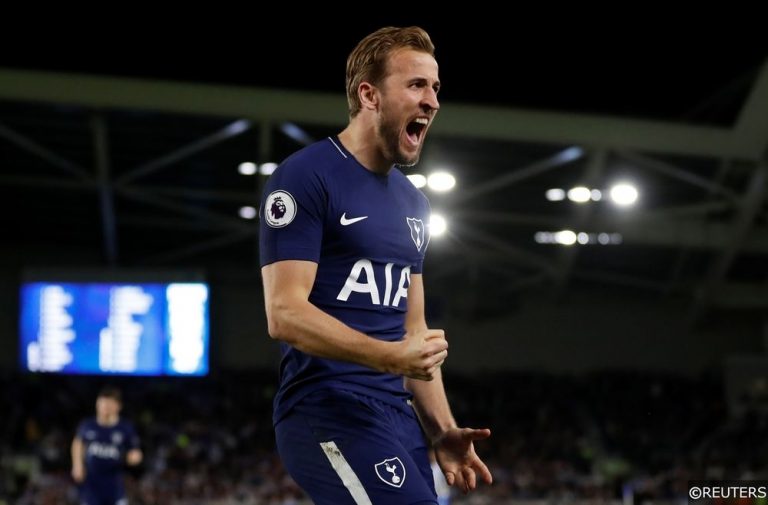 Mohamed Salah took the Premier League by storm last season, with his 32 goals in his debut season for Liverpool breaking a number of records and halting Harry Kane on his pursuit for a third consecutive Golden Boot award. But can the Egyptian attacker replicate his impressive form in the coming season, or will Kane return with a vengeance after claiming the World Cup Golden Boot? Read on for all our Premier League top goalscorer predictions and tips.

For the past three seasons it’s been impossible to discuss the Premier League Golden Boot winner without mentioning Harry Kane’s name. The 24 year old striker captained England in the World Cup this summer and took away the coveted Golden Boot, and now he’ll be looking to reclaim the same crown in the Premier League.

Despite Salah overshadowing him last season, Kane still managed to break a number of long standing records in the Premier League. He scored 39 league goals in 2017, surpassing Alan Shearer’s record of 36 Premier League goals in a calendar year despite playing six fewer games than Shearer. Overall he netted 56 goals in 2017, a tally that made him Europe’s top goalscorer for club and country. This was the first time that somebody other than Lionel Messi or Cristiano Ronaldo had won that accolade since 2009.

Kane certainly can’t be accused of taking his foot off the gas either. Since his breakout season in 2014/15 for Spurs, Kane has improved upon his previous season’s league goalscoring record every year. It started with a 21 goal haul in 2014/15, with 25 coming the following season and 29 in 2016/17. Last season he hit the elusive 30 goal target, the first Spurs player to do so since Clive Allen in 1987.

He may be the favourite, but we still think he offers a lot of value at 11/4. He has shown incredible consistency in front of goal since breaking into the first team, and at just 24 years of age he’s still striving to improve. His haul at the World Cup will have boosted his confidence even further, and he definitely looks the safest bet considering Salah only has one proven season in the Premier League.

Arsenal bolstered their strikeforce back in January with the capture of Borussia Dortmund’s pacey striker Pierre-Emerick Aubameyang, and fans of The Gunners will be eager to see how he can perform in his first full season at The Emirates. Whether he can keep pace with the established Premier League strikers remains to be seen, but the early signs are definitely promising and at 7/1 he looks a great value bet.

Aubameyang only had the chance to start twelve Premier League games for Arsenal last season, but despite the difficulties of coming to a new league halfway through the season the Gabon man still scored ten goals. Prior to that he had already netted 13 Bundesliga goals in 16 appearances for Borussia Dortmund, and this impressive goals to game ratio extends back throughout his career.

He also has the added benefit of fitting right into Unai Emery’s expected tactical setup. At PSG, Emery employed a 4-3-3 setup that looks like it would work perfectly at The Emirates, and Aubameyang, Alexandre Lacazette, and Henrikh Mkhitaryan suit his high pressing and fluid attacking system very well indeed.

Raheem Sterling at 66/1 Each Way

If we’re selecting a dark horse to come from further back in the pack to win the Premier League Golden Boot, Raheem Sterling is right at the top of the list. The Manchester City winger was maligned throughout the World Cup for his lack of end product and finishing ability, and many Manchester City fans bemoaned the same problems last season.

However, this inadequacy in Sterling’s game is sure to drive him to work on that area, and if he can improve his finishing the prospect is terrifying. Sterling, despite missing a host of chances, scored 18 goals in 33 Premier League appearances last season. This is by far his best season yet, and he certainly seems to be flourishing under Pep Guardiola’s tutelage.

This 18 goal haul was enough to put him 5th in the Premier League goalscoring charts, and with bet365 paying out four places on an each way bet this looks incredible value. If Sterling had buried even half of his missed chances he would have been up there with Kane and Salah challenging, and if he works on his finishing there is a very good chance he could be challenging for the Golden Boot come the end of the season.