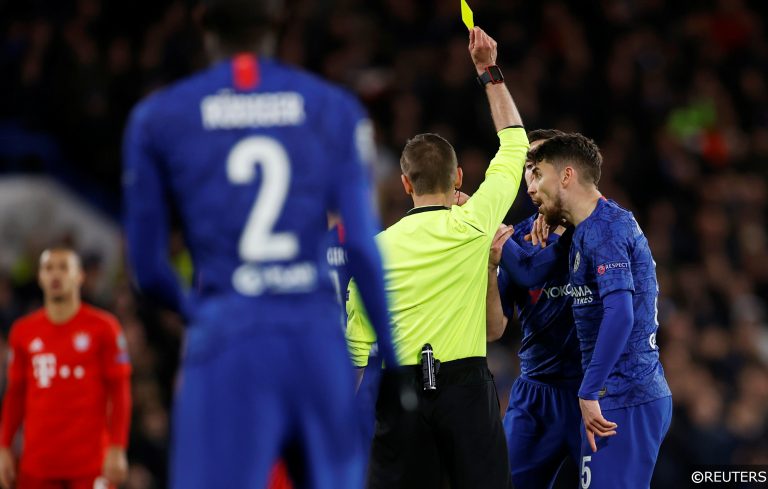 There are four Premier League games taking place on New Year’s Day and I’ve picked out my best cards and corners bet for each fixture.

You can use these in your own accumulators or as part of a bet builder for any of the given games, or back them all in one 27/1 four-fold below.

Read on for my best cards and corners bets, and remember to check out our Premier League Match Predictions section for detailed analysis and tips ahead of this weekend’s fixtures.

The early kick off is the standout fixture of the day as in-form Arsenal entertain runaway leaders Manchester City at the Emirates Stadium. City have been a good team for fans of the overs market in terms of corners this season, and I’m expecting over 10 in total when these two heavyweights meet on Saturday.

City are averaging a league-high 8.89 corners per-game this season and they have been fairly consistent in that regard both at home and away. Pep Guardiola’s men are averaging 8.78 per-game on their travels but they also concede more (3.89) and with Arsenal winning 6.22 per-game at home and their home games averaging over 10 per game in total these two teams should be able to combine for at least 11 on Saturday.

This is one of the bigger calls on this four-fold accumulator, but there is a real chance both teams will see at least two players pick up a card when Norwich head to Leicester.

Norwich are in mid-table when it comes to cards dished out and receive on average exactly two per-game. The Foxes are better behaved and pick up 1.59 per-game, but recently disciplinary issues have been creeping in. Leicester have seen at least two players booked in three of their last five games, while Norwich have the same record over the same period, and as such both teams to receive 2+ cards at a big price looks worth the risk here.

This is another big call but Watford may be able to win the ‘corners match bet’ by taking the most corners when Spurs visit on Saturday. The Hornets are averaging a not-too-shabby 4.88 corners per-game at home and Spurs average 4.17 on their travels.

Watford have also won the corners match bet in two of their last four home games, despite facing Manchester United, Chelsea, Manchester City and West Ham and losing three of those matches.

If this four-fold is still running when the late game gets underway I’ve opted for an odds-on selection to see it over the line with both Crystal Palace and West Ham to pick up a card when they meet at Selhurst Park.

In The Mixer: Experts pick their 2022 breakthrough stars