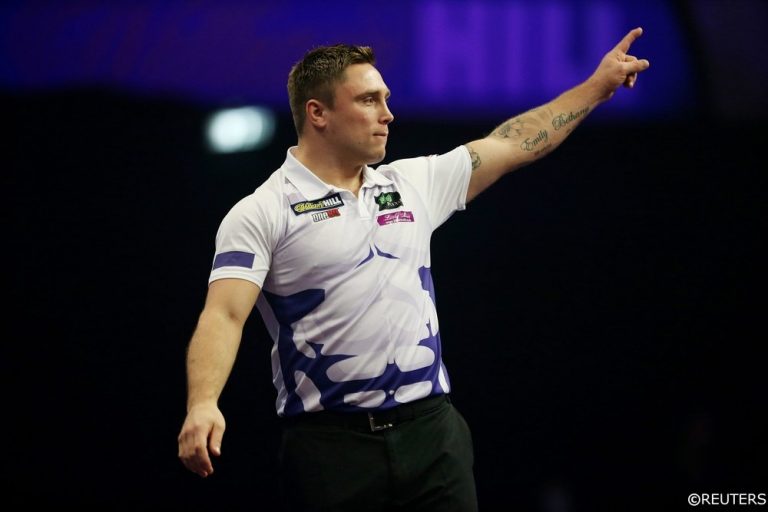 Our second darts acca landed in a week on Thursday night – this time at odds of 8/1 !!!

Our first selection from night five of the Premier League was James Wade, who was up against Northern Ireland’s Daryl Gurney. Wade beat Michael van Gerwen in the Premier League last week whilst Gurney had been struggling for form, particularly on the ProTour, so we were confident of a victory for ‘The Machine’. Gurney got off to a slow start, and Wade broke immediately to take a 1-0 lead, which he doubled when comfortably holding his own throw. The Englishman took out a spectacular 158 finish in leg three and held throw once more to take a commanding 4-0 lead. Wade continued to put the Gurney throw under pressure, an 11-dart leg broke ‘Superchin’ once more and there was no way back for Gurney. Wade won the next two legs to complete the whitewash and get our evening off to the perfect start.

Our second pick was Gerwyn Price to beat Mensur Suljovic; the controversial Welshman has been in the form of his life recently, and was the only unbeaten player heading into week five of the Premier League. As with the previous game, our selection got off to the perfect start, breaking the Suljovic throw and then holding his own to take a 2-0 lead. The next two legs went with throw, but Price then hit finishes of 127 and 82 to take a 5-1 lead. The players then traded holds of throw and with the score at 6-3 Price was throwing for the match. It was a scrappy final leg, but Price got the job done to round off a 7-3 victory. It wasn’t the most impressive scoring performance we’ve seen recently from ‘The Iceman’, but he hit seven of his nine doubles, and never really looked like losing this contest.

Our final selection was for Peter Wright to beat Raymond van Barneveld. On the face of it neither player was in particularly good form having both lost their last four matches, but Wright had shown enough at the UK Open to warrant our support against an out-of-form ‘Barney’. The game started with both players holding their throw, but Wright was able to get the early break in leg three to lead 2-1. ‘Snakebite’ started to up his game, winning the next three legs in 13, 12 and then 11 darts has his average climbed over the 100 mark. The Dutchman held his throw in leg seven, but Wright responded with a superb 10-dart leg to move within one of victory. Again ‘Barney’ held throw, but with the darts, Wright was able to secure victory, posting an impressive 107 average, whilst hitting 50% of his doubles.

A fantastic night of darts was rounded off when local favourite John Henderson restricted Michael van Gerwen to a 6-6 draw to send the Scottish fans home happy, almost as happy as backers of our 8/1 acca !!!