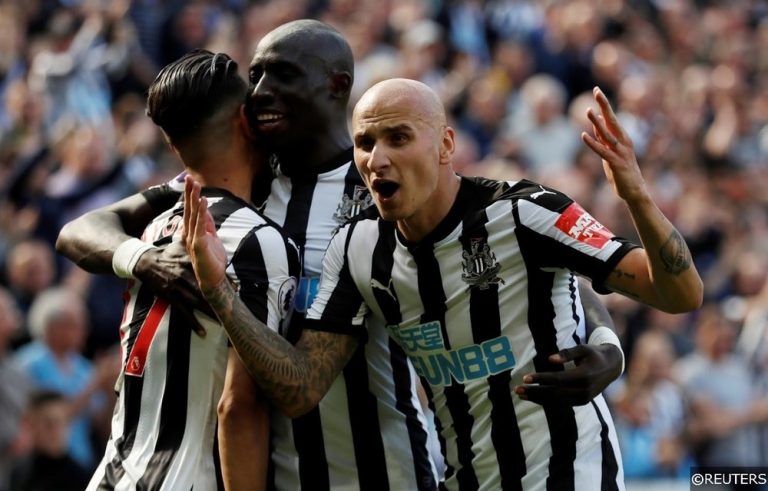 Having already shattered the notion that possession football is king, and confirmed through in-depth statistical analysis that teams generally do drop more points after mid-week European excursions, we thought it was about time that we gave another of the game’s familiar tunes a good going over.

This time we chose to test the validity of the often referenced, Premier League second season syndrome. We will try to figure out whether second season syndrome is an actual thing or whether it’s just a clichéd construct used to pad out the air between strangers making football small talk.

Of course, the information we have gathered should be of particular interest to Newcastle United, Brighton & Hove Albion and Huddersfield Town fans who might be worried that the survival their clubs secured last season was a false positive and a precursor to inevitable doom. The data could also prove useful for those looking for an angle when perusing Premier League survival odds.

What is “Second Season Syndrome”

Second Season Syndrome isn’t an aversion to summer, it’s a name given to a perceived common regression in the performance of teams in their second Premier League season that eventually leads to their relegation.

It’s often hypothesised that newly promoted teams who survive their first season at the top of the English football period, enter a stage of rapid depreciation in their next season at that level.

Typical examples include: “They have been found out”, “they were an unknown quantity last year”, “the euphoria and adrenaline of promotion kept them up last year – that’s gone now”  and so on and so forth.

But what does the data say? Does Premier League Second Season Syndrome have any basis in reality? 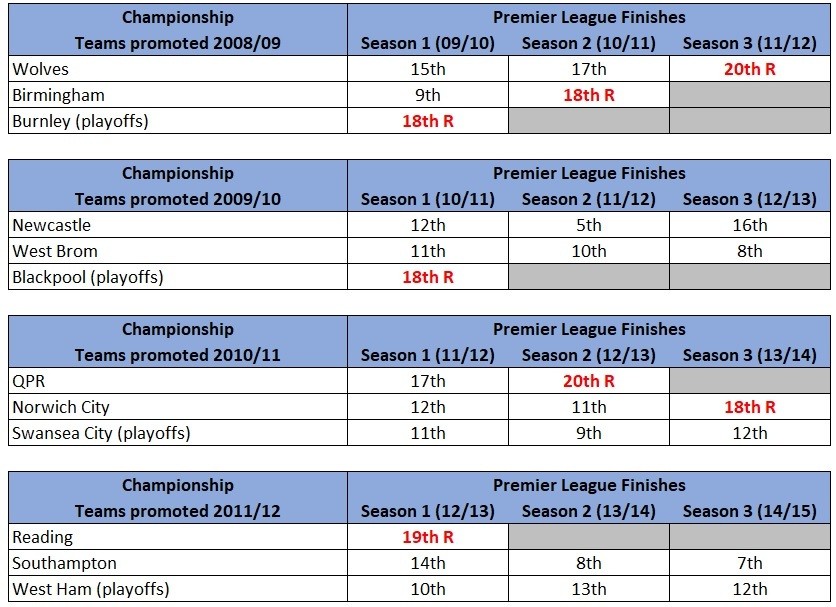 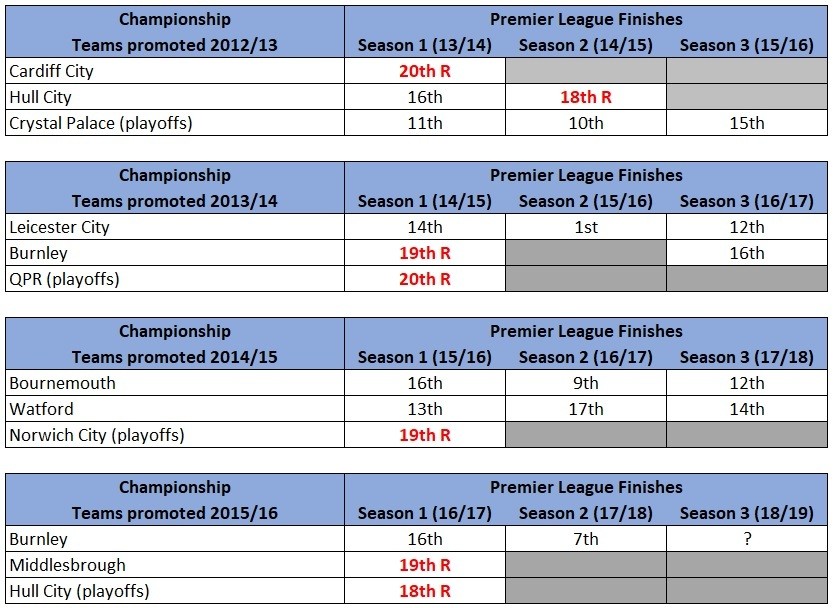 Let’s start by stripping out the teams who yo-yoed between the Championship and the Premier League inside the space of a year. Of the 27 teams promoted from England’s second tier to the country’s top flight (2009/10 to 2017/19), 9 went straight back down at the first time of asking.

On average, 33.3% of the teams promoted from the Championship in that period went straight back down.  However, last season was only the second time all three promoted teams managed to avoid Premiership relegation during the same time span (2009/10 to 2017/18).

In 2017/18, Newcastle, Brighton and Huddersfield emulated the heroics performed by QPR, Norwich and Swansea in the 2011/12 Premier League season.

Those numbers would suggest that First Season Syndrome is much more potent contagion than it’s Second Season relation, but that’s a different article.

Relegated in their second season

In the next stage of our analysis, we have to remove last season’s promoted teams from the equation, because….well……they haven’t had a second season to have a syndrome in yet.

Between the 2009/10 and 2016/17 Premier League seasons, 15 of the 24 teams promoted from the Championship survived their first campaign with the big boys.

In total, just 20% of the clubs who made it past their first Premier League season between 2009/10 and 2016/17 were dumped out of the league after their second year there. That’s an extremely low number.

Second Season Syndrome a Myth – but what about THIRD season syndrome?

There is little evidence to support Second Season Syndrome or even Second Season Sniffles over the past decade, but what happens promoted teams who survive all the way through to their third successive Premier League seasons?

Our sample size is reduced a little further to incorporate relevant data only, as the teams who maintained their top-flight status and beat the Premier League relegation odds from 2015/16 onwards are only entering their third successive top-flight campaign in 2018/19.

There are two exceptions however; Middlesbrough and Hull City were two of the Premier League’s relegated teams in 2016/17 having spent just one season in the division and are therefore included in our data set.

If that hasn’t twisted your noodle too much, here is the result of our convoluted number juggling: Of the 23 relevant clubs promoted to the Premier League between 2010/11 and 2016/17, 15 or 65.2% of them had returned to the Championship in three seasons or less. Ouch.

The next time you over hear some colleagues or strangers discussing Second Season Syndrome and throwing around their ill-informed Premier League relegation predictions , feel free to guffaw loudly and dismissively. For maximum effect, we recommend you wait for their hollow retort before showering them triumphantly with the facts and stats we have presented here.

Our research shows that since the start of the decade, Second Season Syndrome isn’t really a thing at all and it definitely shouldn’t be feared.