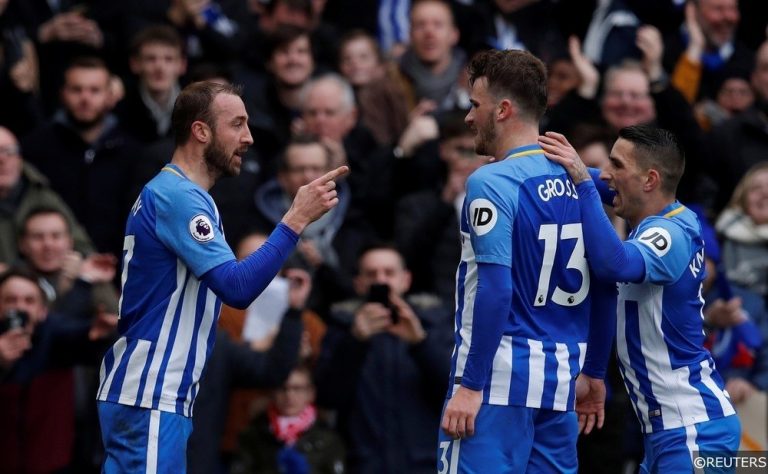 Survival is the name of the game for Brighton & Hove Albion in 2018/19 as the Seagulls look to cement their place in the Premier League this season.

As one of the league’s new boys last year, Brighton were widely expected to struggle from the outset with observers and pundits tipping the Seagulls to make a swift return to the Championship.

Chris Hughton’s side defied the critics however, maintaining a highly competitive edge throughout their first ever Premier League campaign. Reputations were enhanced and points were proved, demonstrating Brighton’s ability to mix it with the bigger names.

Despite only securing their safety in the 3rd last match of the season with a 1-0 victory over Manchester United, Brighton never really looked like returning to the Championship at the first time of asking.

The Seagulls built much of their success on strong defensive foundations and tactical discipline last term, finishing the season with the 9th best defensive record in the division.

Ever the realist, Chris Hughton would jump at the chance to claim another 15th placed Premier League finish in 2018/19. However, with the other Premier League teams more in tune with how Brighton operate this time around, having a similar impact on the league in their second season might prove difficult.

Brighton paid around £9m to sign Brazilian fullback Bernardo from Bundesliga side RB Lepizig. The versatile 23-year old can play on either the left or right-hand side and can also fill in further up the pitch. Bernardo is the archetypal Brazilian defender in that he loves to join in with attacking phases whenever possible. At £9m, the Sao Paulo born fullback could prove to be one of the bargains of the summer.

During their inaugural Premier League campaign, Brighton turned the Falmer Stadium into a veritable fortress. Just 4 of the visiting 19 Premiership teams left the south coast with maximum points in 2017/18, though paradoxically, the Seagulls performances on their own patch were almost a complete inverse of their displays away from their own ground.

Brighton finished the 2017/18 EPL season with the worst away record in the league, winning just 2 of their last 19 matches on the road in total. In addition, no club scored fewer times on their travels than the Seagulls last year, who managed to hit the net just 10 times.

Naturally, this is an area where Chris Hughton will be looking to improve and while preserving their superb home record will be his priority, their over-reliance on collecting points at the Falmer Stadium could be their undoing.

They might sound more like a hideous Boyzone/Blue crossover act, but Duffy and Dunk established themselves as one of the best performing central defensive partnerships in the Premier League last season.

The pair were united for the first time in 2016, when Shane Duffy was signed from Blackburn Rovers for a then club record £4m. The Derry-born stopper immediately forged a fabulous understanding with Brighton youth product, Lewis Dunk at the heart of the Seagull’s rearguard.

Duffy and Dunk provided a combative, no-nonsense defensive platform for Brighton in the Premiership last year and between them, they missed just one league game during the 2017/18 season.  Shane Duffy made more average clearances per game (8) than any other player in the division last year.

Keeping that iron-forged partnership together will be key to Brighton’s chances of survival again this season.

Largely operating in the space between midfield and lone striker Glenn Murray, Groß used his expert appreciation of space and wonderful weight of pass to lay on 8 Premier League assists for his teammates. The 27-year old chipped in with 7 goals of his own to boot, capping a terrific first season in England.

Groß’s performances earned him a landslide win in Brighton’s Player of the Year Awards and with a full season’s Premier League experience under his belt, the German is expected to have an even bigger impact in 2018/19.

Brighton scored just 34 times in the Premier League last season, the 4th lowest total in the competition. Their average of 0.89 goals per ninety minutes in 2017/18 is a stat that’s bound to have  had Chris Hughton’s analysts concerned, though the Seagulls have at least been making moves in the transfer market to try to rectify the problem.

Just this week, Brighton parted with a club record £17.1m to sign right-winger Alireza Jahanbakhsh from AZ Alkmaar. The Iranian enjoyed a phenomenal season in the Netherlands in 2017/18, finishing as the division’s top scorer with 21 goals. The 24-year old also racked up 12 assists from his wide berth, pushing his productivity statistics through the roof.

Of course, standards in the Dutch Eredivisie aren’t as high as they once were, with the league producing more transfer duds than studs in recent years. Examples of players failing to replicate their Eredivisie performances in the Premier League have been plentiful, though Brighton will hope their gamble on Jahanbakhsh pays off.

Brighton’s chief goal getter last season, Glenn Murray, turns 35 in September and though the veteran’s commitment isn’t likely to wane, the physical attributes that he builds his game around might. Murray would do well to replicate the 14 goals he hit last term. To help take some of the goalscoring pressure off his shoulders, Brighton moved to sign Romanian striker Florin Andone from Spanish side Deportivo La Coruna in May.

The attacker, who’s fond of a nutmeg, started just 16 times in La Liga last season during Deportivo’s ill-fated relegation campaign. The 25-year old scored just 7 times in total and Brighton will need him to improve significantly on that number in the Premier League.

2018/19 is shaping up to be the season where the Seagulls have their wings clipped. Their inability to win points on the road coupled with their lack of cutting edge in forward areas is a dangerous mix. Much depends on the how the impact their new signings make, but as things stand, relegation and a return to the Championship is a distinct possibility for Brighton.