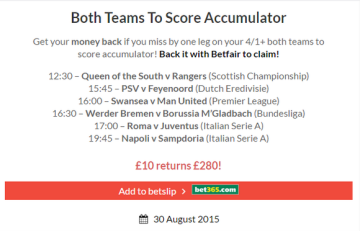 FST turned the phrase “Super Sunday” into a reality last week as they landed another huge accumulator.

On Sunday, we landed our Both Teams to Score accumulator at a HUGE 27/1, Here are the teams that made up this incredible win.

Next off we visited The Netherlands as two title rivals PSV and Feyenoord went head to head, 1-1 at Half-time meant we progressed to the 3rd leg nice and comfortably.

Premier League up next as Swansea hosted the Red Devils and at Half-time it was looking slightly nervy with the score still 0-0. We were rewarded for our patience as 2 goals in the first 15 minutes of the second half alleviated any nerves.

3 down, 3 to go and we were off to Germany, Like the Dutch game in leg 2, this was quick and painless as both Werder Bremen and Borussia Monchengladbach got on the score sheet before Half-time.

The penultimate leg saw reigning Serie A champions Juventus visit a much fancied Roma side at the impressive Stadio Olimpico. Goals from Pjanic and Dzeko sent Roma into a 2-0 lead and time was running out until new Juventus signing Dybala popped up with a consolation goal for the visitors, crisis averted.

The final game of the accumulator saw 2 clubs with new managers come head to head as Napoli hosted Sampdoria. It was all Napoli in the first half and they took a deserved 2-0 first half lead as the clinical finishing of the mightily impressive Gonzalo Higuain proved once again why he is one of the best strikers around. Thankfully Sampdoria came out in the second half a completely different team, and when Napoli commited a foul in the box in the 58th minute it was left to Eder to stick the penalty away. He duly obliged and landed the final leg of our Both Teams to Score accumulator.

As expected loads of our followers were on our Acca, Here are some of the winning bet-slips from our social media feeds! Follow us on Facebook and Twitter today! 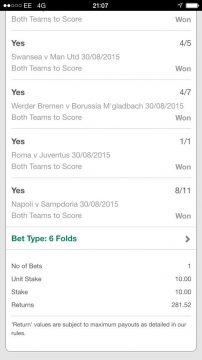 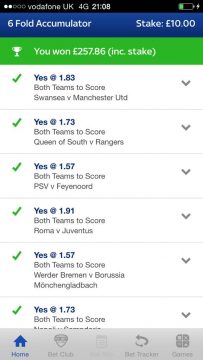 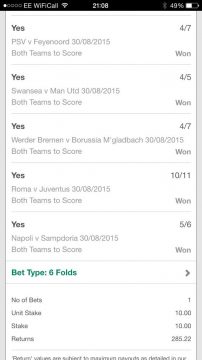 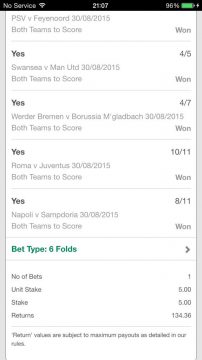 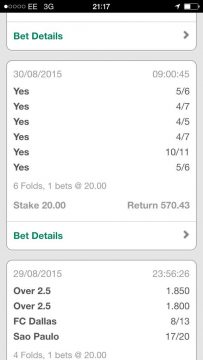 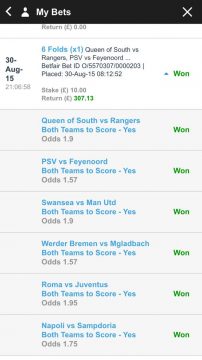 One follower accidentally backed it twice! What a lucky mistake to make! 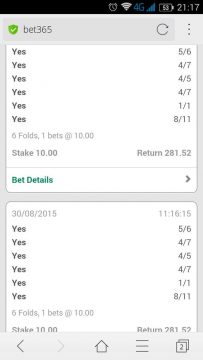 Want to follow our FREE both teams to score tips? CLICK HERE to check out today’s accumulators from our expert tipsters!